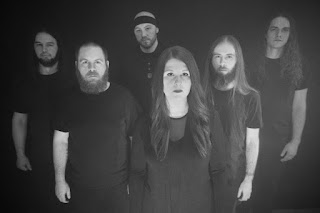 
Mike: We tracked the drums last April, I believe. I was simultaneously working on the new album, Revenant, for my other band Inferi. That pushed things back a bit and we didn’t get to finish recording the album until almost 10 months later. Now that it is almost out, we’ve been rehearsing a lot for several live performances coming up. We will be making our first appearance in Europe this year at Metaldays in Slovenia! I’ve also been toying around with some demo ideas for the next album too.


Emily: I have been working on the travel details for our European trip, rehearsing, and working like crazy.

2.In July you have a new album coming out, how would you describe the musical sound that is presented on the recording and also how does it differ from the stuff you have released in the past?


Todd: I think this record is a pretty well balanced blend of Oubliette’s sound, though I think we’ve upped the ante a bit since the last record. Apparitions was mainly Mike and Emily, so this one has more input from the rest of the band. To me, the aggressive sections on this record are a bit more in your face. We talked about a lot of things when putting this record together, in relation to the story line and really wanted the music to match the emotions of the lyrics. I feel like we really accomplished that.


Mike: It’s along the same lines as the previous, but we incorporated some new elements to the sound. For example, Todd has this guitar pedal from Electro-Harmonix called the Mel 9, which is a mellotron simulator. I think about half of the songs on the album have at least one section using that pedal. It gives a synthy choir and/or strings type of sound, which we are digging hard!


3.This is your first album in 4 years, can you tell us a little bit more about what has been going on during that time span?


Mike: When we released Apparitions, it was just a studio project. Since then, we have had to make a few lineup changes since everyone in the band couldn’t commit to being a live member. We spent a long time writing The Passage and also with our other bands. My band Inferi has also been pretty active since then so sometimes it has been a struggle balancing it all!


Emily: We are all very busy so it can be very difficult to find time to sit down and write together. Hopefully it won’t take 4 years for another release!

4.The lyrics on the new recording are a concept album, can you tell us a little bit more about the story line you bring into the lyrics?


Mike: We became sort of fascinated with the customs surrounding death in the Victorian era and built a story around it. A family moves into a house on a cursed land. The baby falls ill and dies, which causes the mother to fall into a never-ending depression. She thinks that she sees her child “invite” her into death, so she kills herself but never ends up reuniting with the child. The Victorian aspect was more or less just a setting in the end, but there are quite a few references to that period and can also be hinted at on the album cover.


5.What is the meaning and inspiration behind the name 'Oubliette'?


Mike: The word “oubliette” is a French word that translates into something like “a place to be forgotten,” but it is actually the name for a type of old deep dungeon, with only one door at the top. I felt it very fitting for our style… and not to mention the reference from the movie The Labyrinth.


Todd: We’ve been very lucky to play with some truly amazing bands over the short time we’ve been a live band. Playing with Imperial Triumphant a couple of times has been a real highlight for me personally. I really love what those guys are doing. Playing with our friends in Anagnorisis when they were promoting their last record Peripeteia were some amazing nights. Opening for Alcest was easily my favorite show we’ve played, though. Incredibly nice people and it was an absolute joy to share the stage with them. Our stage performance is a mix of subdued and aggressive all at once. We generally play with minimal lighting and a lot of fog. We focus heavily on the music and less about what band members look like. It’s all about delivering a high quality musical experience. Having said that, we all give 100% onstage every time.


Emily: I run a promotion company (Invictum Promotions) here in Nashville and because of that, I have been able to put us on some amazing shows. I agree with Todd, my favorite show was with Alcest.  The crowd was amazing and Alcest was easily some of the nicest guys I’ve ever worked with and they really enjoyed our set! They even invited us to get beers with them at a nearby bar after the show.


Andrew:  All the shows have been great.  Perturbator, Alcest, The Body & Imperial Triumphant have all been highlights.  I think my favorite has to be when we opened for Belphegor, Origin & Abigail Williams here in town.  Very heavy bill for us to be on.  We were the only band of the night to use any clean guitar tones and every time we’d get to a clean part the crowd would cheer and go nuts.  It definitely felt great.


Mike: Playing with Alcest was fantastic, as the others mentioned, but I’d also like to mention the show with Perturbator. The bill was fabulously mixed!


7.Do you have any touring or show plans once the new album is released?


Emily: Mike will be doing some touring with Inferi later in the year so we plan on doing a few short runs regionally but that is all we will be able to do in 2018.

8.A few years back you had also done a 'Dissection' cover, what was the decision behind doing your own version of one of their songs?


Emily: Mike was originally planning to cover “Thorns of Crimson Death” with Inferi but after some discussion, we felt it to be a more appropriate cover for Oubliette.  They are my favorite band and we wanted to pay tribute to them. It also coincided with the 20th anniversary of Storm of the Light’s Bane.

9.On a worldwide level how has the feedback been to your music by fans of melodic black and death metal?


Todd: We’ve been really quite surprised by the response to our music, especially overseas. People seem to really enjoy what we’re doing and we’ve had great response to our output.


Mike: I agree with Todd; I think at least half of the interest has been from overseas.


Todd: I’m in a blackened doom band called Battle Path. We’ve been around for close to 8 years and are currently working on our fourth album.


Andrew:  I also sing and play guitar in a Black/Death band called Ophiuchus.  We are celebrating our 10th anniversary this year and hope to have our 3rd album ready to record sometime later this year.  I also teach guitar, mandolin & bass.


Mike: I play guitar in a tech death band called Inferi, which has been doing well lately. We have been around for quite some time but have really started to become active this year. We just released our fourth album and are touring in support of it this year. We recently did a tour with Alterbeast, Grindmother, and Aethere. Another tour is about to begin with Rivers of Nihil and Alterbeast, and we should have some other things popping up later this year.


Todd: I think we’re all into pushing the boundaries of what we do, while staying true to the sound of Oubliette. We all have some progressive leanings musically, so, I personally could see more of that creeping into our music.


Emily: I’d like to stay true to our melodic sound and I don’t think we’ll ever stray from that.


Andrew:  I’m not sure, but I’m looking forward to it.  I don’t think we will be taking much of a break once the record is out.  Mike is already showing us riffs for future songs.


Mike: I’m just always thinking about what we can do to further take advantage of having three guitarists. I know it seems weird to a lot of people, but we are trying to utilize it in the most effective way. I plan on exploring those options more.


Todd: Several us are very big fans of Bolzer’s “Hero”. That gets listened to quite frequently. It’s also safe to say bands like Blut Aus Nord and Alcest are big influences on what we do.


Mike: My big influences as of the last couple of years have been Kauan, Insomnium, and Alcest. I’m not sure how well that reflects in our music but it definitely gets me in the zone to create something new! Lately I've been spinning the new releases from Uada, Gruesome, Monotheist, and Slugdge.


Emily: I’ve always had a passion for animals. Mike and I have 3 dogs and a cat.  Other than music and animals, I love nature and being outdoors whenever possible.


Andrew:  Work and spending time with my wife and animals are the main things.  Playing video games is one of the few hobbies I’ve had longer than playing music.  I also enjoy reading and amature video editing and recording.


Mike: Food, animals, and outdoors. Other than that, I probably am too busy with musical interests!


Todd: We appreciate anyone who likes what we’re doing. Our music means so much to us and we love that it’s resonating with people.


Emily: A huge thanks to anyone that has supported us thus far!

Posted by OccultBlackMetal at 7:13 PM