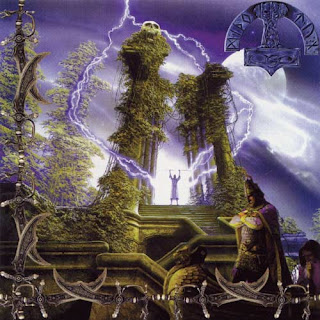 Mithotyn where a melodic pagan/viking/black/death metal band from Sweden and this is a review of their 1997 album "King Of The Distant Forest" which was released by Death Records in collaboration with Invasion Records.

Drums have a mixture of slow and mid paced playing with some fast drumming and blast beats, while the keyboards have a very atmospheric and medieval  feel with a pan flute as well as some other folk instruments being utilized on occasions, while the bass playing has a very powerful and dark feel to it and you can actually hear that instrument on this album.

Rhythm guitars are very melodic with some fast black metal riffing and some slow parts that have a doom metal feel, while the lead guitars are very pagan/epic sounding with a lot of melody that is heavily influenced by classic metal.

Vocals are mostly high pitched black metal screams with some death metal growls being utilized at times and there are also a lot of clean singing viking choir vocals being used at times, while the lyrics cover mostly Asataru style themes with some anti christian lyrics, as for the production on this recording which was recorded at Los Angered Recording during November of 1997 sounds very professional and you can hear all of the instruments that are present on this album.

In my opinion Mithotyn where a very talented and underrated viking metal band and this is a classic album, if you are a fan of melodic viking/black/death metal you should check this band out. RECOMMENDED TRACKS INCLUDE "Hail Me" "On Misty Pathways" "Under The Banner" and "The Vengeance". RECOMMENDED BUY.

https://www.metal-archives.com/bands/Mithotyn/364
Posted by OccultBlackMetal at 2:10 PM No comments: