Against The Plagues Interview 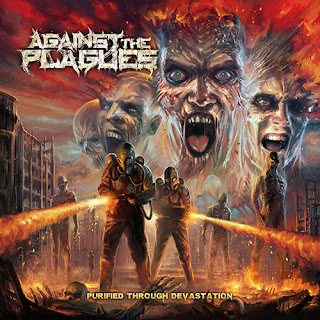 Shaun ~ Currently the band is preparing to hit the road and do some touring in support of our recent album "Purified Through Devastation" which was released December 18th on Non Serviam Records in the Netherlands. We are doing as much independent promotion as we can to showcase the new lineup and updated music. We are very excited to get on the road and perform live. We have been taking time to launch the album and prepare everything for a strong 2016!

2.You have a new full length coming out in December, how would you describe the musical sound that is presented on the recording and also how does it differ from the stuff you have released in the past?

Shaun ~ The sound we strived for on this album was something brutal, but catchy and memorable. ATP has always embraced a darker and dramatic, melodic style, which we wanted to preserve, but with new members and new times, we ended up with something more punishing than the last. We don't really try to fit any one type of mold,. We are an Extreme Metal Band, covering many facets of the brutal, dark and melodic spectrum. Purified Through Devastation is kind of self explanatory in that we as individuals, as a band, as a race, are constantly destroying and rebuilding. A sick cathartic measure in means of survival.

3.What are some of the lyrical topics and subjects the band explores with the newer music?

Shaun ~ Purified Through Devastation is comprised of songs from a demo called Quaternion that ATP released before I joined the band and newer material written by the current lineup. I wrote the lyrics for TerrorForm, Enblightened, Extermination Event and All Flesh Had Corrupted. I was given the freedom to make some adjustments to Man's Modern, World, Theokratia, Enemy Herein and Praetorian Icon. I basically turned the album into a concept album that talks about the modern age and how Mankind on the brink of extinction. A failed creation (the human race), a vile species that plagues the earth with their self destructive ways. The only chance for survival is to eradicate the virus and exterminate everything. Only then can we rebuild. Man's Modern World is the thesis song of the album, setting the scene for the terror which unfolds. All Flesh Had Corrupted is a tale of the first time man was corrupted by divine knowledge, thus becoming a catalyst for lust, greed, war and self destruction. Abandoned by our creators we lash out in defiance. Praetorian Icon is a song of rebellion. Revolting against the brutal dictators who are enslaving our species. Theokratia is about corruption in religion and religious law implanted in government and state. Controlling through religion is a method of enslaving weak minds and has been responsible for countless innocent lives throughout history. TerrorForm is a hybrid word I created as a play on words inspired by terraform. TerrorForm bares multiple meanings but the idea is a planet enveloped in terror. Chaos, war and disease. Extermination Event is the brutal decision to wipe out mankind and send it into oblivion. Falling Further is a calm note after the destruction of everything. Enblightened is the dim light of darkened hope. The larva phase. Submerged in darkness and writhing in the pain of the sacrifice needed to survive. Lastly The Enemy Herein is a recap on how we have been the enemy all along. Self destructive and set out for power, driven by greed and fueled by a disgust for our creators.

4.What is the meaning and inspiration behind the name 'Against The Plagues'?

5.In the beginning the band had more of an international line up but on the new album all of the band members are from the U.S, is it a lot more easier to get music recorded and play live shows this way?

Shaun ~ Yes. We are all centralized in the Chicagoland/Northwest Indiana region. Our main headquarters are in Calumet City Illinois, which is convenient for all of us to get together and have regular rehearsal, in person discussions and build the much needed momentum to take our chemistry and musicianship to the next level.

Shaun ~ The shows that stand out for me have to be our show with Nile as direct support. We played right before Nile in Joliet IL at a venue that was known as Mojoes at the time. It was a packed house, very involved and responsive crowd full of energy! It was a great night and Nile was amazing! Very cool guys too. We also had the honor of opening for Destruction and Sepultura on Sepultura's last Anniversary tour. Our more recent show was opening for Cannibal Corpse, Cattle Decapitation and Soreption this past Halloween! It was a sold out show and one of the most memorable shows to date! Our live performance is evolving more and more as we continue to add to our arsenal. We have a full color backdrop, and two full color stage scrims. We use  the obligatory foggers and lights to set the mood. Each song is complimented by ambient interludes and segues. We try to incorporate an element of drama and suspense to our live performance. As we evolve we hope to increase the dynamics of our show.

Shaun ~ We have several touring options in the works and will include dates all over the US and Canada. We are booked to play several Festivals across the US for 2016 and many more in the works! All tour dates will be officially announced through Varyen Entertainment and Non Serviam Records so be sure to like us on your preferred social media network and stay updated on all developments!

8.The new album is coming out on 'Non Serviam Records' can you tell us a little bit more about this label?

Shaun ~ Ricardo Gelok and the team at Non Serviam Records have been very supportive and professional in helping to push this album and promote us to the fullest. We are very grateful to have a personal relationship with Ricardo. He is always reaching out to each of us personally and working with us to achieve the best  results for all parties involved. We are very happy to be working with Non Serviam!

Shaun ~ Honestly so far I am very pleased and kind of shocked at the enthusiasm behind our recent album! We have been contacted by several fans from all over the globe expressing their appreciation for our art and we couldn't be happier. We literally walked through infernos to get this album released. We wanted this album to have high quality production and spent alot of time rehearsing as a band to be tight. For the most part this album is very raw in contradiction to the polished final product. Vocally, most of these tracks are live straight through one take runs. Of course I took time to layer a few things and add backgrounds but all in all, I strived to capture the aggression I put out in our live performances.

Shaun ~ Currently everyone in ATP is fully focused and involved in only ATP. Although Milo our bassist does fill in for bands like Wolfpack 44 and Coven, as well as tribute bands in our local area.

Shaun ~ Against The Plagues will always be an Extreme Metal band. Expect heavy, epic, melodic, and versatile. Our next album will most likely have alot of different elements to it, for it will tell a new story. We don't stick to one formula. We write and play what we feel and what is true to us. Our music is driven by intense stories of real conflicts and full of pure emotion. Our passion to create music is wild and free, the way it should be.

Shaun ~ I will always be inspired by Iron Maiden, GWAR and Pantera. As a kid these bands pulled me into the world of metal. Ozzy, Slayer and Cannibal Corpse came shortly after. Now I have listened and enjoyed so many bands I could write a whole article on them alone!  I love all types of music and do not limit my listening to just metal. I am inspired by music that captures an emotion familiar to my soul. We all have a story to tell.

Shaun ~ I am very interested in writing short stories and poetry. I love history and so does the rest of the band. We enjoy visiting historical places and sites. Science and the universe is of great interest to us. We also have an affinity for craft micro brewed beer, lager, ales, stouts, scotch, whiskey and many other fine spirits.

Shaun ~ I would like to thank you very much for taking the time to interview us! We appreciate your support! Be on the lookout for many new developments and announcements coming soon regarding tours and festival appearances! We want to see you all come out and help us Devastate your town! Thank you so much! Horns High! \m/ \m/ 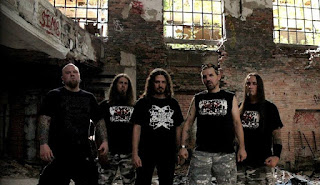 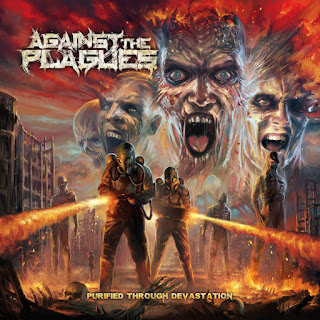 A  very  fast,  brutal  and  technical  death  metal  sound  starts  off  the  album  along  with  some  growling  vocals  and  blast  beats  and  you  can  also  hear  atmospheric  sounds  in  the  background  at  times  and  after  awhile  melodies  make  their  presence  known  on  the  recording  along  with  all  of  the  musical  instruments  having  a  very  powerful  sound  to  them.

Against  The  Plagues  plays  a  musical  style  that  mixes  brutal  death  metal  with  symphonic  and  melodic  black  metal  to  create  a  style  of  their  own,  the  production  sounds very  professional  while  the  lyrics  cover  Inner  Strength  and  War  Themes.

Posted by OccultBlackMetal at 11:13 PM No comments: