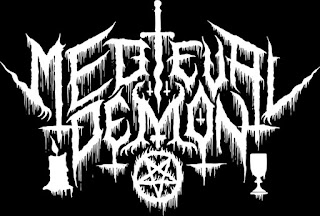 1.      Can you give us an update on what has been going on with the band since the recording of the new album?
- We are walking in the shadows,  into the caves and deep into the forests, in the same ritualistic ways that we did 20 years ago.
We worship the goat of lust that attacks the heavens with its horns!!!

2. In June you have a new album coming out, how would you describe the musical sound that is presented on the recording and also how does it differ from the stuff you released in the past?
- Our sound is to use and hit the darkest notes, under the fullmoon and  the light of the black candles, to lie together along the circle of the pentagram, in order to communicate with the spirits of the underworld and worship Satan. Medieval Necromancy is more obscure and occult from the stuff we released in the past.

3. You refer to your music as 'spiritual necromantic black metal', can you tell us a little bit more about this term?
- We create  Black metal with divination from the dead.

4. Your lyrics go in depth with necromancy, black magick and Satanism, can you tell us a little bit more about your dedication to the dark arts?
- As individuals we are against Christianity and for decades we are dedicated ourselves to darkness and the black arts.

5. The band was broken up for 15 years, what was the cause of split and also the decision to reform?
- We wanted to isolate our souls and study the necromantic texts of the late Middle Ages, the medieval magic and occult practise. Now as a promethean fire we want to keep the black metal flames of Lucifer alive!

6. I remember reading a story in the mid 90's about one of the band members facing prison time, can you tell us a little bit more about what actually happened?
- Two members were suspected as vandals and stayed in prison for a few days as they had already a history of such acts in the past.

7. What is the meaning and inspiration behind the name 'Medieval Demon'?
- The name of the band came after the invocation of a demon.

8. Can you tell us a little bit more about the artwork that is presented on the new album cover?
- It's a necromantic ritual in action. The great artist Mark Ridick made all our artwork. He is a true unholy brother.

9. What are some of the best shows that the band has played over the years and also how would you describe your stage performance?
- We have performed 2 shows during the 90s. Our performance was old school and devoted to the black metal cult spirit.

10. Do you have any touring or show plans once the new album is released?
- No. Exception would be only a night forest ceremony for  mystics and true Devil worshippers.

11. A couple of the band members also own a record store and a metal label, can you tell us a little bit more about it?
- Yes, brothers Lord Apollyon & Sirokous are the owners of Bowel of Noise records located in the centre of Athens, Greece. It's focused on extreme and satanic metal music. Sirokous also runs LVX INFERNVM  label &  Lord Apollyon ALTAR OF THE BLACK RAM.

12. On a worldwide level how has the feedback been to your music by fans of black metal?
- We buried the band but the interest from the fans is still alive.

13. Where do you see the band heading into musically during future?
- We create only true black metal. No experimentations in our rituals!

15. Before we wrap up this interview, do you have any final words or thoughts?
- Oh Satan, Spirit of the Earth, God of Liberty, open wide the gates of Hell
And come forth from the abyss...

Posted by OccultBlackMetal at 3:52 PM No comments: 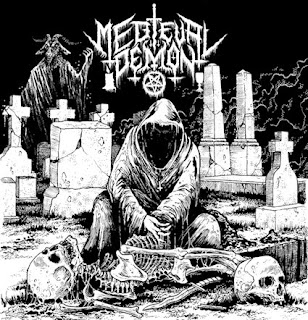 Operatic  choirs  start  off  the  album  along  with  some  acoustic  guitars  a  few  seconds  later  before  introducing  melodic  guitar  leads  onto  the  recording  which  also  takes  the  music  into  a  heavier  direction  while  also  introducing  grim  black  metal  screams  into  the  songs  and  most  of the  tracks are  very  long  and  epic  in  length.

Posted by OccultBlackMetal at 4:16 PM No comments: