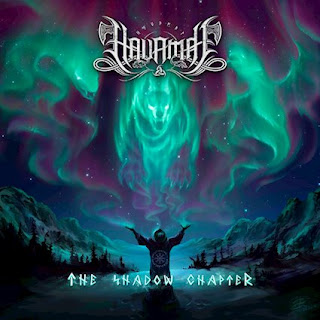 Posted by OccultBlackMetal at 9:26 PM No comments: 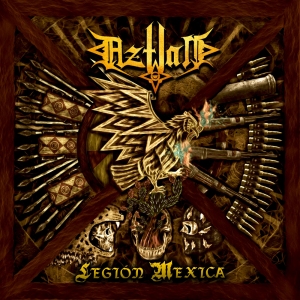 Posted by OccultBlackMetal at 8:17 PM No comments: 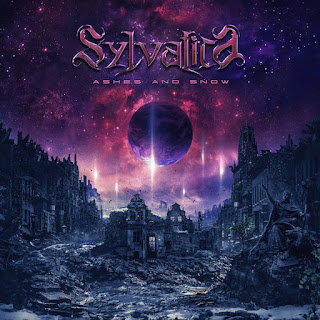 Tragic  sounding  keyboards  start  off  the  album  along  with  some  stringed  instruments  and  symphonic  elements  a  few  seconds  later  which  also  mixes  in  with  the  heavier  sections  of  the  songs.  When  guitar  solos  and  leads  are  utilized  they  are  also  done  in  a  very  melodic  style  and  a  decent  amount  of  blast  beats  are  also  added  into  the  faster  sections  of  the  songs.

Clean  pagan  vocals  are  also  added  into  some  parts  of  the  recording  along  with  the  songs  also  adding  in  a  decent  mixture  of  slow,  mid  paced  and  fast  parts  as  well  as  a  later  track  also  adding  in  a  small  amount  of  clean  playing.  The  production  sounds  very  professional  while  the  lyrics  cover  misanthropy,  science,  mythology,  cosmology  and  apocalyptic  themes. 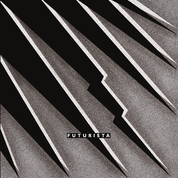 A  very  dark  and  electronic  oriented  sound  starts  off  the  album  while  also  introducing  post  punk  style  synths  into  the  music  a  few  seconds  later.  The  clean  vocals  also  show  an  influence  of  goth  rock  along  with  the  music  also  getting  very  experimental  and  avant  garde  sounding  at  times  and  all  of  the  drum  beats  are  also  programmed.

On  this  recording  Wedrowcy-Tulacze-Zbiegi   avoids  the  use  of  any  metal  influences  that  where  a  huge  part  of  previous  releases  and  goes  for  more  of  a  mixture  of  experimental  and  post  rock.  The  production  sounds  very  professional  while  the  lyrics  cover  futuristic  themes.

Posted by OccultBlackMetal at 7:32 PM No comments: 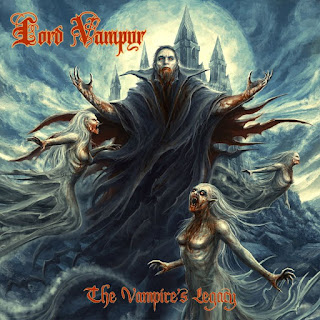 When  guitar  solos  and  leads  are  utilized  they  are  also  done  in  a  very  melodic  style  along  with  the  music  also  having  its  symphonic  moments.  Tremolo  picking  is  also  added  into  some  of  the  faster  riffing  as  well  as  one  track  also  introducing  back  up  shouts  onto  the  album,  as  the  recording  progresses  a  brief  use  of  clean  playing  can  also  be  heard.  The  production  sounds  very  professional  while  the  lyrics  cover  Vampirism,  Occultism,  Satanism,  Blood,  Tales,  Legends  and  Religion  themes.

Posted by OccultBlackMetal at 7:31 PM No comments: 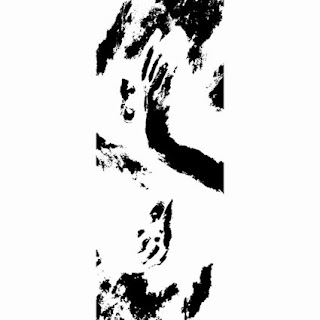 Harsh  noises  and  power  electronics  start  off  the  ep  along  with  some  programmed  beats  a  few  seconds  later  that  also  add  in  touches  of  industrial.  Vocals  are  mostly  high  pitched  black  metal  screams  which  also  get  deep  yet  aggressive  in  some  parts  of  the  recording  while  experimental  style  soundscapes  are  also  added  into  the  background  at  times.

Posted by OccultBlackMetal at 7:34 PM No comments: 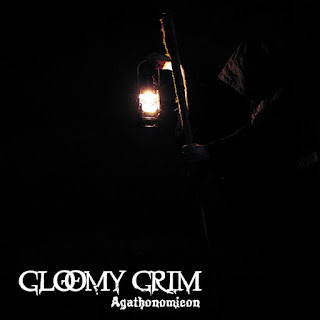 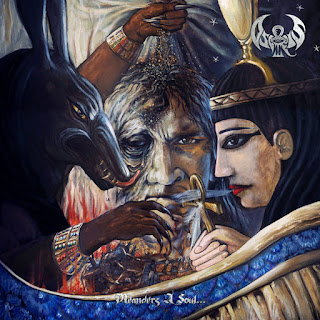 Symphonic  sounds  and  orchestration  starts  off  the  album  along  with  a  brief  use  of  nature  sounds  and  cries  while  also  mixing  in  with  the  heavier  sections  of  the  songs  at  times.  Vocals  are  mostly  high  pitched  black  metal  screams  as  well  as  adding  some  death  metal  growls  into  some  parts  of  the  recording.

Posted by OccultBlackMetal at 4:14 PM No comments:

1.For those that have never heard of you before, can you tell us a little bit more about yourself and your solo project?

1. I can’t think of much to say about myself. Despite the fact I’ve released my music under my name I don’t want it to be too much about me. My project is an attempt to represent my music as purely as possible and hopefully with as little of my “own intent” as possible.

2.Recently you have released an album, can you tell us a little bit more about the musical style that you went for on the recording?

2. I guess Lawn is best described as a highly symphonic metal album. The symphonic sections are mainly made up of strings and pianos and are influenced I think by the classical music I had heard at the time. The metal component is influenced by my initial experiences with black metal in combination with all of the other influences I had back then. The result is probably most akin to “post black metal.” The whole album has a more of a “symphonic” approach than metal though I think.

3. All of the music was finished by around March of 2018 and the majority was written in 2017. The wait was unintentional. It’s just been a long battle to present the music in the best way possible.

The vocals where a massive hurdle for me. Not only in figuring out how to approach them for this particular album but also in writing lyrics which I’ve always found difficult to do at the standard that I’m aiming for. I ended up giving up on doing the lyrics alone and asked a close friend to help me finish them. I also concluded that having the vocals be subtle was the best option. I was careful to only feature vocals in places where the music demands them instead of taking a more conventional approach. I didn’t want to cover up musical moments that spoke for themselves with vocals that would’ve worsened them.

There were also issues with the structures of some songs which had to be ironed out. A good chunk of music was scrapped for the song Lustre and an entire song was also thrown away semi-late into the process.

4.What are some of the lyrical topics and subjects you have explored with the music so far?

4. The lyrics on this album go into a lot of school experiences from early childhood all the way up to the end of high school (When the album was written). But of course it’d be way too hard to take this style of music seriously if I was singing some dramatic, teenage, school bullshit. So as a result of that the lyrics are shrouded in layers of metaphor that can be interpreted in multiple ways but extract the emotional substance out of my young years in a (hopefully) more timeless manner. The goal was to take the universal emotion out of the real life context.

5. I had the idea for a painting of a garden like that for a long time. Then I found the work of XenArtRB who had already done similar things to what I had imagined and his style struck me as perfect for the album art. So I sent him a message and after some discussion he painted the artwork for me by commission. The imagery comes from what I “see” when I listen to the music and the lyrics also use the same imagery. I think the painting turned out perfectly.

6.With this project you record everything by yourself, are you open to working with other musicians or do you prefer to work solo?

6. The music that I release under my own name is that which I write alone and for solely personal reasons in an involuntary and subconscious process. The lack of other musicians on Lawn came about initially out of necessity but later because it just “felt right” for this album. That being said I’m already trying to find a drummer to record on the next album which is also largely made up of old material that I’m finishing at the moment.

I’d love to do some more collaborative work in the future under a different banner and I also have a big interest in producing. There is also an album that’s been in the works for many years with a friend (the same who helped me do lyrics on Lawn) who has a similar musical mindset.

7. I’d like to make a distribution deal with a label for printing physical media but I have no interest if its at the cost of sacrificing the rights to my own music. I’ll print CDs and records independently if I don’t get approached.

8.On a worldwide level how has the reaction been to your music by fans of symphonic and post black metal?

8. It hasn’t had a whole lot of exposure yet but what little response its gotten has been incredibly kind and passionate for the most part. The “symphonic black metal promotion” youtube channel uploaded a track which has been the biggest source of attention so far with a lot of kind words in the comments which was amazing to see.

9.Where do you see yourself heading into as a musician during the future?

9. My goal is just to release the music that captures my emotional state over a given period of time. Albums are “units of time” in my eyes. The future second album (which again: features a lot of old material) is already quite different aesthetically and stylistically from Lawn (While retaining some of the same features) and I’m sure I’ll venture even further later on down the line. The only thing I have a concrete interest in doing in the future is becoming good at orchestral writing. I’ve started learning so that eventually I can hopefully do an album like Lawn on a much larger scale with real and interesting orchestration.

10. I’m always searching for new music but my “musical mood” can swing very quickly so I listen to quite a broad range of things nowadays. I love classical music; my favourite composer is Beethoven but I’m also largely into Mahler, Sibelius and Shostakovich amongst many others of course…too many to name. I have a wide appreciation for black metal too, I’ve been listening to the first Enslaved demos and albums recently. Again there’s just too many to name with black metal but I tend to always go back to the Norwegian classics. I’ve also been on a big Celtic Frost and Bjork kick lately. Some other favourites are Devin Townsend, Ween, Paysage d’Hiver and Lunar Aurora.

11. I have a large appreciation for visual art though I’m not overly well versed. I’m also fairly philosophically and to use a horrible word: “spiritual” in some sense. I think a lot of philosophy and spirituality is bullshit though. I also love video games but mainly from the 2000s…most modern gaming doesn’t interest me at all. I think archaic 3d graphics have a similar atmospheric effect to raw production in black metal, funnily enough…the same principle perhaps.

12. Thank you for reaching out for an interview and thank you to anybody reading this and/or who goes and listens to my music :)

Posted by OccultBlackMetal at 9:49 PM No comments: