J.: We had been busy with the post production and stuff to finally finish the record. It taught us a great lesson in patience. ;-) In the meantime we played a couple of shows including a small tour with our brethren Vidargängr and Light Of The Morning Star in fall 2018.

2.You have a new album coming out in September, musically how does it differ from the material you have released in the past?

J.: I think we got darker and more obscure in every aspect and became a better band both in songwriting and musicianship. Also the production is fitting our vision much better. Our producer Michael Zech did a great job and helped us a lot to develop this sound.

3.What are some of the lyrical topics and subjects the band explores with the newer music and also how would you describe your progress as songwriters over the years?

F: Basically I use really sad personal issues from a distance. I sum up my lessons from these issues in a certain way and try to write with a certain "strength of knowledge".

Furthermore my night-time walks inspire some of my lyrics. At least I use one of those for each release.

4.What is the meaning and inspiration behind the name 'Morast'?

J.: We were searching for a fitting name in the beginning like every other band does and got stuck with that one. A german word which can be translated into "morass" or "mud". That's it.

5.Can you tell us a little bit more about the artwork that is presented on the new album?

F: The artwork describes the uncertainty and emptiness that life itself can bring.

The longer the path of life is, the more tired you can get and the colder you can feel.

Over the years you lose family members, friendships break up because of quarrels or simply because of the daily routine and you feel more lonely step by step and alone along the journey into the unknown. The title track deals with this topic and the implementation

of the draughtsman "View from the Coffin" has hit this situation perfectly.

We all run into the unknown for the most part and the two rock faces symbolise the blockade of visions of the future. There is a gap, but you have to cross it on your own to see the future.

I would describe us as bitter, angry and uncontrolled band on stage.

F.: At the moment four more shows are confirmed this year and in spring 2020 we plan to book a tour.

8.On a worldwide level how has the reaction been to your music by fans of black, sludge, doom and death metal?

J.: We already had the possibility to play a couple of shows outside of Germany including festivals in Lithuania or Denmark for example. Nonetheless we are a small band but in these times of worldwide internet propaganda it's not really difficult to reach people out there who are interested in your band.

9.What is going on with some of the other bands or musical projects thee days that some of the band members are a part of?

J.: R. still plays in his long running HC/Punk band, L. is quite busy with his other band, F. has a Black/Thrash project that will release their first record soon and I just started a little BM thing with some friends.

F.: Become even darker and more oppressive than now.

J.: My biggest influences are classic bands like Neurosis, Black Sabbath, Winter, Bathory, Celtic Frost/Triptykon, Godflesh to name a few. Bands that created their own unique sound and identity. Sadly it's something very rare nowadays. On the other hand I have to say there are still contamporary bands that I like or discover. I really enjoy the development of the "scene" here in Germany, too. Check out older and newer bands like Vidargängr, Secrets Of The Moon, Antlers, Chapel Of Disease, Ultha, Antlers, Dolch, Essenz, I I, Ketzer, Evil Warriors, Sulphur Aeon, The Ruins Of Beverast (in case you don't know them yet).

I also dig good radio friendly music when I'm driving my car. Lots of other shit as well from Delta Blues to Goth to Punk etc.

F.: I swim a lot and like watching movies.

F.: Thank you for the interesting interview! 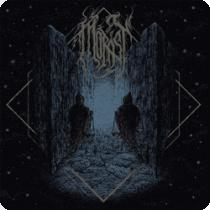 Morast  plays  a  musical  style  that  takes  black,  sludge,  doom  and  death  metal  and  mixes  them  together  to  create  a  sound  of  their  own.  The  production  sounds  very  professional  while  the  lyrics  cover  disenchantment  themes.

https://www.facebook.com/morastofficial
Posted by OccultBlackMetal at 12:29 AM No comments: