It’s a good piece of metal I think, with a lot of influences. In our music you can hear  elements of death, black, heavy and power metal, but we don’t want to put ourselves in any of these boxes. It isn’t very important for us. Psychophobia is just a metal band.

Generally, lyrics are about human condition in the world and his place in the universe. Sometimes the topic is about catastrophic visions of the future and uncertainty what tomorrow brings us in the age of dehumanization.

4.The band has been around since 2002 but so far has only released 2 demo's, a full length and the current ep, can you tell us a little bit more about the gap in between releases?

In those years there was a lot of squad changes. Each of us grew up and started adult life. You know: end of the school, going to college, going to work, try to start a family. The music was on the second place sometimes but we’ve had always stay together.

5.What is the meaning and inspiration behind the name 'Psychophobia'?

We was very proud of sharing the stage with Christ Agony and Frontside – big names of polish rock/metal scene, but sometimes the best show is when you’re playing a small gig with bands you are befriended. In our case that will be R.O.D. and Shame Yourself.

8.On a worldwide level how has the feedback been to your music by fans of melodic and extreme metal?

We are already waiting for feedback.

9.What is going on with some of the other bands or musical projects these days that some of the band members are a part of?

Most of these projects are suspended. Only Patologia is still playing. It’s a well known polish punk rock brigade.

10.When can we expect a full length album and also where do you see the band heading into musically during the future?

We want to start recording our fresh stuff in the beginning of the next year.

It’s really hard to say. There are many bands we’re listening in many kinds of music. Our biggest influences are Black Sabbath, In Flames, Children of Bodom.

Typical: football, motorcycles, girls and drugs and alcohol of course.

For all brothers and sisters: STAY HEAVY!

Posted by OccultBlackMetal at 1:33 AM No comments: 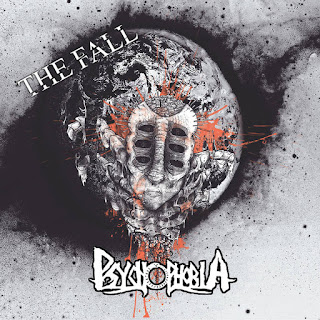 Classical  guitar  playing  starts  off  the  ep  and  a  few  seconds  alter  the  music  starts  going into  more  of  a  heavy  and  melodic  musical  direction  along  with  some  blast  beats  and  black  metal  screams  while  the  solos  and  leads  are  very  heavily  rooted  in  melodic  death  metal  and  all  of  the  musical  instruments  have  a  very  powerful  sound  to  them.

Psychophobia  plays  a  very  heavy  and  melodic  musical  style  that  mixes  death  and  black  metal  together  as  well  as  having  a  good  mixture  of  both  modern  and  old  school  influences, the  production  sounds  very  professional  while  the  lyrics  cover  Anti  Priest  and  Humanity  themes.

Posted by OccultBlackMetal at 10:15 PM No comments: