1. For those that have never heard of you before, can you tell us a little bit about the band?
We are Finnish black metal band with some melodic influences. We have both, female and male vocals and our lyrics are written in Finnish. We bring strongly influences of the nature, darkness and mythology to you.

2. You have a new album coming out and you also put out 2 ep's last year,

how would you describe the musical sound that is present on all 3 recordings and also how do they differ from each other?
The difference between those three recordings is mainly in our musical growth. In the first ep band searched its form and we had more folk influences then. In the second ep, we had strong symphonic influences.  And in our newest album we are more pure black metal than we are in the other albums, but we still have strong melodies.

3. You write your song lyrics in Finnish 'kalevalametre' what was the decision behind using this ancient language?
Our vocalist Fornjotur has worked with kalevalametre for many years.  It felt natural to bring our own culture with. The common factor from the beginning has been lyrics in kalevalametre and lyrical themes.

4. Your lyrics also cover Finnish-Baltic Paganism and Anti Christian themes, can you tell us a little bit more about your interest in these topics?
These topics are about us, these are the values that we stand for. Inside the band we have strong beliefs of Finnish-Baltic mythology, and anti-Christianity.
5. What is the meaning and inspiration behind the name 'Hiidenhauta'?
It has several meanings. “Hiisi” means an ancient sacred place and also the dark spirits of nature and “hauta” means a grave. So Hiidenhauta means pre-Christian growth to us and that all the ancient habits have not been forgotten.


6.What are some of the best shows that the band has played over the years and also how would you describe your stage performance?
We don’t do gigs yet. We have been concentrating on making songs. We are not very excited about bringing us to the excessive people. We are quite misanthropic.

7. Do you have any touring or show plans for the new release?
We have been asked to, and we have plans. But we are not sure about anything.
8. On a worldwide level how has the feedback been to your music by fans of black metal?
It has been as positive feedback as on black metal can be! For our surprise, we have received positive feedback from places we didn’t even know.

9. Are any of the band members involved with any other musical projects these days?
Our vocalist Fornjotur writes lyrics for Korpiklaani and Jonne Järvelä’s solo project.And some of us have smaller projects, but not anything bigger.
10. Where do you see this band heading into music wise during the future?
We have always done our music the ways we want to. I hope that in the future we still do it like that. I would like to see that we have more supporters all around the world and notice that our musical atmosphere would reach more people.
11. What are some bands or musical styles that have had an influence on your music and also what are you listening to nowadays?
Inside the whole band, the scale is very large. 90’s black metal is a very big influence, but there’s also classical and folk music. But we like silence more.

12. What are some of your interests outside of music?
We are into history, nature, nationalism, anti-Christianity, Finnish war history and so much more! Our music is about these things what we are outside of music. They walk hand in hand.

13. Before we wrap up this interview, do you have any final words or thoughts?
“Grove rips off my light, may the wolf increase within.”
Fornjotur & Riena

Posted by OccultBlackMetal at 6:01 PM No comments: 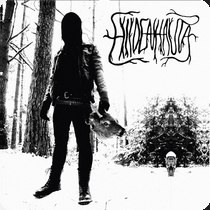 Song  lyrics  are  written  in  Finnish  and  cover  Finnish-Baltic  mythology  and  anti  christian  themes,  while  the  production  has  a  very  strong,  powerful,  heavy  and  professional  sound  where  you  can  hear  all  of  the  musical  instruments  that  are  present  on  this  recording  as  well  as  some  of  the  songs  being  very  long  and  epic  in  length.

Posted by OccultBlackMetal at 12:30 AM No comments: