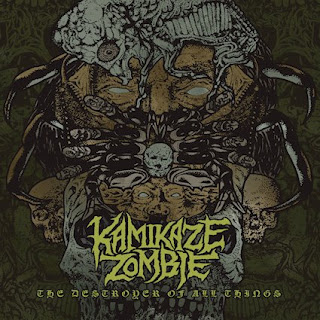 Horror  movie  samples  start  off  the  album  before  going  into  more  of  a  heavier  musical  direction which  mixes  the  raw  energy  with  the  heaviness  of  thrash  metal.  A  decent  amount  of  melody  can  be  heard  in  the  guitar  riffing  while  the  vocals  bringing  in  a  great  mixture  of  aggressive  screams  and  shouts.

Elements  of  sludge  and  doom  metal  can  be  heard  in t he  slower  sections  of  the  music  along  with  some  death  metal  growls  also  being  utilized  at  times  as  well  as  horror  movie  samples  being  added  onto  the  other  tracks and  all  of  the  musical  instruments  have  a  very  powerful  sound  to  them  and  all  of  the  music  sticks  to  a  heavier  direction.  The  production  sounds  very  professional  for  being  a  self  released  recording  while  the  lyrics  cover  horror  movie  themes.

https://www.youtube.com/watch?v=E5G2GxgxxKI
Posted by OccultBlackMetal at 2:49 PM No comments: 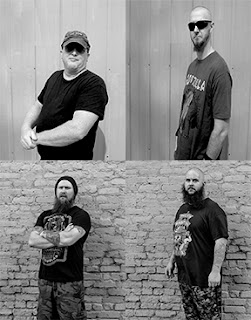 1.For those that have never heard of you before, can you tell us a little bit about the band?  Sure, The band started in 2014 With myself (Clint) And Damon, who at the time was the drummer. we just wanted to do something that was different than most of the shit around us at the time. We both grew up with 80's thrash/punk/hardcore and the metal bands of the 90's and we just wanted to make music we wanted to hear. lol

2.In 2017 you had released your first album, how would you describe the musical sound that is presented on the recording? A Car wreck - just a nasty, heavy sound. I like music to be kind of like a tornado, you don't really know where we are going, you just gotta ride it out.

3.On the album you had a variety of many different metal styles ranging from 80's to modern era, which era of metal do you prefer to the most?  The album was based off of 80's punk/ hardcore and 90's era melvins and metal bands like, White Zombie,Slayer, Crowbar, Pantera, Sepultura Ect. and of course our gigantic love for the New Orleans music scene. Necorphagia was also a big influence. Rest in power - killjoy.

4.Your lyrics cover a lot of horror movie themes, can you tell us a little bit more about the horror films you had explored on the new album?  yeah, so I love movies as you can tell. A lot of our song titles are movie titles. lyrics I use metaphors most of the song are about real life shit, with horror movies and other sifi themes to express the real life emotions in the songs. The song "The Stone Giant"  I used the movie: "Daimajin"  its a japanese horror film from the 60's to its about, a Giant stone statue that guards the gates of hell comes to life to protect japan. I also, used my favorite book "Moby Dick" on this one. Other songs, I use werewolves, Satan, though with Satan- its never about him, just Satan is the great antagonist. 1226 and Death Rides A horse. both are real life monsters. 1226 is about the Chinese Cultural Revolution, that shit is worse than horror movie you could imagine. Death Rides A Horse ( one of my favorite western) is about the Mason Murders. "Manhunter" and "The Story Of Jane Doe" are Mirror's of each other.  Silence of the lamb and ManHunter are the movies I pull from.

5.What is the meaning and inspiration behind the name 'Kamikaze Zombie'? It means nothing. That was the point. I wanted a name that was just Weird but cool. Something we could make whatever. KZ was it!! the idea of a Zombie being a kamikaze was absurd to me, I couldn't stop laughing. We originally were going to be "The Crude Mutants" so we kept it to describe or fans and ourselves. So now we are Kamikaze zombie - "the Crude Mutants"  but with Kamikaze Zombie- I really make a conscience effort not to have anything to Kamikaze Japan, I try to steer clear of all of that,shit. lol

6.What are some of the best shows that the band has played so far and also how would you describe your stage performance? Ok, Best shows? Last year at Full Terror Assault 3 was pretty fucking rad!!  We have been lucky enough to play with a lot of the bands we look up too, which RULES. But some of small local shows that just come together can be some of the best.  Stage performance - We are in the works to scale up the stage stuff. we want movies and crazy shit going on the background. We also try to have samples from the albums live. I hate to hear a album then live it's completely different. but, also with us. Steve and Myself,especially. we like the show to be fun and light hearted. I get tired of seeing night after night of dudes coming out beating their chest and all. So we just come out telling jokes and cutting up. keeping it fun. We let the music speak for itself.

7.Do you have any touring or show plans for the future? YES!! we have two tours booked this summer with our friends in HailShot. We are going Cost to Cost. We start in denver, Co and end in Savannah, GA . other than that. We play with Eye Hate God in a few days. We have a couple of festivals we are in the works to play. which will takes us through the rest of the summer. Then come September we hit the road again. Gonna go North after that tour. We come home and start work for our next Album. We start recording back at LedBelly December 2018 and that is our plan for this year.

8.Currently you are unsigned, are you looking for a label or have received any interest? YES!! We are definitely looking. We are in talks with a smaller but very cool label now. but We gotta keep it under the hat for now. One of our major goals is HouseCore Records. that would be a dream come true.But we will see where the road takes us.

9.On a worldwide level how has the feedback been to your music by fans of extreme metal?  Actually and quite honestly -surprisingly we have been getting a lot of great feedback from Europe!!! which rules. So I've been trying to push that interest. Who knows? we may get froggie enough to jump across the pound in the next year or so...We will see.

10.What is going on with the other bands or musical projects these days that the drummer is a part of?  Lol I don't really keep up with them. to be honest. I just focus all my time on KZ. everything else, is none of my business.

11.Where do you see the band heading into musically during the future?  We have 8- or 9 songs in the works now, for the new album. I can tell you. They are more trashy than this album. but they are also, heavier and lean on grindcore stuff .. but its still very much KZ. We haven't deviate that much from Night Of The Nuberus". But, we will let you guys decide.

12.What are some of the bands or musical styles that have had an influence on your music and also what are you listening to nowadays?
Black Flag, Minor Threat, The Bad Brains, Celtic Frost, CrowBar, SuperJoint, Slayer, White Zombie, Pantera,The Melvins, Gwar, Goatwhore, Acid Bath, Suicidal Tendencies, Metallica, The Misfits and about a million others have all influenced us.  Currently There are two bands that I love to death. the Band Child Bite. which I am lucky to call my friends. The have some amazing tunes. I jam their stuff on the daily, A fun fact - Shawn knight of Child Bite, did our album cover. Dude is a super talented dude. The other band I cant seem to get enough of is Us Bastard. I'll jam their album for like a week straight. Just really good shit!! My buds in Against the grain and Hailshot also have great tunes out right now, that are worth checking out.

13.What are some of your non musical interests?  None music.I teach 8 step preying mantis kung fu, I love drawing and then of course horror movies, comic books.I screen print all of our KZ's shirts and Im a massage therapist for my day job.

14.Before we wrap up this interview, do you have any final words or thoughts? Yeah, thank you for you time. thanks to all our Crude mutants for their support and check us out at www.kamikazezombie.com - See you on the road.

Posted by OccultBlackMetal at 8:51 PM No comments: 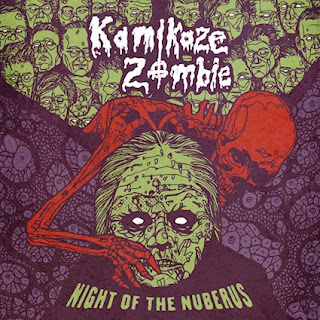 Kamikaze  Zombie  plays  a  musical  style  that  takes  black,  death,  sludge,  thrash  metal,  hardcore  punk  and  crossover  and  mixes  them  together  to  create  a  sound  of  their  own,  the  production  sounds  very  professional  for  being  a  self  released  recording  while  the  lyrics  cover  horror  and  slasher  movie  themes.

kamikazezombie.bandcamp.com/album/night-of-the-nuberus
Posted by OccultBlackMetal at 5:24 PM No comments: