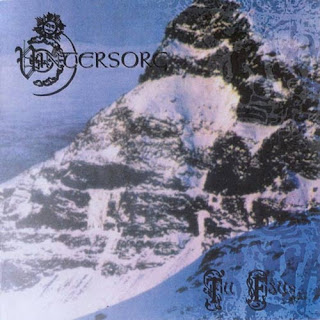 Vintersorg are a pagan/folk/black metal band from Sweden and this is a review of their 1999 album "Till Fjalls" which was released by Napalm Records.

Drums mix slow, mid paced, and fast beats together while the keyboards and synths give the music an atmospheric feel, as for the bass playing it has a lot of melody in the riffs mixed with a dark distorted tone.

Rhythm guitars mix a lot of mid paced melodic riffs that are very pagan sounding that also has some classic metal influences with a little bit of fast black metal riffing, while the lead guitars are melodic guitar solos that are influenced by classic metal with some occasional use of a wah wah pedal, as for the acoustic guitars they use a lot of finger picking and open chords which gives the music an atmospheric folk music feel.

Vocals are a mixture of high pitched black metal screams mixed with a lot of clean singing viking vocals with some female vocals being used on occasion, while the lyrics which are written in Swedish seem to be about Norse Mythology, as for the production on this album which was recorded during August of 1998 at Ballerina Audio with the drums and synthesizers being recorded during July of the same year at Wolf's Liar has a very professional sound and you can hear all of the musical instruments.

In my opinion Vintersorg are a very talented folk/black metal band and if you are a fan of this style you probably have already heard this band.
RECOMMENDED TRACKS INCLUDE "For Kung Och Fosterland" "Till Fjalls" "Jokeln"
and "Isjungfrum". RECOMMENDED BUY.

Posted by OccultBlackMetal at 8:45 PM No comments: