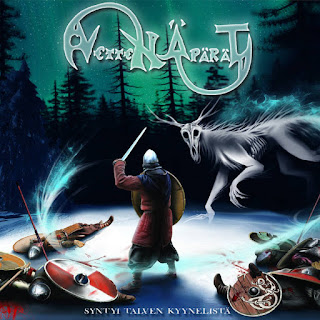 Spoken  word  parts start  off  the  album  along  with  some  acoustic  guitars  and  synths  a  feel  seconds  later  that  also  takes  the  recording  more  more  of  a  folk  music  direction  while  the  chants  give  the  songs  more  of  a  fantasy  movie  feeling  which  also  leads  up  to  a  heavier musical  direction which  they  mix  in  with  the  folk  elements.

Vetten  Aparat  plays  a  style  of  pagan/folk  metal  on  this  recording  that  is  very  epic  and  melodic  while  also  mixing  in  the  heaviness  of  black  and  death  metal,  the  production  sounds  very  professional  while  the  lyrics  have  a  concept  that  deal  with  fantasy  themes.

We're preparing for recording an album and our upcoming gigs this summer and fall.

We work in the general framework of folk metal but don't limit ourselves to just one end of the genre. Sydäntalven Viha as long song is a good reflection of our music as a whole with it's combination of low and distorted guitars, heavy drumming and our traditional folk melodies.

3.The band has been around since 2006 but waited until 2011 to release any material, can you tell us a little bit more about the first 5 years?

Back in the year 2006 we were still just kids. We started everything from scratch. While playing some Ensiferum covers in our school's band room the line up changed many times. We needed to buy all instruments and amps by ourselves and that took time because getting money that young wasn't that easy.

Also it took a long time to find people on the same wavelength. The current line up stabilized just one year ago and we're now finally ready to start making more process. We had a rocky start but the whole time our main concept has had time form and it's always been worth the effort and the wait. With all this time and the current line up our vision is more clearer than ever. Just wait for the album.

4.The band considers themselves part of the second generation of Finnish folk metal, how does the newer generation differ from the older bands?

We can only speak for ourselves on this one since every band has their own approach on the music. In our mid and late teen years we were influenced by the big five from our country. During "the golden years" of the first wave of folk metal in Finland (2005-2009) these band toured heavily here and we were all in the audience every show.

Now we're trying to bring in some theatrical elements to our live shows for giving an unique experience driving the genre forward. We believe the show needs more visual elements not just great music. For example creating a whole atmosphere of a cold dark winter forest on stage with trees and props or using the smell of tar to convey an otherworldly essence of nature.

5.What are some of the lyrical topics and subjects the band explores with the music?

They range from our version of the classic themes of describing the harsh but beautiful northern nature to expressing personal feelings in a lore form of battles and old tales. Sami processes a whole variety of strong emotions from his life through his lyrics.

Sydäntalven Viha or Winterheart's Wrath is about the destructive spirit of the north that demolishes an invading army
The chorus also conveys the desperation in a place where no one can hear you cry in rage.

6.What is the meaning and inspiration behind the name 'Vetten Aparat'?

Vetten Äpärät is kinda old finnish. Straight translation is "Bastards of Waters". Word "Vetten" means "Waters'" but can be used as "Lakes". "Äpärät" word means "bastards". The idea of the name is that back in old days in Finland, kids born outside of christian marriage were not blessed. So we use that word instead of for example the word "pagan". Another idea is when people went to explore the wild north they encountered "natives" and called them "Bastards of the North of Thousands of Lakes". And later shortened as "Bastards of Waters" - Vetten Äpärät.

We could say we had three shows which stand out from the others. First was in Nosturi which is the one of the biggest concert places in Helsinki. It was during one band competition. Even though it was not a whole set, just playing on that big of a stage felt good.

The second was at Semifinal where we first tried out decorating the whole stage to look like winter in Finland. We had some poetry and some acting on stage. Not the average "that song was... We are Vetten Äpärät. The next song is... Are you guys ready to rock" type of boring bullshit.

The third was at Club PRKL. We were warming up for Kivimetsän Druidi and the place packed during our set. People were actually there to watch folk metal instead of just drinking in a bar with live music. Getting actual reactions from the crowd felt extremely positive.

We have already booked some shows for the next summer. After the album comes out next fall we are going to have the release gig/tour.

9.On a worldwide level how has the feedback been to your music by fans of folk metal?

Generally it has been always positive. We've gotten lot fans from Central and South America. There is a surprising amount of love for all folk metal there. It's harder to gain attention in Europe and especially in Finland because there is so many other band pushing their music and trying to be the next big thing metal no matter the genre.

10.When can we expect a new album and also where do you see the band heading into musically during the future?

New album will be released sometime next fall. In the future the music will be more and more close to ancient times but also people's daily life. We'll be figuring out more and more ways to sound more primal and raw. Down to earth but not black metal.

Hard to tell what will influence us next but here is something from our current playlists:

Sami: More and more neopagan folk music like Wardruna, Omnia and Faun. I highly appreciate composers like Tuomas Holopainen and the new Nightwish album is worth listening.
Leo: Actually I haven't listened to that much metal lately. There is so much too average or borderline boring metal coming out just now. Last few months I've gotten in touch with Southern Gothic music and 90's harder rap acts. It's good have a diverse taste in music.
Anton: Wide range of metal, some EDM, glimpse of acoustic folk music and I also really like certain movie scores.

12.Does Paganism play any role in your music?

It's hard to say. The six of us come from varying ideologies. Sami identifies himself as a pagan and as our main songwriter he writes about paganism but does not preach it. Vetten Äpärät is more influenced by different European lores and mythologies than just paganism.

Fitness and fatness. Some of us come from the same group of friends so social gatherings with alcohol included is our thing from time to time. Also Skyrim and gaming in general.

Buy our album and come see us live. Get ready to surf on the second wave!
Have a cheerful and beerful spring people!

Posted by OccultBlackMetal at 2:43 AM No comments: 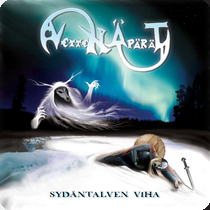