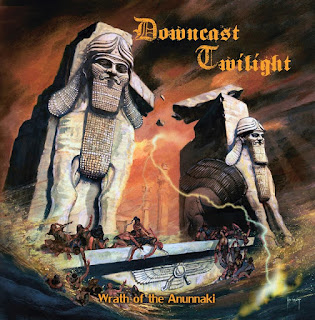 Middle  eastern  style  instruments  start  off  the  album  and  also  mix  into  the  heavier  sections  of  the  music  along  with  a  good  amount  of  orchestra  and  symphonic  elements.  A  great  amount  of  melody  can  also  be  heard  in  the  guitar  riffing  while  the  vocals  are  mostly  death  metal  growls.

https://www.facebook.com/downcasttwilight/
Posted by OccultBlackMetal at 7:23 PM No comments:

1.For those that have never heard of you before, can you tell us a bit about band?
First off, greetings! It’s a sincere pleasure to talk to you and to your readers. We really appreciate it! “Downcast Twilight” were formed in late 2015 as a folk / Viking death / black metal project by OG, who is the musical mastermind behind every composition and also handles the rhythm guitars section. Vitold Buznaev is on vocals, Jan Twothousandarrows Tamb is on lead guitars and solos, Chris Zindros on bass and the fretless bass solo in “The Red Queen” track, Shannon Lee Stott-Rigsbee on violin and Marios Koutsoukos tackles all the lyrics. In 2016, we signed with Stygian Crypt Records, in Russia. Very recently, our first album, “Under the wings of the Aquila”, was released in CD. Note that it is also available as an online release on CDbaby.com. It has been a privilege to also cooperate with guest musicians on said album: Hildr Valkyrie did the vocals for “The Red Queen”, Eva Oswald sang in “Death in Alexandria” and we also had additional bass recordings by Jan Banaś.

2.Recently you have released your first album, how would you describe the musical sound that is presented on the recording?
Hopefully, it’s exactly what fans of the folk / Viking metal genre would expect: heavy, pounding, melodic yet with brutal and raw overtones, ideal for headbanging and spilling your beer (or mead) all over the place. OG, the maestro extraordinaire of “Downcast Twilight” handled the mixing and mastering of the album, bringing his professional expertise and years of experience into creating a sound that is solid, full-bodied and, we believe, will satisfy even the most demanding of listeners.

3.What are some of the lyrical topics and subjects the band explores with the music?
In this particular album, “Under the wings of the Aquila”, the lyrics deal exclusively with themes from Roman antiquity: some songs are about historical events, such as the final days of Mark Anthony and Cleopatra (“Death in Alexandria”) or an abbreviated history of the exploits of the 6th legio ferrata (“The Ironclad Legion”). Other songs deal with the more religious aspects of Roman times, such as the feast of the Lupercalia (“Orgiastic Lupercalia”), which evolved into modern-day “St. Valentine’s day” or the Roman witch-hunt (“The witches of Anglesay”), which, Pliny assures us, was a thing that Romans actually did in his time and, to put it in his words, “the world owes an immeasurable debt to Rome for purging off the face of the earth the barbarous rites of human sacrifice”. Still, “Under the wings of the Aquila” is not a concept album. It has a uniform cultural theme, yes, but every song is its own separate narrative. Future “Downcast Twilight” albums will deal with totally different cultures and civilizations.

4.What is the meaning and inspiration behind the name 'Downcast Twilight'?
Well, we are aware that the band’s name sounds more appropriate for a “goth” or “doom” band than for a folk / Viking death metal band but we didn’t want to go with something that would be too cliché or conjure up any specific cultural image to mind. “Downcast Twilight” reflects, rather, that bitter-sweet melancholy feeling, that vague nostalgia one gets when mentally exploring the pages of history and legend of the human race – its glories and shames, triumphs and tragedies, follies and moments of enlightenment. If you will, it’s also an allegory for the “murky” and faded understanding that modern man has, through scattered and fragmented accounts and findings, about his actual past.

5.What are some of the best shows that the band has played so far and also how would you describe your stage performance?
In truth, we are not so much of a live-gig band as much as we are a studio project. With our members being dispersed all over the globe, getting physically together and rehearsing for a live show is currently out of the question, yet who knows what can happen in the future? Perhaps we’ll man a “touring line-up” or something. Everything is on the table and the sky’s the limit! Therefore there’s no stage performance per se to describe as of yet, but I can let you in on a little secret: I do one hell of an air guitar in my shower.

6.Do you have any touring or show plans for the future?
Alas, due to the restrictions mentioned above and the very nature of “Downcast Twilight”, such plans for the time being have to remain in the sphere of wishful thinking.

7.On a worldwide level how has the feedback been to your music by fans of folk and extreme metal?
Actually, the response of the fans has been overwhelmingly great! We are extremely pleased and, at the same time, grateful to all those people who take the time to leave a comment on our social media pages, sharing their enthusiasm with us and the rest of the world. It’s the most amazing feeling really and it always brings a smile in our faces! So, we would like to take this opportunity and shout out to all of you folks who love and support our music – “You’re the best! You rock!”. We believe that what we do has truly something new to offer to the folk / extreme metal genre and, apparently, discerning fans have picked up on it and are embracing “Downcast Twilight” with an ardor that is honestly moving.

8.What is going on with some of the other bands or musical projects these days that some of the band members are a part of?
In truth, all of our band members as well as our guest musicians are veterans of the metal scene and even have a long-standing presence in other forms of artistic expression as well. As a result, everyone is one way or another involved with numerous side projects. OG works as a professional sound engineer with a multitude of bands, both in the UK and worldwide; Jan Twothousandarrows Tamb and Hildr Valkyrie may be known to many of you from the many “Folkearth” and “Folkodia” albums in which they have participated. Vitold Buznaev is also a member of bands such as “Impakt”, “Amederia” and others while you may know of Chris Zindros from other bands he’s involved in, such as “Aenaon” and “Absinthiana”. Shannon Lee Stott-Rigsbee is a classically trained violin player and concert musician. Marios Koutsoukos, apart from his work as lyricist for metal bands like “Folkearth”, “Folkodia”, “Dimlight” and other,  is also a professional author of fiction novels, writing in both English and his native Greek.

9.Where do you see the band heading into musically during the future?
It’s difficult to say with any certainty. I mean, musical evolution is like personal growth: the more you learn, the better equipped you are, the more you change and adapt to an ideal of what is “good” and “beautiful” that is constantly coming more and more into focus. Rest assured, however, that “Downcast Twilight” will remain true to its musical “brand” and you’ll always know what to expect from us. It’ll only get better with each album. We are ever striving towards excellence and cooperation with the best musicians in the scene, so be ready for awesome surprises in the near future!

10.What are some of the bands or musical styles that have had an influence on your music and also what are you listening to nowadays?
Well, we’re obviously heavily influenced by the norms of the Viking / death / folk metal genre. Bands like Tyr, Amon Amarth, Thyrfing and Mithotyn are among our favorites yet we do not like to limit ourselves. Each member of “Downcast Twilight” has his or her own special preferences, ranging from hard rock to black metal. Our creative process is like an Athanor, an alchemical furnace, where all these individual influences are smelted together in the refined amalgam of our sound. We listen to pretty much anything nowadays – always depending on the moment and the mood: all sorts of metal genres, from power / progressive to symphonic black metal, then we might even jump to Icelandic folk music, medieval canticles, dark rock crooners, jazz and blues… seriously. Anything. If you had audio access to all our heads it would sound like an asylum for the musically deranged!

11.Does Paganism play any role in your music?
As a band, regardless of the personal beliefs of any of our members, we try to keep it as secular as possible. We are story-tellers, not preachers, after all. Of course, when dealing with themes from antiquity and mythology we do not shy away from approaching Paganism in its historical context. Depending on the theme of the song and its narrative perspective, we may deal with the beauty found in the simplicity of ancient religion or, just as well, with some of its more bizarre and gruesome practices. In order to better understand the “whys” and “hows” of any ancient culture, one must first understand, deeply and without bias, their conception of the divine. Among our members, we have Christians (of various denominations), practicing Pagans and secular thinkers as well. However, “Downcast Twilight”, as a group, does not have a religious agenda and that is why we all get along and have cartloads of fun making music together!

12.What are some of your non-musical interests?
Well, they are as varied as the personal interests of each of our members. But, at the end of the day, we’re normal guys and gals doing normal, boring stuff: underwater archeology, knitting, historical reenactment, occult research at the risk of our sanity (to say nothing of our immortal soul and the off-chance of awakening the Great Old Ones), beer brewing, ESP / super-soldier training, gardening, some rocket science in an attempt to contact the Aldebaran civilization and also cooking on the side. Because it’s the little things that keep you going and give your strength throughout the day, you know?

13.Before we wrap up this interview, do you have any final words or thoughts?
Thank you very much for your time; it has been a real pleasure talking to you and we appreciate it. To all the people out there who enjoy our music, we salute you and thank you for your support – it is you who keep “Downcast Twilight” going and make our hard work worth every minute! Stay strong, creative and keep in mind the words of the Roman poet, Propertius: “let each man pass his days in that wherein his skill is greatest”.

Posted by OccultBlackMetal at 3:49 AM No comments: 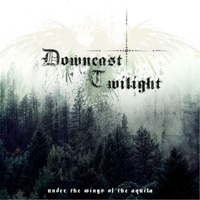 Downcast  Twilight  plays  a  musical  style  that  is  mostly  rooted  in  folk  metal  while  mixing  in the  heaviness  of  melodic  death  and  black  metal  to  create  a  sound  of  their  own,  the  production  sounds  very  professional  while  the  lyrics  cover  fantasy  and  mythological  themes.

https://www.youtube.com/watch?v=n0UErzTJcL0
Posted by OccultBlackMetal at 11:02 AM No comments: