We did several shows, a lot of promotion, Signed by ‘Via Nocturna’, we designed new merchandise like t-shirts, posters, buttons etc.

2.In April you had released a new album, how would you describe the musical sound that is presented on the recording and also how does it differ from the stuff you have released in the past?

It difficult to give an exact description but it it’s probably best described as progressive symphonic black metal with our own twist. The sound is really transparent so every single instrument has its own place into the mix. The keys give it an epic and bombastic sound but not to dominated.
Because of a big line-up change the overall sound is also complete different as our former albums.

3.This is your first album to be released in 6 years, can you tell us a little bit more about what has been going on during that time frame?

Those years where not really lost years. We developed our own sound even more, did have a big line-up change and put ourselves to the limit to create a masterpiece product. All of this has taken its time.

Our album Omertà has become a concept album. As the name already describes it has all to do with the most evil part of our society. The Mafia. Specially between 1920-1950 in America. Big names will pass the revue like Al Capone, Lucky Luciano, Vincent Mangano, Richard Kuklinski and others.
In our opinion the higher meaning of the black metal division is to overrule everything and create your own freedom.
The Mafia Families overrules everything. What is more evil than this?

5.Originally the band was known as 'Throned By Tyranny', what was the cause of the name change and also the meaning and inspiration behind the name 'Misanthropia'?

At that time we were a complete different band, our interest and line-up changed, we buried TBT and Misanthropia was born.
We were inspired by the band ‘Ancient Rites’ and their song ‘Total Misanthropia’.
Misanthropia describes our worldview. We have a very pessimistic view of society. Sometimes it seems there is only hate, war, distrust of each other and so on. It is a morbid world we’re living in.

Right now we are in contact with some agencies to arrange shows and maybe tours for in the coming year.

8.The new album was released by 'Snakebite Productions', can you tell us a little bit more about this label?

It’s a Dutch label, in the beginning we had a good feeling with this organization but at the end we discovered this label didn’t fit our needs as much as we expected they would do.

Since we signed the label ‘Via Nocturna’, our music is gone worldwide. The reactions we get from our worldwide fans are really positive. They like the Mafia concept because it’s out of the box. And they are blown away because of the brutal production, done by Mike Wead.

Our goal is to enter all big stages and spread our word all over the world. Also creating many more new albums will be a part of our future.

Many different music styles have given us inspiration. Classical music, rock music, doom/ trash/ black-metal. Maybe to much to mention.
But some of the bands we prefer to listen to are for example Behemoth, Dimmu Borgir, Kampfar, Cradle of Filth, Fleshgod Apocalypse, Carach Angren (our Dutch colleagues), Dark Funeral, Emperor, and so on…

Music is our world but next to that for example American Classic Cars and Motorcycles.

First of all we are really happy we’ve found our partner in crime in ‘Via Nocturna’. They give us the boost we need to go worldwide and they spread our word perfectly. We are also astonished by all the great reactions the fans are giving us. Our third album Omertà is just the beginning. From here we’ll blast into the future. Let’s meet at our upcoming shows and join our Membership of Violence and Bloodlust!

Posted by OccultBlackMetal at 4:36 PM No comments: 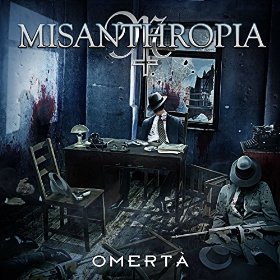 Misanthropia   plays  a  style  of  black  metal  that  is  very  melodic,  epic  and  symphonic  with  some  death  metal  touches,  the  production  sounds  very  professional  while  the  lyrics  cover  misanthropic  themes.

Posted by OccultBlackMetal at 9:35 PM No comments: