I would describe our music as symphonic black metal, influenced by classical music and death metal. What we try to accomplish is, without trying to be pretentious, a certain complexity to our songs, simply because we find it stimulating. Therefore I would say that our songs could be quite rewarding to be listened to several times. At every moment in the songs, there are several layers of guitars and synths.

On Exuvian Heraldry we promoted a more clean and epic sound, rather than the typical black metal rawness. With so much going on in the songs, with several layers of different guitar riffs/leads and synths, the soundscape is more emphasized on mid and treble, rather than bass.

3.This is your first release since 2007, can you tell us a little bit more about what has been going on during that time span?

Rehearsing, writing and recording is, as all who ever played in a band knows, very time– and energy consuming. Hence, a break was needed. A break that lasted for several years, but ended as we felt that the time and motivation had come back. We have several uncompleted songs and have started to write new ones. So expect the next release not to take as long as Exuvian Heraldry.

4.Your lyrics cover Gnosticism, Anti Christian and Phenomenology themes. can you tell us a little bit more about your intrest in those topics?

Religion in general, and Gnosticism in particular, was one of my major interest when writing the lyrics for Exuvian Heraldry. It goes without saying that as fans of death- and black metal, we are interested in understanding subjects that are beyond conventions and norms, and especially views that are contrarian or anti those. The contrarian standing-point of Gnosticism is quite fascinating and inspiring, which made it easy to apply as setting for the album lyrics. On Exuvian Heraldry the lyrics that touches upon themes of phenomenology or anti-christianity trickled down from the overarching gnostic theme.

5.What is the meaning and inspiration behind the name 'Katharos'?

The name also relates to Gnosticism, as Katharos was the denomination the Cathars applied to their community. The Cathars were a loosely organized, unhierarchical religious movement in midieval southern Europe which by the Catholic church was branded as heretic. As a result its members were persecuted and later massacred. The name is actually the greek word for pure or clean; Katharos. An interesting fact is that the Catholic church continued to call enemies of the catholic church, in general, Cathars. Today, in several languages, the word for heretic directly stems from this use of Cathars, that is; people who are against the church. Even so in the Swedish language.

We are getting offers, and are preparing to be able to play live after the album has been released on vinyl.

It has been really great. I am especially humbled by a small group of people who, since our demo (‘De Cinere’ in 2007) have kept writing to us, wondering about when new material would be released.

Yes, ‘Repuked’ and ‘Negative Self’ are two metal outfits that our members are active in.

In general we will probably maintain several elements from Exuvian Heraldry, while some of the new material, however, will have a slower tempo. The guitars will probably fill a bigger space in the soundscape, while the synth arrangements might become more symphonic. I guess ‘epic and brutal’ is the mindset!

Our main inspiration from the symphonic black metal genre is definitely Emperor, particularly in how you combine guitar leads with synths. To me, Dimmu Borgir and Anorexia Nervosa are also two major sources of inspiration.

Today I would say we consume all kinds of music, including the bands mentioned above. Within the genre, I currently listen to Obsequiae and Deathspell Omega.

Just a big ‘thank you’ to all those who enjoy and spread our music!

Posted by OccultBlackMetal at 9:28 AM No comments: 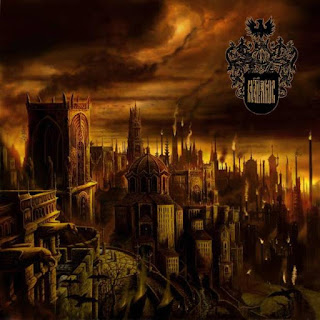 Tragic  sounding  keyboards  start  off  the  album  and  after  awhile  they  go  into  a  heavier  direction  while  also  retaining  the  symphonic  elements  and  clean  playing  can  also  be  heard  at  times  while  the  vocals  are  mostly  high  pitched  black  metal  screams  and  when  the  music  speeds  up  a  great  amount  of  blast  beats  can  be  heard.

Facebook | Soundcloud
Posted by OccultBlackMetal at 6:39 PM No comments: