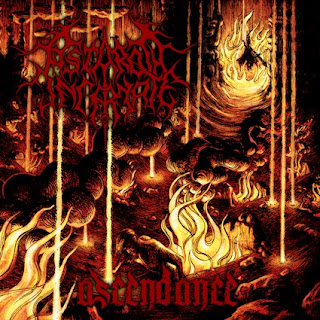 On  this  recording  Astaroth  Incarnate  goes  into  more  a  symphonic  mixture  of  black  and  death  metal  while  also  adding  in  some  avant  garde,  doom  and  goth  emtal  influences  to  takes  their  style  to  another  level.  The  production  sounds  very  professional  for  being  a  self  released  recording  while  the  lyrics  are  a  concept  album  involving  the  alpha  and  the  omega. 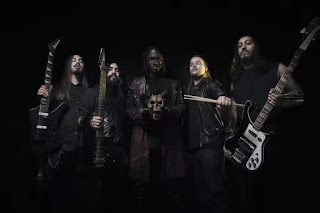 1. For those that have never heard of you before, can you tell us a little bit about the band?
- Astaroth Incarnate, literal meaning being Astaroth in the flesh. We are a Blackend/Extreme Metal band formed in October 2013 in Toronto. We consist of 5 members – Astaroth (Sam) (vocals/lyrics), Pablo (guitars), Ric (guitars), Sergio (bass), Emile (drums) and our vision is to bestow the ideologies of Astaroth to our hell spawns through our interpretations and relating them to our world and society of today. Our goal is to create extreme metal which feels limitless in its creative form while staying true to our roots and influences in metal.

2. So far you have released a demo and an ep, how would you describe the musical sound that is presented on both of the recordings?
- For our demo, we didn’t have real drums and basically did the whole thing ourselves and the result was satisfactory for the time being. When our current lineup came together, we felt a lot more confident in our material and felt that we should release the album professionally so we first demoed the whole album. Following that, we entered the studio to record all the instruments by each respective member and we couldn’t be happier with the result. Our sound for this album was focused on a delivering a blackend death metal style with clear production while the overall feeling still remaining natural and not too overproduced.

3. What are some of the lyrical topics and subjects the band explores with the music?
- All of our lyrics are built around personal exploration for each spawn to experience in their own way. There is fear, knowledge, punishment, strengthening, torture, judgement, enlightenment and many other subjects which we portray in our material.

4. I know that the band was named after a goetic demon, can you tell us a little bit more about your interest in Occultism or Demonology?
- Our front man Astaroth (Sam) from researching and reading up on demonology feels strongly connected with the demon Astaroth and in many ways connects with a lot of the ideologies that surrounds his myth. Sam believes that through invoking the spirit of Astaroth within, we are able to connect to our spawns and talk about various aspects of life as we know it and further more into the unknown and beyond.

5. What are some of the best shows that the band has played so far and also how wold you describe your stage performance?
- We have had the pleasure of opening for Beyond Creation, Shining (Sweden), Origin and Goatwhore. There are lots of other shows that we have also played which have been memorable experiences. As for our stage performance, we try to deliver live what you hear on the record. We want to sound natural and at the same time use some backup vocals and occasional playback intros/interludes to bring all the layering done in the album to our live audiences. We also focus on our visual aspect and focus on giving our audience a theatrical performance on top of playing our material.

6. Do you have any touring or show plans for the future?
- We have setup a few shows already and are in the process of locking in some more shows from September and onwards inside Canada, notably our upcoming show opening for Aura Noir. We would also love to play abroad if given the opportunity.

7. The new ep is coming out on 'CDN Records', are you happy with the support the label has given you so far?
- We are quite happy. None of us have dealt with any records labels before and so far the support we have been receiving and continue to receive can only push us to work harder and strive to go further in our career as a band.

8. On a worldwide level how has the feedback been to your music by fans of extreme metal?
- So far we are overwhelmed by the features we are getting from all over the world. No one has really said anything bad but the full album hasn’t come out yet. We have only released a single so far and the reviews on that has been generally great. We have had a couple album reviews as well and those have been great as well. When the album does come out, we would love to hear what everyone has to say. We appreciate both negative and positive reviews as they allow us to analyse how our music is being received and what we could do to further ourselves.

9. Where do you see the band heading into musically during the future?
- We have talked about incorporating some orchestration and obscure clean vocals to evolve our song writing which are hinted in this upcoming album. We plan on experimenting further for our full length to create an even more unique experience for our audience.

10. What are some of the bands or musical styles that have had an influence on your music and also what are you listening to nowadays?
- We have quite a lot of bands that we are influenced by from both metal to non-metal genres. If you were to ask of our biggest influences in writing the music for Astaroth Incarnate, the following 6 bands would suffice. Belphegor, Dying Fetus, Behemoth, Gojira, Death and Mayhem. As for new material coming out this year so far we like new releases by Carach Angren, Dying Fetus, Ex Deo, Goatwhore, Hate, Kreator, Iced Earth, Immolation, Marty Friedman, Obituary, Suffocation, Wintersun etc. There are many other great releases coming out as well which we are looking forward to.

11. What are some of your non-musical interests?
- We have quite a few. Playing video games, watching anime or tv shows/movies, cosplaying, reading books, road trips, playing sports etc.

12. Before we wrap up this interview, do you have any final words or thoughts?
- We, Astaroth Incarnate, would like everyone that listens to the album to look at it with an open mind. Read the lyrics, enjoy the music and make of it however that satisfies you. Also, be on the lookout for our full length album which we will be working on next to bring you spawns in the near future. 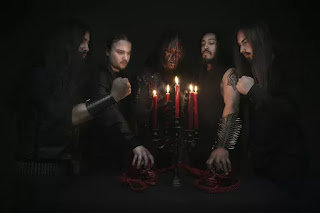 Posted by OccultBlackMetal at 8:10 PM No comments: 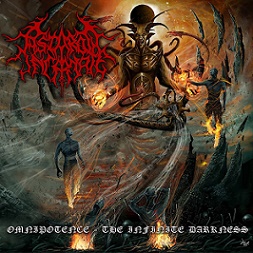 Astarath  Incarnate  plays  a  musical  style  that  takes  melodic  black  and  brutal  death  metal  and  mixes  it  with  some  elements  of  thrash,  groove  and  doom  metal  to  create  a  sound  of  their  own,  the  production  sounds  very  professional  while  the  lyrics  cover  fear,  knowledge,  punishment,  strengthening,  torture,  judgement,  enlightenment  and  occultism  themes.