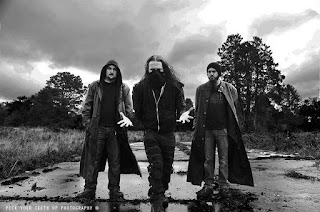 [DAMON] We are a Symphonic Blackened Death metal from the South West of the UK.


2.In March you had released an ep, how would you describe the musical sound that is presented on the recording?

[ANDY] It's four of the first songs that we wrote together, all with a slightly different feel, picked to show a range of what we can do and what we are about. Your recent review of our EP did a great job of describing things more in depth.

[ANDY] The battle to maintain some kind of identity and sanity whilst still finding purpose in a world that has lost all sense of life having any kind of meaning other than to simply exist. Dystopia is the anti-utopia. A time that is argueably already upon us. We aim to debate, examine and warn of this theory through fables, tales & metaphors.


4.What is the meaning and inspiration behind the name 'Dystopian Wrath'?

[ANDY] A fierce reaction to the decline of society.
[DAMON] We didn't have a name for the band at the time when I proposed an idea to write a few songs based on a dystopian future much like in 1984. We were interested in the topic to such a degree that we started introducing more ideas into other songs and eventually decided to use the name Dystopian Wrath, with the "Wrath" prepresenting the intensity of the music and message.

[DAMON] Non existant thus far! We've struggled to find a drummer until recently but you can expect to see this change by 2015's end

[ANDY] Rehearsals with the new full 6 man line-up start in January for a 40 minute set. We have many allies willing to play alongside us within the UKBM scene so we're hoping to get a few shows under our belts, then head off on a UK tour as soon as the opportunity arises.


7.You have a video coming out where you are doing a Bathory cover and have one of the members of Hecate Enthroned as a guest, can you tell us a little bit more about it?

[ANDY] Yeah, it's been 10 years since Quorthon's passing and still far too many young metal fans know of Bathory and their influence. So we decided to do a special tribute, covering a track we all admire aiming to give it a slightly modern twist, whilst retaining the spirit of the original. Andy Milnes was one of the first people to hear our EP as I sent it to him for feedback before the release. He really enjoyed the EP, and Hecate Enthroned are a band I have looked up to for years, so I asked if he would do me the honour of joining us on the track and he was happy to oblige. Tom from Reign Of Perdition is a friend from my area, from an amazing band who toured with Hecate a while ago and Jorge of Scandelion approached me offering to work with us some time ago, and this track presented the perfect opportunity to get to know eachother better.


8.On a worldwide level how has the feedback been to your music by fans of black and death metal?

[ANDY] Outside of the UK our most enthusiastic responses have come from Southern parts of Asia and America, with some great feedback and reviews also coming back from France, Spain and Belgium. The Uk support for a project that is yet to even take to the stage has been truly humbling.


9.What is going on with some of the other bands or musical projects these days that some of the band members are involved with?

[Damon] I play bass for the death metal band The Florentine Camerata. In October we did a small tour with Ageless Oblivion and Chapters, both of whom are exceptionally good bands. Currently though we're in the process of finalising the songs for our debut album which we should be recording soon.


10.When can we expect a full length and also where do you see the band heading into musically during the future?

[ANDY] So many of these things, like all things in life unfortunately depend on money and hooking up schedules to suit the availability of it. We have enough material for an album ready to go, and as soon as we can, it shall be out. Developing the live set up is our immediate priority.


11.What are some of the bands or musical styles that have had an influence on your music and also what are you listening to nowadays?

[ANDY] More and more nowaday I always try to support our allies and buy British Extreme metal first but I am a fan of all types of Black, Death & Power Metal! Major personal influences include Bathory, Emperor, Hecate Enthroned, Soulfallen, Belphegor, Abgott, Winterfylleth, Bal Sagoth, Vader, Graveworm and Chthonic.
[DAMON] I find that bands like Bathory, Behemoth, Emperor, Dark Funeral and Immortal have influenced me a fair bit but by no means are they the only ones. Recently I've been listening to Summoning and Caladan Brood and I'm kicking myself that I didn't start listening to these bands sooner.

[ANDY] Non music wise, I'm well into my gaming and few things beat the feel of a clear day on a motorbike.
[DAMON] I'm afraid I don't have too much of an interesting answer for this, gaming and reading. Hand me anything by H.P. Lovecraft and I'll be quite content.

[DAMON] The EP is exclusively available via UKEM Records for just £5 and keep an eye on us via social media for updates about the upcoming events, video's and releases in 2015.

Thank you for your time.

Posted by OccultBlackMetal at 4:40 PM No comments: 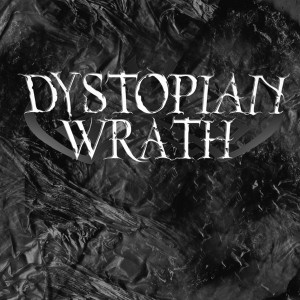 Dystopian  Wrath  take  a  very  symphonic  and  melodic  style  of  black  metal  and  mixes  it  with  the  aggression  of  death  metal  which  also  makes  there  music  more  heavy  than  most  symphonic  black  metal  bands,  the  production  sounds  very  professional  while  the  lyrics  cover  Dystopian  Area  Philosophy  and  Psychology.