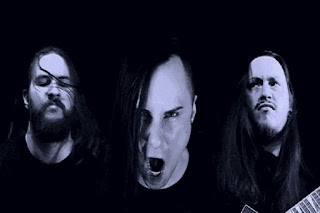 1.For those that have never heard of you before, can you tell us a little bit about the band?
-We're just three guys trying to write the most powerful songs that we can. There's nothing special about us individually, so we try to create something greater than the sum of its parts.

2.Recently you have released a new album, musically how does it differ from the stuff you have released in the past?
- Lest They Feed Upon Your Soul is really just a maturation of the sound we've been building for years now. More speed, more tech, more atmosphere, more melody.

3.This is your first album since 2015 can you tell us a little bit more about what was going on during that time frame?
-Most of this album was written and recorded before the end of 2017. I couldn't finish the lyrics to most of the songs even after the music was recorded. Nothing seemed good enough. The rest of the guys jumped in to help me and we finished it. Part of the time we were just obsessing over the mix and master which we did ourselves. We learned a lot in the process and have committed ourselves to releasing something every year from here on out.

4.What are some of the lyrical topics and subjects the band has explored over the years with your music?
-The main themes: death, dying, the inevitability of death, and of course, being dead. I've found that to think often and well of death builds a firm and lovely frame in which to view the life held therein.

5.What is the meaning and inspiration behind the name 'Seraph In Travail'?
-In highschool my buddy Wes played guitar with me; at a practice he said I sounded like an angel giving birth. The phrase struck a chord with me. Later it went through a thesaurus and came out as Seraph In Travail; it's now more of a mascot name than anything.

6.Can you tell us a little bit more about the artwork that is presented on the new album cover?
-Ollie Gill is a tattoo artist/composer/guitarist from Ireland. His band is called The Blessing Way. I've been following his art and music online for awhile, and I realized he would probably be able to hear the music and represent it visually. I was right. All I told him is I wanted to see a warrior with his back toward the viewer, facing down a massive evil force.

7.What are some of the best shows that the band has played over the years and also how would you describe your stage performance?
-Our best shows have been since Mike Shaw took over on drums in 2016. He's a dyed-in-the-wool death metal drummer who leaves nothing to chance. We've really only ever played locally, but our best shows were at the Whiskey Tango and the Trocadero in Philadelphia, both of which are closed now RIP. We try to use movement and facial expression make the show a convicted communication of the music rather than a recitation.

8.Do you have any touring or show plans for the future?
-We will continue to play locally for now; further out, if the album is decently well-received, we'll look at options to do our first tour as a buy-on situation rather than book it ourselves.

9.Currently you are unsigned, are you looking for a label or have received any interest?
-There was some marginal interest from a few newer labels after our first album, nothing since this last album. We're not really out shopping either. If somebody wants to come in and can help us do specific, objective things that we cant do for ourselves we'll consider it, otherwise we'll just keep making music at our pace.

10.On a worldwide level how has the reaction been to your music by fans of black, death and symphonic metal?
-Hard to gauge from where I stand. Seems like a few diehards are really into it just from what I can see on the comments. It seems like the video for Temptress has alot of views. I'm looking forward to getting some critical reviews.

11.Are any of the band members currently involved with any other bands or musical projects these days?
- Dan is working on a solo project which is mainly finalizing unfinished material from his last band. He's considered doing it as a Seraph album. Mike has done fill-in tours with Grave Gnosis and session drums with Nakhiel, hes also studying for a degree in music so he's playing all the time. I filled in with Malphas for a few months until they got a full time bassist.

12.Where do you see the band heading into musically during the future? -Were working on two things now, one is probably going to be an EP full of covers of classical music in tech death style: Bach, Vivaldi, etc. The other is a concept album on which we're trying to create a more soundtrack feel and sharpen our rhythmic edge.

13.What are some of the bands or musical styles that have had an influence on your music and also what are you listening to nowadays? Obviously classical music is a big player for us. My greatest phobia is plagiarism, so if I hear a great song I try not to listen to it often. That said, I've recently listened to Abiotic, the Kennedy Veil, Angelseed, Since The Fire, and Erciyes Fragment (!) ...do yourself a favor.

14.What are some of your non musical interests?
-Science and math. I used to love sci-fi, but the -fi part just got boring. So I'm back in school. Every day is like the one good part in a movie where they explain the hypothetical ideas or drop words you want to look up.

15.Before we wrap up this interview, do you have any final words or thoughts?
-We appreciate the opportunity to do these questions. To the reader, thanks for giving our music a chance. If it means something to you please give it to someone else. 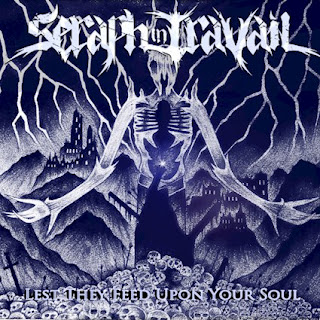 Throughout  the  recording  you  can  also  hear  a  decent  mixture  of  both  modern  and  old  school  elements  along  with  most  of  the  tracks  being  very  long  and  epic  in  length.  Spoken  word  parts  can  also  be  heard  briefly  as  well  as  one  of  the  tracks  also  introducing  female  vocals  onto  the  recording.  The  production  sounds  very  professional  for  being  a  self  released  recording  while  the  lyrics  cover  dark  themes.

Posted by OccultBlackMetal at 7:05 PM No comments: