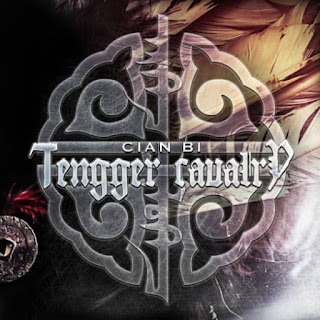 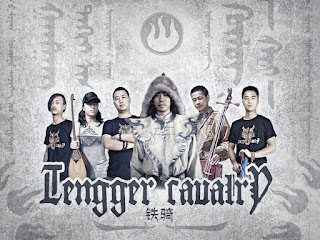 1.Can you give us an update on what is going on with the band these days?
Sure. After the new release of 2015, I am preparing to re-build the band in United States and tour. So far we still couldn't perform yet, but I believe we will be ready to charge very soon!

2.So far this year you have released a full length, a single and also have been a part of a split, how would you describe the musical sound of the newer music?
The new music is more soundtrack feeling I would say. I intentionally limit the use of lyrics, giving more space for musical arrangements and instrumentation. I want to keep experimenting new stuff rather than repeating the previous work.

3.Your lyrics cover Shamanism., Tengrism and Mongolian Shamanism, can you tell us a little bit more about your interest in these topics?
I always connect with nature and animals, and that's where i find my inner peace. Shamanism is all about worshiping nature, sky, etc. So I studied it and practice it.

4.Also the band is named after Tengger, a sky father from the Shamanism of your homeland, are you also familiar with the mythology of other cultures and also how would you compare the Eastern and Western Mythology's?
Yes I like Celtic paganism and Viking paganism. They all worship nature. But the difference between western shamanism and eastern shamanism is, I personally think, eastern is more like mono, and western is more poly. Tengger is considered the one dominant god of the nature, while in western paganism there are a bunch of gods that work separately to keep nature functioning.

5.Originally the band started out as a solo project, what was the decision behind hiring a full time line up?
People keep giving me feedback that they loved the music and they REALLY want to see us on stage. So that's basically the main motive.

6.What are some of the best shows that the band has played so far and also how would you describe your stage performance?
We played once in Strawberry Festival in China, where millions of people visited the festival per day. I remember thousands of audience head banging with our music. It is beyond awesome.

7.Do you have any touring or show plans for the future?
Yes, once we are ready for it, we will try to tour in US, starting with Eastern Coast.

8.You where recently part of a split that was released on Mongol Metal, can you tell us a little bit more about this label and your contributions to the split?
This label is run by me myself. I want the world to know that there is a new oriental genre rising. People keep asking why there is no Asian metal, and this is my answer to the world.

9.Your current full length was released on Metal hell Records, can you tell us a little bit more about this label?
MHR is an independent heavy metal label in Minnesota state. We have been working with them for 4 years and it went pretty well. Looking forward to release more stuff in the future.

10.On a worldwide level how has the feedback been to your music by fans of folk metal?
People find our stuff very original and refreshing. They never experienced something like this before.

11.Are any of the band members also involved with any other bands or musical projects these days?
Not really.

12.Where do you see the band heading into musically during the future?
I couldn't say yet. I guess the day when we walk into the studio, our emotion and experience will decide what new sound we will have for the new release.

13.What are some of the bands or musical styles that have had an influence on your newer music and also what are you listening to nowadays?
Many European folk metal bands like Eluveitie, Korpiklaani, Turisas, etc. Also new-folk and soundtrack music influenced me a lot.

14.What are some of your non musical interests?
I ride horse and do boxing. I like sports.

15.Before we wrap up this interview, do you have any final words or thoughts?
Thank you so much for the great opportunity to interview us. It is a pleasure to share the story of Tengger Cavalry
www.facebook.com/tengger0cavalry
http://www.mongol-metal.com/
Posted by OccultBlackMetal at 9:21 PM No comments: 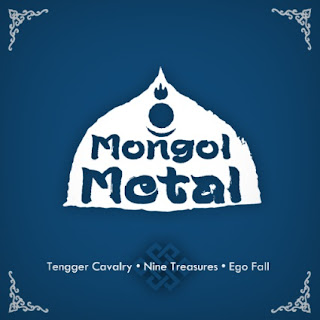 A  powerful  sounding  bass  guitar  starts  off  their  first  song  along  with  some  tribal  beats  and  melodic  yet  heavy  riffing  and  the music  also  mixes  in  folk  instruments  that  also  gives  their  song s more  of  an  ethnic  feeling  and  the  vocals  have  some  type  of  shamanistic  style  chanting  and  they  also  bring  in  black  metal  screams  and  some  of  their  songs  mix  in  growls  and  elements  of  melodic  death  metal  and  metalcore  along  with  a  touch  of  electronic  music  and  the y also  add  in  a  small  amount of  guitar  leads, spoken  word  parts  and  female  vocals,  the  production  sounds  very  professional  while  the  lyrics  cover  the  ethnic  themes  of  their  homeland.

Acoustic  guitars  and  ethnic  instruments  start  off  their  first  song  along  with  some  folk  music  elements  and  heavy  guitars  as  well  as  some  black  metal  screams  and  the  riffs  also  bring  in  elements  of  melodic  death  and  modern  metal  at  times  as  well  as  balancing  out  both  the  folk  and  heavy  parts  and  when  solos  and  leads  are  utilized  they  bring  in  a  great  amount  of  melody,  talent  and  skill,  the  production  sounds  very professional  while  the  lyrics  cover  Tengrism,  Shamanism  and  Mythology.

Bass  guitars  start  off  the  first  song  along  with  some  drums  and  a  few  seconds  alter  the  music  starts  to  get  heavier  along  with  some  melodic  guitar  leads  and  the  vocals  they  use  are  in  more  of  a  folk  metal  direction  and  they  also  mix  in  acoustic  guitars  and  folk  instruments  in  with  the  heavy  parts,  the  production  sounds  very  professional  while  the  lyrics  cover  Mongolian  Folklore.

Posted by OccultBlackMetal at 11:40 PM No comments: