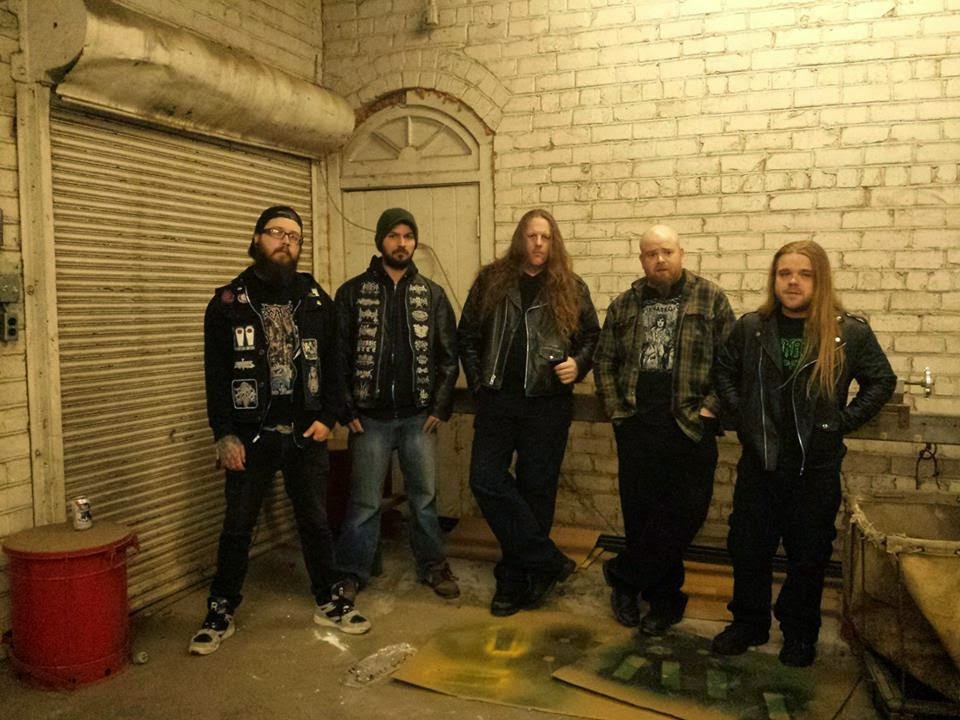 We have been pretty busy since recording the album.  We recently added a 2nd guitarist (Jason Grevas) to the lineup so we have been busy showing him the songs we usually play live.  We have also been working on writing new material for a split release that we are going to do with a bad ass New York grindcore band called The Communion.

2.Recently you have released a new album, how would you describe the musical sound of the new recording and also how does it differ from your past releases?
I personally feel like this album is a bit more varied than our debut album (Storms of Genocide) was.  The reason for this is we had some older songs left over from our very earliest days as a band that we thought were too good to not release, so we reworked them a bit and decided to include them on this new album.  Most of those songs have a bit more of a southern sludge sound to them.  The rest of the material on the album is brand new and has a bit more of a evil black metal vibe.  We knew that this combination would make for an interesting album and that some people might accuse us of jumping from genre to genre too much, but we didn't care.  We knew we would be happy with it and our label (Horror Pain Gore Death Productions) was happy with it so I feel we did the right thing by including those older songs.  We arranged the song order in a way that i feel takes the listener on a pretty interesting ride because of the variety in the songs.

3.Can you tell us a little bit more about the lyrical topics that the band explores with the new release?

I wrote a few verses for "Aura of Suicide" that is inspired by the cluster migraines i used to suffer from.  Other than that Blakk wrote all of the lyrics.  He gets a lot of inspiration by watching documentaries about the dark side of reality.  He is fascinated with serial killers, war, torture, and various other topics.  The overall lyrical and visual theme to the album is pain, whether it be physical or emotional, and how every human has to go through it at some point in their lives. Pain is inevitable.  There is no escaping it.  Every member of the band has gone through dark and painful times, and we have all found ways to overcome these things so we wanted to reflect on that with this album.

4.What is the meaning and inspiration behind the name 'Helmsplitter'?

Our drummer came up with the name Helmsplitter.  He actually got the idea from a video game that he likes, apparently in this game there is weapon called the Helmsplitter that will pretty much destroy anything.  We like to think that our music is pretty powerful and destructive so we thought it was a good fit.  Plus we just liked the way it sounded haha.

5.What are some of the best shows that the band has played over the years and also how would you describe your stage performance?
Some of the shows that stick out in my mind are when we opened for Rwake, they are one of my favorite bands and playing with them was an honor.  Same goes for the time we opened for Jucifer.  The cd release show for our first album was outstanding also, as was the show we just played with Against the Grain.  We have had quite a few shows that went very well and were a blast to play.  Of course we have played plenty of shows that sucked also.  You have to take the good with the bad i guess.  Our performances are usually pretty intense and full of energy, you have to be intense and full of energy to play this stuff!  There isn't a lot of flash or bells and whistles, we just get up there and let it rip.  Blakk doesn't do a lot of talking to the crowd and we don't do a lot to try and pump the crowd up or anything....we just perform our art as well as we can and hopefully the crowd enjoys it.

6.Do you have any touring or show plans for the new release?

We have a few shows around the midwest set up and are working on setting up a short east coast run.  Other life obligations make it hard for us to just jump in a van and tour for months, but we try do as much "weekend warrior" stuff as we can.  I think we will start hitting it pretty hard once our new guitarist has a sets worth of material down.....and he is a freaking beast of a guitarist so that won't be long from now.

7.On a worldwide level how has the feedback been to your music by fans of extreme and underground metal?

The feedback from the underground metal world has been very positive.  Of course there is always going to be some people out there that aren't going to like what you do, you can't please everyone.  We try not to worry about it too much but we are only human and of course are going to pay attention to reviews and things like that,  and for the most part the feedback has been very positive.  Our first album got some great reviews and got us signed to Horror Pain Gore Death Productions so that was a success, and so far the reviews we have been getting for the new one have been great.

8.What is going on with the other musical projects these days that a couple of the band members are involved with?

Nate, Lyndon, and myself are in another band called Obsidian Hammer.  It is a mix of sludge, doom, and crust punk.  Imagine Eyehategod and Bongzilla mixed with Discharge and you will be on the right track.  It is in its infancy but is off to a very good start.  We opened for Church of Misery for our first ever show, and have opening spots lined up for Spirit Caravan and D.R.I. so things are going well.  Blakk has been the mastermind behind Angelkill for around 20 years and he is still going.  It has pretty much turned into a one man band and I think he prefers it that way.  He is also involved with Mortuary Oath, as well as creating scores for video games and movies.  Our new guitarist Jason was involved with Through Terror and King of Clubs but they are both inactive now.

Helmsplitter has been going more and more into a dark, evil direction.  Future releases will be more focused on the black metal/grindcore side of things and will probably have less southern sludge parts.  There will still be slow sections but they will probably be more along the lines of Craft than Crowbar.  Some of the members we had in the past were pushing for more of the southern sound, which we are getting away from more and more.  That element will always be there but it is going to be less and less prominent as time goes on.

Well the band that probably has had the biggest influence on us has been Soilent Green simply because i basically learned how to play and write music by hanging out with them and watching them practice and perform.  The way they have dramatic tempo and time signature changes really rubbed off on me.  I cant imagine how long the list would be if i were to start naming off bands that have influenced us.....we all are into so many different styles its nuts.  But as far as directly influencing what we are currently doing with Helmsplitter I would say black metal is the biggest influence right now.  We are all fans of a lot of the older Norwegian stuff like Mayhem, Darkthrone, Emperor, etc etc......Craft is a huge influence.....also grindcore like Pig Destroyer and Napalm Death....I could go on and on!  Personally I have been listening to mainly black metal like the bands i mentioned as well as a ton of sludge, doom, and stoner rock.  Eyehategod and Electric Wizard are pretty much always in my rotation of cds im listening too.

11.How would you describe your views on Occultism?

The occult is something i am somewhat fascinated with but I don't have an extensive knowledge or any really strong views/opinions of.  I am a very non-religious person and i think a part of me has always kinda lumped occultism in with religion.  Although I will say i have read some things about various cults or cult leaders that i do agree with.  For example i am pretty big believer in the whole "Do what thou will, that shall be the whole of the law" frame of mind.  I am not a fan of authority or laws of almost any kind so that mindset does appeal to me.  I don't really feel I am educated on the subject enough to elaborate much more however.

My main non-musical interest is nature.  My family goes to the Canadian Border fishing every year and the beauty of that wilderness is awe inspiring.  Alone in the wilderness is one of the only places I truly find peace.  I used to be a video gamer and a reader as well.  However lately it has basically all been about music for me, with two bands going full time it is hard for me to make time for hardly any other hobbies or interests.  And that is fine with me, because I am basically obsessed with making music and there is nothing that makes me happier.

I guess I would just like to say thank you to anyone who reads this and bothers to take the time to check out Helmsplitter, hopefully you like what you hear.  The best is yet to come from this band, our musical vision is becoming more clear and focused and the addition of Jason on 2nd guitar is really going to propel us to the next level I believe.  Also I would like to thank you guys for the interview! You can stream the whole album here: http://hpgd.bandcamp.com/album/enraptured-by-suffering

Posted by OccultBlackMetal at 10:08 AM No comments: 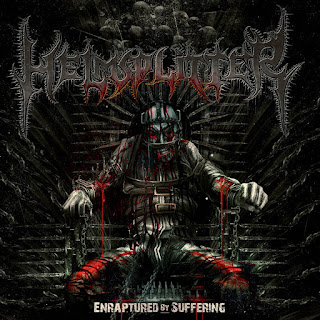 The  album  starts  out  with  a  very  fast  and  heavy  sound  which  uses  black  metal  elements  and  blast  beats  before  adding  in  blackened  metal  screams  and  growls  before  slowing  down  and  adding  in  doom  metal  and  sludge  influences  and  they  also  bring  out  some  crust  and  thrash  metal  sounds  in  the  faster  material  and  all  of  the  musical  instruments  have  a  very  powerful  sound  to  them.

Song  lyrics  cover  dark,  occult  and  hateful  themes,  while  the  production  has  a  very  strong,  powerful,  heavy  and  professional  sound  where  you  can  hear  all  of  the  musical  instruments  that  are  present  on  this  recording.

www.facebook.com/Helmsplitter
Posted by OccultBlackMetal at 2:50 PM No comments: