1.Can you give us an update on what has been going on with the band since the release of the live album?

1)      Hi. This album celebrates our 20th anniversary, it was the perfect chance to release something very special, that is live, and on vinyl, which has been our dream in a drawer for many years. It’s been just released so for now we are enjoying the feedback from fans while preparing out 20th anniversary gig that will take place in our hometown, Rimini, Italy on May 18, 2018.


2.How would you describe the musical sound of your current music and also how would you describe your progress over the years as musicians?
2)      We have always been devoted to experimenting different sounds, by integrating diverse influences in our own vision of extreme metal. We stay true to this ideal to this day, even though we have moved towards a more technical and brutal side of our sound. Let’s say in the beginning we sounded a bit more blackish and now we are a little bit more death metal oriented, yet our gothic, progressive and avant-garde remains really vivid.

3.What are some of the lyrical topics and subjects you have explored over the years with your music?

3)      Lyrics are the representation of a personal path. I have explored many themes over the years but through the prism of my own vision and I have analysed mostly themes related to spirituality, mysticism, abstractionism of the soul, through a study I’ve made of their connection to the human feelings and ways of life.

4.What is the meaning and inspiration behind the name 'Hortus Animae'?

4)      Hortus Animae is Latin for the Garden of the Soul. This moniker fully reflects what previously said not only lyrics-wise but also music-wise. Our music and lyrics make up a scenario where you can go and find shelter and time for rest and reflections.

5)      It’s nearly 20 years that we hit stages and every time it’s a wonderful and magical experience. Our warmest memories go to the gigs we shared with Napalm Death, Ancient, Lacuna Coil, Mortuary Drape, Necrodeath and last but not least the almighty Necronomicon.

Our performances are mostly focused on the music, no frills. There is a big energy  from us to the audience and vice versa. This atmosphere has been fully captured in our live album “Piove Sangue”.

6)      Not yet, as said for now we are organizing our 20th anniversary gig, surely other gigs will follow during summer but nothing confirmed so far.

7)      Every metalhead on Earth has gone through Slayer and “Raining Blood”, it just seemed the perfect song to end our shows during the Total Metal Over Europe Tour, Pt. II with Necronomicon.

8.Also on the same song you also had some session work from the singer of 'Necronomicon', can you tell us a little bit more about his involvement on the recording?

8)      It was the result of fellowship we developed during the tour and that has culminated with this recording, which was totally unplanned and came spontaneously. It was the very last night and we knew we were going to record a live album there, Freddy came to me and proposed to do “Raining Blood” together, I said “fuck yeah!” and then he just came on the stage for a very fiery version of that song. It’s been awesome.

9.On a worldwide level how has the feedback been to your music by fans of black and progressive metal?

9)      We have a very good welcoming in our home, Italy. But I have to say we also have a loyal fanbase abroad as well. During our 8 years hiatus we kept receiving mails from fans from all over the world and they have played a big role to getting us reunited, beside making music together.


10.What is going on with some of the other bands or musical projects these days that some of the band members are a part of?
10)   Each and every one of us other bands also not related to metal. The bands that are mostly in the metal vein are Desmadre’s Crawling Chaos that play death metal and my solo project Martyr Lucifer where we play gothic.
11)   Right now we are writing new material for the follow up to 2014’s “Secular Music”, we really can’t tell what direction we will fallow as our way to compose is really unpredictable thanks to the fact that we all are musicians coming from different musical backgrounds.

12)   I don’t know, if we really have to mention bands, I think I might mention Enslaved, early Opeth but also Cradle of Filth at some point. But just to give you an idea, our vision of music is really personal in the end and we’ve always been extremely open minded and we listen to the most diverse styles of music. This surely contributes to the formation of our sound as well.

13.Does Occultism play any role in your music?

13)   Occultism, yes, it’s important. Not the main thing, though. Mostly spirituality, as said before, with no link to any particular religion. Pagan symbolism plays a big role as well.

14)   Even though music is one the leading lines of our lives we all have different interests, like everyone, like movies, reading, some of us are DJs, sometimes I do horse riding, etc.

15)   Thank you very much for this interview and we hope we’ll be playing in the US anytime soon. Cheers! 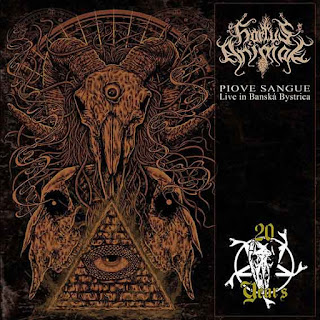 Hortus  Animae  plays  a  style  of  black  metal  that  is  very  avant  garde,  symphonic  and  progressive  sounding  along  with  some  goth  touches,  the  production  has  a  very  raw  and  live sound  while  the  lyrics  cover  Surrealism,  Death  and  Sadness  themes.

Posted by OccultBlackMetal at 7:29 PM No comments: 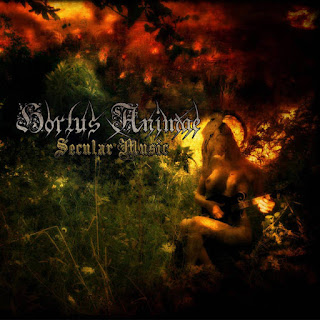 Posted by OccultBlackMetal at 10:19 AM No comments: