1.Can you give us an update on what has been going on with the band since the recording and release of the new ep?
We recorded these tracks during summer 2018, to release this EP in 2019, since then everyone of us has been busy with other music projects and bands. We like to explore many different aspects of music and just one band is not enough!

2.Recently you have released a new ep, musically how does it differ from the stuff you have released in the past?
This one is more straight-forward than the other works we released before, the idea was to keep a "less thinking and more doing" approach! The previous composition process was too slow and didn't leave us time to follow the other projects.

3.The lyrics on the new recording are a concept album, can you tell us a little bit more about the story you had covered on the new release?
Our concepts are never too strict: there isn't a precise story that goes from the first song to the last. Even this time we're talking about a journey, there's an intro and then "Crystal Ice" that talks about the voyage of a crew that fights against the weather; when the ship finally reaches the destination, there's only the shipmaster, and a crewman, left. This is about everything and everyone you lose while in your journey, it's a song about loss; the marvelous view of the aurora borealis and the polar lands was the destination, can it compensate the loss? Was it worth it? Then there's "Dominatio Tempestatis", talking about a tiny cloud that grows becoming a dreadful storm. "Raptus" is a song talking about being driven by insanity: in the other songs it's nature that carries the man, while in this one the mind has the same role; this gives another key to decipher the concept. "Storm of Revenge" takes us again inside a ship, where the crew is facing a storm: the ship's being torn to pieces by the elements and a crewman who's about to fall pledges not to challenge the sea again. The entire concept is about how's difficult to oppose to the nature (the elements), to our nature (our mind); are we choosing our path or are we driven by a current?

4.So far most of the releases have been ep's or demo's with the only full length being released in 2013, can you tell us a little bit more about going this route?
So many things to do, so little time!

5.What is the meaning and inspiration behind the name 'Secretpath'?
This last concept I've described before is a perfect example: when you think about the story and feelings we present in the songs, you can make your own idea about the secret path that stands before us. Everyone is following, or is driven by, his own path; sometimes it is a road we can easily see, other times it is a hidden path, more often it is a secret path and we can't know where it will take us.

6.Can you tell us a little bit more about the artwork that is presented on the ep cover?
This artwork was made by Lisa Bilotti, former (and first) bassist of the band; it depicts our Wanderer that faces the ocean waves, following his (or her) path towards... the unknown!

7.What are some of the best shows that the band has played over the years and also how would you describe your stage performance?
I remember a nice show in Foggia in 2014, it was something I could never forget. We were cool about it and everything went smoothly, by the time we finished we suddenly realized the show was over! We were dressed poorly: I were weirdly formal (necktie included), the other ones on gym clothes or flannel shirts, and I can still remember the laughs and the looks of the crowd. When the music started we delivered our mix of brutality and melody while smiling and joking.

8.Do you have any touring or show plans for 2019?
Not that I know! We even miss a bassist, in fact the bass was recorded by Pierluigi Ammirata, our guitarist.

9.On a worldwide level how has the reaction been to your newer music by fans of melodic black and death metal?
We know we're an unusual band: our music doesn't fit exactly a genre, we like to keep ourselves open minded and this makes our music difficult to be labeled as one genre or another. The result is that we can have fans from every genre, but we can also disappoint fans from every genre of music! If there's something that often raises some interest is my way of singing, using many different vocal techniques; some love it, some hate it.

10.When can we expect another full length and also where do you see the band heading into musically during the future?
That is another secret path I'm afraid!

11.What are some of the bands or musical styles that have had an influence on your newer music and also what are you listening to nowadays?
Well I try to listen to everything I can get my ears on! Seriously: radio music, folk music (from every corner of the world), classical music, rock and metal, musicals too... everything (even the things I don't like!), just to keep myself open-minded and to find inspiration everywhere. My choices are almost always random and I try to keep them weird if possible, better if mixed with extreme Metal: Laurent Lunoir and Laure Le Prunenec (from Igorrr and many other bands) are among my favorites!

12.What are some of your non musical interests?
Well I'm a bit of a nerd: so videogames and Dungeons & Dragons, reading fantasy and historical novels... these kind of interests along with beer drinking and eating/farming hot peppers!

13.Before we wrap up this interview, do you have any final words or thoughts?
I wish to thank you and the poor souls who read this all, I assure you: the music won't be so boring!

Posted by OccultBlackMetal at 5:04 PM No comments: 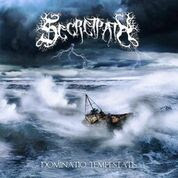 Water  sounds  can  also  be  heard  briefly  along  with  one  track  also  adding  in  acoustic  guitars  and  throat  singing.  At  times  the  clean  vocals  also  get  very  operatic  sounding  and  some  of  the  sections  of  the  music  also  adds  in  death  metal  growls, progressive  and  groove  metal  influences.  The  production  sounds  very  professional  while  the  lyrics  are  a  concept  album  based  upon  a  seaman  fighting  against  the  ocean.

Posted by OccultBlackMetal at 5:09 PM No comments: