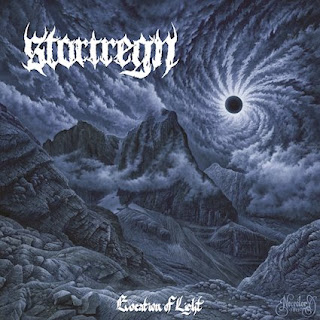 Classical  guitar  playing  starts  off  the  album  before  going  into  more  of  a  heavier  and  melodic  musical  direction.  When  the  music  speeds  up  a  decent  amount  of  tremolo  picking  and  blast  beats  can  be  heard  along  with  the  vocals  being  a  mixture  of  death  metal  growls  and  black  metal  screams.

On  this  recording  Stortregn  played  a  style  of  melodic  black/death  metal  that  was  very  influenced  by  the  Swedish bands  of  the  genre.  The  production  sounds  very  professional  while  the  lyrics  cover  sadness  and  desolation  themes.

Posted by OccultBlackMetal at 11:21 PM No comments: 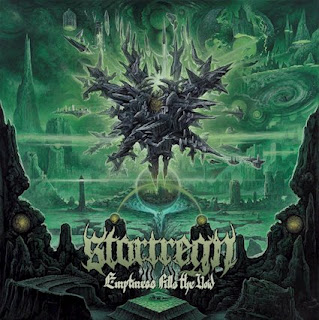 Stortregn  creates  another  recording  that  remains  true  to  their  melodic  mixture  of  black  and  death  metal,  the  production  sounds  very  professional  while  the  lyrics  cover  scientific  and  philosophical  themes.

Posted by OccultBlackMetal at 7:08 PM No comments:

1. Can you give us an update on what has been going on with the band since the recording of the new album?

Well, the line-up has changed a bit as we quite recently got a new bass player. While working on the new album, we also toured through France and Eastern Europe. To top it all, played at Wacken last summer. Besides that, we are working on a Stortregn beer and composing new songs. We're in a constant composing state of mind.

2. You have a new album coming out in May, how would you describe the musical sound that is presented on the recording and also how does it differ from the stuff you have released in the past?
The band is getting more mature. The compositions are more complex and varied than Evocation Of Light, which was more of a traditional melodic black metal style. Singularity is far more personal, more death and technical, with odd time signatures coming up. We payed also more attention to the sound of the album, it is deeper and richer than Evocation of Light.

3. What are some of the lyrical topics and subjects the band explores with the music?
A "singularity" in general relativity designates the region at the center of a black hole, where the laws of space and time cannot apply and cannot be measured. A point where the spacetime curvature becomes infinite. This idea of lawlessness is present all time in this album, both musically and lyrically, exploring it's diverse forms and application in life and space.

4. Originally the band was called 'Divine's Smile' and 'Addict Repulsion', what was the cause of the name changes?

In early 2005, when we started to explore darker music, we passed through a lots of line-up changes, and our music evolved very fast. At a certain point, we wanted to have a clean start, that’s why we changed our name and chose something which fits better with the band.

5. I know that the bands name means 'downpour' in Swedish, how does this name fit in with the musical style that you play?

The music of Stortregn has this cold and dark feeling that can be associated with this image. It can also be associated to a gloomy and melancholic atmosphere.

6. What are some of the best shows that the band has played over the years and also how would you describe your stage performance?

Our performances are a mix of blood, ripping riffs and blast insanity. We give our maximum, both mentally and physically. For us, our best experiences where at Wacken 2015, although we had some great shows in France last year and our tour in Eastern Europe. A small club in Romania comes to mind......

7. Do you have any touring or show plans once the new album is released?

The 20th May in Grenoble, and the 27th May in Geneva are already confirmed. We are working on a tour for the end of the year and some other dates around that period will follow.

8. On the new album you had a few guests, can you tell us who they are and also their contributions to the recording?

The musicians we invited play a big role in our musical influences. They are amazing musicians and great person to work with. Simon (Beyond Creation) and Steffen Kummerer (Obscura, Thulcandra) each play an amazing solo on « Omega Rising » and « Black Moon Silhouette ». Ville Viljanen (Mors Principium Est) and Vladimir Cochet (Mirrorthrone) are doing some great vocal lines on « Vertigo » and « Acosmic Ascendant ».

9. On a worldwide level how has the feedback been to your music by fans black and death metal?

Feedback has been generally positive. We've been very often related to Dissection, which is an honor as well as a huge problem. The honor, of course is to be compared to them. The problem is that we cannot do anything without being labelled as "cover band". Which we are not. Dissection was a true source of inspiration, a starting point. However, we are going our own way.

10. Are any of the band members also involved with any other bans or musical projects these days?

Johan is classically trained, he works as a classical guitar teacher. Romain is part of different death and hardcore local bands. Sam has some jazz, funk and ska projects and Duran has had various projects in the past, though Stortregn is the only one at the moment.

11. Where do you see the band heading into musically during the future?

12. What are some of the bands or musical styles that have had an influence on your music and also what are you listening to nowadays?
In non-metal, each of us listen to different stuff like Classical or Jazz from 60s to nowadays. In metal, besides those who were invited in the album, we can point to Gorod, Inferi, Animals As Leaders, Tribulation, and so on.

13. What are some of your non musical interests?
Beer brewing, eating, drinking, studying...

14. Before we wrap up this interview, do you have any final words or thoughts?
Thanks to everyone who has supported Stortregn during all these years. Enjoy the new album and see you on the road bitches!

Posted by OccultBlackMetal at 10:47 AM No comments: 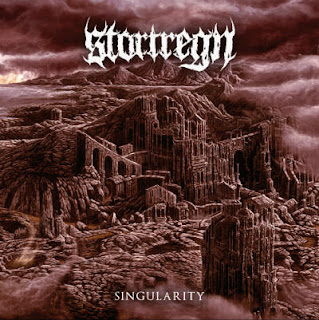 And  as  the  album  progresses  classical  guitars  also  make  a  return  in  certain  sections  of  the  recording  and  there  is  also  a  brief  use  of  whispers  while  some  riffs  also  incorporate  elements  of  thrash  and  some  songs  also  bring  in  spoken  word  parts  and  they  also  bring  in  an  instrumental  acoustic  track  before  closing  the  album  with  a  heavier  song.

Posted by OccultBlackMetal at 3:24 PM No comments: