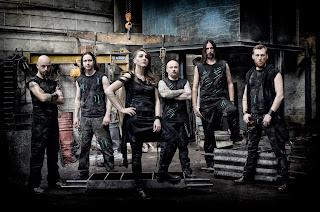 Hi guys, now our goal is to promote the new album organizing a lot of gigs, so we are working to the live activities for the next Autumn. (And we are taking breath after the long and hard work we have done to produce “The Day Of Return”).

Well… our music is basically a melodic death metal but we use to add folk and epic influences. In this new album the folk side is far eastern oriented with sounds from the tradition of Japan and Mongolia so you will find fascinating atmospheres.
This time we have faster guitars than the older tracks and we introduced some solos too (we are not lovers of exaggerated solos). The production is definitely better. And, as said, we have different traditional instruments compared to the other two albums where you can find harps, transverse flutes, brasses, etc…

3.On the new album you also added in throat singing, Mongolian and Japanese instruments, do you feel you are adding some new things to the folk metal genre, with the new recording?

We know some bands already used those kind of sounds, but we think this is a new entry for the Italian metal scene. Of course, this is unusual and it’s one of the reasons why we chose this way and we’ll continue to explore the music and traditions out there in all the world.

4.What are some of the lyrical topics and subjects the band explores with the new album?

The texts were written on the basis of real sensations experienced in different moments of life (such as difficulties, challenges, misunderstandings, meetings).
From personal experience, loving the natural side of life and therefore the many links with the outside world, we want the album to describe the interactions of a man and his encounters with people and places that have inspired and influenced his character, destiny and journey.

5.Originally the band started out playing covers, what was the decision behind moving into your own material?

To play covers is funny and it’s a good starting point for your activity, but with the passage of time it became boring so Matteo (who founded the band and at that time he was the only one of the actual line-up) felt the need to write his own music and has changed the direction of the band.


6.What is the meaning and inspiration behind the name 'Ephyra'?

The name Ephyra was immediately adopted at the beginning and it comes from a fantasy videogame (Severance – Blade of darkness). It was chosen to represent a hypothetical reign where the stories of our first album’s songs took place. From the second album our lyrics are no longer focused on that concept.

Our best shows probably were Malpaga Folk and Metal Fest 2017 with Tyr, Rock Inn Somma 2016 with Gli Atroci and Fosch Fest 2015 with Carcass, Satyricon, Finntroll, Manegarm, Heidevolk, Arkona, Dalriada, etc…
About the stage performance we work hard on each aspect trying to be as professional as possible. Reports tell us we are doing it quite well .

Nowadays we have some shows confirmed in summer and autumn. Of course, we want to promote “The Day Of Return” and we are working to other gigs in Italy, but we are planning to play in Europe too. If someone who’s reading these words wants us for a show he can write to booking@ephyra.it.

9.The album was released on 'Volcano Records & Promotion', can you tell us a little bit more about this label?

Volcano is a new and young label in which we have found a concrete partner to work with. Since now we are very happy with what has been done with them both in organizational and human terms. We can say that day by day we are receiving important news and opportunities. We like to be and play an important role in the Volcano family.

10.On a worldwide level how has the feedback been to your new album by fans of folk and melodic death metal?

It's a bit early to evaluate. Reviews are good, but we don’t have yet a report about sold copies (physical or digital).

We really don’t know . It would be cool to conquer the northern Europe, South America and Japan but the only thing we can do is to keep on working as our best and see what will happen.

Each of us is different and have different preferences and influences. About the music, you can find melodic death metal like old In Flames or Amon Amarth or Ensiferum or Eluveitie, melodies remembering Amorphis, Vocals like Within Temptation, folk atmospheres that let you think to Loreena McKennitt. It’s hard to find a correct definition and a real influence, we usually write our songs naturally without thinking about other bands/musicians.
In this period, we are listening to (2 options for you):
John: Kasabian, Art Blakey
Patrick: Behemoth, The Meters
Nadia: Arkona, Dream Theater
Francesco: Iced Earth, Wolfheart
Mat: Ennio Morricone, Enigma
Diba: Five Finger Death Punch, Hardcore Superstar

Thank you very much for your time and space. We invite your readers to take a listen to our new album “The Day Of Return”, buy it if they like, and give us their feedback.
It is available digitally on all the platforms and physically on www.ephyra.it.
Have a good life and stay Ephyra \m/

Posted by OccultBlackMetal at 7:06 PM No comments: 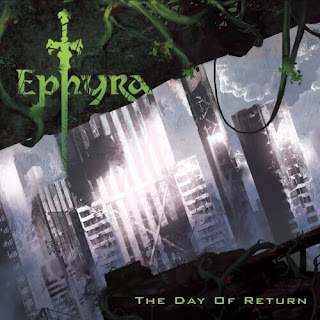 Ephyra  takes  folk  metal  and  mixes  it  with  the  melodic  sides  of  black  and  death  metal  to  create  a  sound  of  their  own,  the  production  sounds  very  professional  while  the  lyrics  cover  Medieval  Fantasy,  Warriors  and  Battle  themes.

http://volcanopromotion.wixsite.com/ephyra
Posted by OccultBlackMetal at 9:01 PM No comments: