1.For those that have never heard of you before, can you tell us a little bit about the band?
Alex:  We basically started at the beginning of 2016. We have all known each other for years. Bon, our guitarist, of course has Lamentations of the Ashen, which is his one-man black metal project with several releases out.  Him and I had bounced around the idea of doing something together, be it a live incarnation of Lamentations or a doom band that we dreamt up several years ago that just never coalesced. Our drummer Roman is one of the main promoters in Albuquerque, where we are from, and so I had known him for awhile because he used to book bands that I was in previously, and I have been on friendly terms with him just from seeing him at the venues that him and I work at.  One night while at some show, I asked him "when are you and Bon and I gonna do something?", and he told me that actually he and Bon had plans to jam the following week, and told me I should come down.   So the next
week we all met up in a rehearsal space that Bon had downtown, and along with a guy named Ben on bass, we began to work on the songs that would become "Fallen to Incarnadine Loam" and "A Wretched Offering". Roman and Bon already had the riffs somewhat put together, and so after hearing them once I just picked up a mic and did the thing.  Ben didn't last long as the bassist - in fact he was let go after a piss poor performance in the studio while the band was laying down the first three of the five songs that make up the album.   I was still only doing vocals at that time, and so Bon played the bass tracks on those songs. After that first studio session, we played several shows; a couple with a guy named Randy on bass, and one with no bass player at all. After that show it was decided that I should go ahead and play bass, so I camped out in my garage for a couple of weeks learning how to do vocals and play bass at the same time in preparation for more shows that we had booked, and the second studio session in which I played bass.

2.Recently you have released an album, how would you describe the musical sound that is presented on the recording? Alex:  Doom. Sludge.

3.According to the fb page you refer to your music as 'high desert doom', can you tell us a little bit more about this term?
Well we are based in Albuquerque, New Mexico. It's a high desert climate, so basically a desert, but at altitude, so thankfully densely wooded forests and superb mountains aren't far away. Doom is a pretty broad spectrum; Celestiial is quite a bit removed in sound from Black Sabbath. Trouble is very different from Mournful Congregation. However all of those bands could be called doom bands and our style fits in there somewhere.

4.What are some of the lyrical topics and subjects the band explores with the music?
Alex: I wrote the lyrics to all of the songs except "Lingers The Taolith", which were penned by Bon. I would say the overall lyrical theme could be tied to personal tragedy . Not made up shit like "oh, my feelings are betrayed amongst the mire and I just can fathom going on".  More like real life family members being torn apart from each other by someone else's act of betrayal, revenge, etc. Stuff that actually hurts that I can't shake.  That's really just one song, though ("A Wretched Offering"), but it's always the first one that comes to mind when I think about the lyrics that I've written.  In addition, we have songs that touch on esoteric themes, things that pop in my head while I'm driving,  esoteric topics, psychoanalytical themes, and "exchanging slavery for freedom" to pull a quote from "If Hope Conspires Against Us".

5.What is the meaning and inspiration behind the name 'Jagged Mouth'?
Bon: The band name is something I thought up one night when I was listening to metal and riding my bike. It's a description of a scowling gateway through broken glass, into a void.

6.What are some of the best shows that the band has played so far and also how would you describe your stage performance?
Alex:  We have had the privilege of opening for Monolord, Goya, Chvrch and some others but for me personally, the highlights so far would be playing with and forming alliances with distances from Albuquerque and The Stalk from El Paso, Texas. Words of encouragement and respect from peers goes a long way with me.
People have come up after our shows and told me that they can tell our music is deeply personal, and it is. It is for the three of us on different levels. Our stage performance is us just plugging in and playing these songs that we've come up with, with whatever occurs doing so naturally. It creates its own vibe that people either walk away from or choose to immerse themselves in.

7.Do you have any touring or show plans for the future?
Alex:  I'm glad to say that we do. We have a 2 week tour lined up for late October and early November with Ol' Dagger from Santa Fe, New Mexico. We will be hitting towns in the western US, and playing with bands that we enjoy and are looking forward to getting to know such as North, Scalafrea, Brume and Catapult The Dead.

9.On a worldwide level how has the feedback been to your music by fans of black, sludge and doom metal?
Alex:  We are a very new band, and are honored that people have been purchasing the digital version of "Louring" from many locations around the world.  Absolutely honored. We all listen to music all the time, and I'm sure you and your readers can relate that when you're hanging with friends and you want to show them something new that they haven't been exposed to before, that Jagged Mouth would be a part of that is amazing. Also, sometimes people look for a band or an album that just reaches them on a level that they need at that exact moment in time. If we could do that for someone, that would be a privilege beyond measure.

10.Where do you see the band heading into musically during the future?
Alex:  Hard to say. We haven't really discussed it. But we never really discussed any of this.  It just happened. Our future songs will be slow and heavy, that is for sure.

11.What are some of the bands or musical styles that have had an influence on your music and also what are you listening to nowadays?
Alex:  I think it's safe to say that we have taken no direct musical influence from any band or group of bands. I listen to a broad spectrum of music, but doom and sludge have always held a special place in my heart, and of course those are the two genres that people affiliate Jagged Mouth with. Bon and Roman listen to a ton of doom and stoner bands, and so the songs that we came up weren't forced by any means. Bon had these riffs and we just added nuances to and came up with the songs. It was relatively easy for us to get the vibe and understand the direction of how things needed to go. You either get it or you don't.

12.What are some of your non musical interests?
Alex:  Hiking. Camping. Boobs.

13.Before we wrap up this interview, do you have any final words or thoughts?
Alex:  Thank you for the opportunity. Underground music is usually only propagated through underground channels, and we applaud your effort. Keep it up.

Posted by OccultBlackMetal at 3:22 PM No comments: 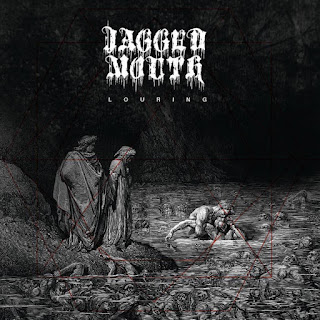 Jagged  Mouth  plays  a musical  style  that  takes  black,  doom,  sludge  and  stoner  metal  and  mixes  them  together  to  create  a  sound  of  their  own,  the  production  sounds very  powerful  for  being  a  self released  recording  while  the  lyrics  cover  dark  themes.

Posted by OccultBlackMetal at 6:03 PM No comments: