Will Of The Ancients Interview


1.Can you give us an update on what is going on with the band these days?
We released “To Our Glorious Dead” digitally in October. Shortly after we struck a deal with PRC MUSIC. They are going to release the album in late February.
2.How would you describe the musical sound of the new album?
The album is based in melodic black metal, but encompasses lot's of different metal sub genres, it is VERY grandiose and epic sounding.
3.What are some of the lyrical topics and subjects the new release explores?
Most of the lyrics, although varying in topics, have a Canadian theme. two of the songs are based on Canadians role in WW1

4.What is the meaning and inspiration behind the name Ill Of The Ancients?
Our original singer was big into the occult. I know it had something to do with that. Otherwise we all at the time thought it sounded cool.

5.What are some of the best shows that the band has played over the years and also how would you describe your stage performance?
Opening for Finntroll and Moonsorrow was pretty awesome. The place was packed even for us which was really cool. Also playing Heathen Crusade 2 back in 2007 with Bal Sagoth, Rudra, Skyforger and a whole slew of other cool bands was awesome.
Our stage show tends to be no nonsense. We get up there and rock the tunes out hard, no gimmicks. We let the tunes speak for themselves.
6.Do you have any touring or show plans for the future?
We are currently planning a small tour for march in the Ontario/Quebec area.
7.On a worldwide level how has the feedback been to your music by fans of melodic  black metal?
Pretty positive! You get some trolls here and there but that's metal.

8.What is going on with the other musical project these days?
All the guys in Will of the Ancients are also in Blastomycosis, a brutal death/gore grindish band. That is sort of on hiatus for now.

9.What direction do you see your music heading into on future releases?
The stuff we are writing now is leaning towards a blackish thrash sound. Though we always tend to incorporate a lot of styles in our music. I'd expecting it go get more extreme. Faster, slower, heavier, lighter.

10.What are some bands or musical styles that have influenced your newer music, and also what are you listening to nowadays?
Metallica, Iced Earth, In Flames, Amon Amarth, Old Man's Child, Emperor, Windir, Nevermore , Slayer have been a huge influence on me personally.
Right now im digging Skeletonwitch, Amon Amarth, Rudra
11.Outside of music what are some of your interests?
Beer, video games and food.

12.Any final words or thoughts before we wrap up this interview?
Grab “To Our Glorious Dead” through PRC MUSIC!

Posted by OccultBlackMetal at 10:12 PM No comments: 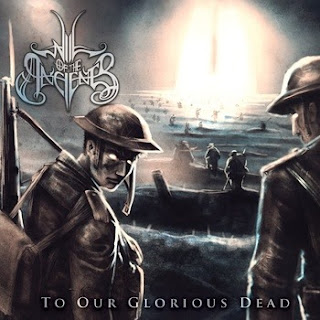 Song  lyrics  cover  dark  and  violent  themes,  while  the  production  has  a  very  strong,  powerful,  heavy  and  professional  sound  where  you  can  hear  all  of  the  musical  instruments  that  are  present  on  this  recording.

http://prcmusic.bandcamp.com/album/dooms-day-the-devils-eyes
Posted by OccultBlackMetal at 9:40 PM No comments: