1.Can you give us an update on what has been going on with the band since the recording and release of the new album?
boris: well, the release was set on the 14th of november, not that long time ago.
we had the release party with timeworn and pandemi the 22nd; we had a lot of fun and it looked like we were not the only ones, eheh!
now, we are focusing on getting rid of some days off for a forthcoming tour, in january.
except that, jamming at the practice place, as always.


2.So far this year you have been a part of a split and have also released a full length, how would you describe
the musical sound of the newer music and also how does it differ from the stuff you have released in the past?
well, as the time passes by, i personally see our first album, the ecstasy of devastation, as a statement and we've been digging deeper in the directions presented on it. that's a totally non objective thought that appeared to me recently; then, take it as it is, eheh!
it also feels like we got angrier on that last album. and we manage to end up with a general sound on "persistent murmur of words of wrath" that reflects quite well this anger and the hystery of hombre malo. nice.

3.What are some of the lyrical topics and subjects the band explores with the newer music?
nacho: We have been writing lyrics like personal stories for a while. In "Persistent..." the comment about social issues overtakes and becomes the main theme. Things like homophobia, the rise of conservatism and this rebirth of religion all over the world have become a matter of concern for us. And also this exagerated consumption in the western world, and specially in countries like Norway. Quite sure we don't need to convince many among our audience, but  all of this pisses us off and we needed to put it into paper and notes.

4.I know that the band name means "bad Man" in Spanish, how does this name fit in with the style of music that you play?
boris: i don't know; does it fit? we still could be playing some spacy electronic music and be called hombre malo too, no?

5.What are some of the best shows that the band ha splayed over the years and also how would you describe your stage performance?
russia has always been our favorite place to play, especially moscow; so intense there!
spain and czech republic are also on top of the list. valmiera in latvia has also this amazing abandoned building that got turned into an art space... fantastic spot and crowd.
a show is some kind of a transe where you hope everyone will join in and create commonly that huge amount of energy made of sweat, sound, passion, fun and relieves. sometimes, it works, sometimes, it doesn't, but if our t shirts aren't wet when we get out of stage, we missed something.


6.Do you have any touring or show plans for the future?
the closest will be this 2 weeks tour in january i mentioned earlier with jack and the bearded fishermen from france; we'll go to denmark, germany, netherlands, belgium, uk (first time for both bands!) and france.
it looks like we'll spend some days with khmer in scandinavia early april too.
then, there will be tours in 2015; be sure we'll visit you this year! we'll let you know on time.
when it comes to the usa, japan, australia, w'd love to go there; but we need to find a way so we won't loose millions of dollars! any help on that side would be more than welcome.

7.Over the years you have been on a few splits, out of all the bands you have worked with on these albums,
which one do you feel came the closest to your musical style?
we shared records with jack and the bearded fishermen, desert icons and sofy major; if you add hombre malo to the list, you end up with 4 very different bands with 4 very different styles of music. but if i really have to pick up one, i'll take jack and the bearded fishermen because of their fuzz sound on their early records.


8.The new album came out on Disciplin Media, can you tell us a little bit more about this label?
disiplin media is run by stian who used to play in bands like Englemaker, Eskatol and Betonglbarn.
the same day our last album got released, disiplin media released also the first album of timeworn. and there is a beautiful reissue of a great norwegian band, kort process, coming in 2015... you can get all the infos at http://disiplin-media.com


9.On a worldwide level how has the feedback been to the newer material by fans of underground music?
the thing is that we had A LOT of feedbacks this time, mainly because of disiplin media and stian who's been working his ass off in promoting that album.
all in all, feedbacks have been really good; people seems to see a strong unity/connection when it comes to the entire record listening experience.
nacho's work on linking the songs with samples, noises and the timing have a lot to do with that, i think.
but weird in an other way because some of those riffs are 4 years old and some are new...
but i do think that you can't get hombre malo by listening to one or two songs. so we like that they get the guideline through all of this noise wrapped up in 7 songs.


10.What is going on with some of the other bands or musical styles these days that some of the band members are a part off?
joakim, the drummer, is actually on tour in japan with his band ich bin n!ntendo and i know he'll go on tour in february with his other band, moe.
i don't know what's going on with jesuismort, nacho's band; but i guess we'll hear about that soon.
tom still have psalm from time to time.
okkultokrati, my other band, just released an album last july; we came back from a european tour plus some gigs in norway; now we are resting a bit.

11.Where do you see the band heading into musically during the future?
i could answer that question but this wouldn't end up the way i said; we are 4 very different persons. this would only be my thoughts and they will be "twisted" by the others on the way so it won't look like the initial ideas.
but, as i said earlier, there are faces of hombre malo that only us know and i hope they'll end up twisted live or on records one day.

12.What are some of the bands or musical styles that have had an influence on your music and also what are you listening to nowadays?
i think that hombre malo has its roots in the diy/hardcore movement; but there is no boundaries when it comes to create music with this band; we never set any. i could read recently some reviews about the new album and people were speaking about noise rock, sludge, psychedelic, post rock, even grunge... sure, we can relate to all of that.
right now, on the lp player, the greek band aphrodite's child is playing. just before was the swedish band walk through fire...

13.What are some of your non musical interests?
in hombre malo, you have carpenters, bar tenders, roadies, drivers, fathers, surfers, book readers, sailors, swimmers, travellers, dreamers...

14.Before we wrap up this interview do you have any final words or thoughts?
thanks for reading and hopefully, we'll come and play to a place near you soon; that day, whatever day of the week it is,
come and join the celebration! because that's where it really happens.

Posted by OccultBlackMetal at 1:07 PM No comments: 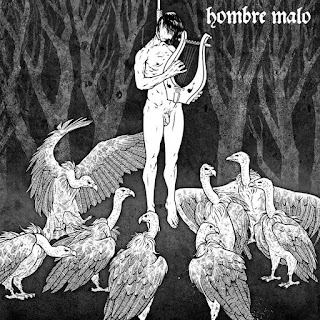