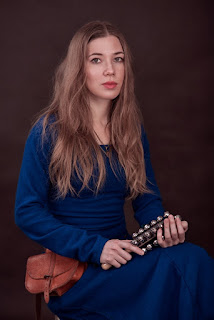 For those that have never heard of you before, can you tell us a little bit about the band?
Hi. Well, Pereplut is folk-metal band from Siberian town called Tomsk, Russia. The band was founded in 2011. We play brutal and in the same time cheerful folk-metal. At the moment we have released one mini-album and one full-length album.

How would you describe the musical sound that is presented on the recordings?
Our sound is formed by electric instruments, such as guitar and bass, and acoustic folk instruments, such as bagpipes, flute, violin, hurdy-gurdy, cello and others. We try to balance between different styles of metal, first of all thrash metal and heavy metal mixed with folk tunes and melodies.

3. Your lyrics cover folk tales, paganism, mysticism, and anti Christian themes, can you tell us a little bit more about your interest in those topics?
We are really interested in Slavonic folklore and history, because it’s very important to know your roots, we think. Also we don’t’ like the Christian lie that there was not any culture before the baptism among the Slavs, their hypocrisy and greed which aren’t inconsistent with their religion, and their attempts to cancel some metal gigs in Russia. Also there are a lot of plots in traditional Russian folk tales connected with amoral behavior of pops. So that’s why we use these themes in our songs.

What is the meaning and inspiration behind the name 'Pereplut'?
Pereplut is a god from the pantheon of the Slavs. There is no a lot information about Pereplut in the annals. We know exactly that people praised Pereplut with round dances, as people at our concerts do.

What are some of the best shows that the band has played so far and also how would you describe your stage performance?
We gave a lot of concerts. The best ones were our performances at Horned Folk Fest and Metal Hail Fest.

Do you have any touring or show plans for the future?
Yes. This summer we are going for some regional fests. Then in autumn we want to go on a small tour in support of the released album. Then we would like to release a single, and closer to the summer of next year we are going to release the second full-length album.

Currently you are unsigned, are you looking for a label or have received any interest?
At the moment we are unsigned, but we are going to send our demos to major labels to be signed.

On a worldwide level how has the feedback been to your music by fans of folk metal?
We got the feedback from different countries, France, Brazil, Ukraine, USA, Serbia, Japan.
Some of these people buy our album from BandCamp, some of them order our СD by post, our fan from Serbia even makes fan videos on YouTube. We are really grateful to all of them.

Where do you see the band heading into musically during the future?
Perhaps we will expand the arsenal of folk instruments. We will also use some elements from different styles of metal.

What are some of the bands or musical styles that have had an influence on your music and also what are you listening to nowadays?
All of us were influenced by classical rock, punk and metal bands. In these latter days we listen bands playing in the genre related to our music such as folk metal, pagan metal, black metal.

What are some of your no nmusical interests?
We don’t have a lot of time for nonmusical hobbies or interests. Most of us have jobs and families. If talk about every single member: our guitarist Eugene is interested in European history and folklore and goes to the gym. Dmitry (flutes) likes PC games, also he had been engaged in airsoft before he came to the band. Vyacheslav (bass) is engaged in wood carving. Alexander (vocals) is also interested in history and folklore, before he came to the band he had been a football fan. Ivan (drums) is interested in politics. Also Eugene, Alexander and Ivan play in heathen metal band Lutowrat.

Before we wrap up this interview, do you have any final words or thoughts?
Thanks for the exciting questions and interest to our band. We hope to see your readers at our concerts) 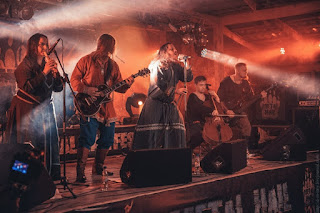 Posted by OccultBlackMetal at 10:26 AM No comments: 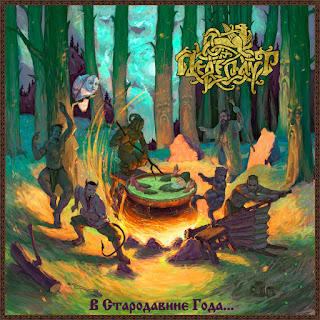 Pereplut  plays  a  musical  style  that  is  mostly  rooted  in  pagan  and  folk  metal  while  also  mixing  in  the  heaviness s of  black,  death  and  thrash  metal  to  create  a  sound  of  their  own,  the  production  sounds  very  professional  while  the  lyrics  are  written  in  Russian  and  cover  folk  tales,  paganism,  mysticism,  and  anti  Christian  themes.

Posted by OccultBlackMetal at 7:38 PM No comments: