1.For those that have never heard of you before, can you tell us a little bit about the band?
Suppressed is 5 guys from Umeå, Sweden that combine sludgy metal with a lot of noise. We've been together as a band since 2018 but as individuals we have played in various punk, death and black metal bands since the 90's.


2.So far you have released a demo, can you tell us a little bit more about the musical style you went for on the recording?
We wanted to get it really sludgy, almost off beat sludgy so we recorded the songs live. Only vocals were done afterwards. We aimed to give Gurgels noise a bit more room than most sludge bands do. I want to make it clear that the noise is not there as an occational distortion. It's supposed to be threatening almost all of the time. Due to the noise's nature it's really hard to get it right, so I'm very satisfied with the outcome.


3.What are some of the lyrical topics and subjects you have explored so far with your music?
Basically every days struggle being a wage slave and the constant boredom of capitalism. Also the shame one feel, looking at an ongoing environmental disaster and not acting out on it.


4.What is the meaning and inspiration behind the name 'Suppressed'?
It's the constant feeling when living in the worlds "best" country where everything is a charade. Yeah sure we have it all. We should be satisfied. But we're all living at the expense of the climate and underpaid workers far away. They suffer so we wont have to.


5.Can you tell us a little bit more about the artwork that is presented on the demo cover?
The world is on fire and soon we'll burn too, unless drastic counteractions are taken.


6.What are some of the best shows that the band has played so far and also how would you describe your stage performance?
We've only yet had a couple of local shows but they've been great. We usually place Gurgels noise table in front of us all so he can really beat it out. I on the other hand often forget about the bass rhythms because it's overwhelming to finally scream it all out.


7.Do you have any touring or show plans for the future?
We've got a few requests upon releasing the demo so we'll soon play in Stockholm and Gothenburg. Would be great to do a tour in Europe one day.


8.Currently you are unsigned are you looking for a label or have received any interest?
We've gotten a few interesting emails but we are in no stress to sign yet. It has to be a label that really understands the music and what we want to do.


9.On a worldwide level how has the reaction been to your music by fans of underground metal?

We've gotten a few reviews that have been mostly positive. But we've just started so there is not much of a buzz yet.

10.When can we expect a full length and also where do you see the band heading into musically during the future?
We're currently writing new songs. If all goes well we aim to head into the studio again this fall. For our upcoming album we aim to make uglier and more hardhitting tunes. We definitely wan't to step it up.


11.What are some of the bands or musical styles that have had an influence on your music and also what are you listening to nowadays?
Sludge and black metal have inspired us the most. Bands like Abandon, Indian, Starkweather and Primitive Man have all gotten me here.


12.What are some of your non musical interests?
Besides being a father of three children... there is not much time. But I take interest in political literature which helps me coping with also working inside the capitalist machinery. Mouffe, Arendt and Zizek are all highly recommended to stay afloat.


13.Before we wrap up this interview, do you have any final words or thoughts?
Thanks a lot for spreading our music. We recommend anyone interested in the ugliers side of metal to give a listen. We'll soon print shirts and also release the demo on CD so follow us on Facebook and Bandcamp to keep track. Stay underground!

Posted by OccultBlackMetal at 9:00 PM No comments: 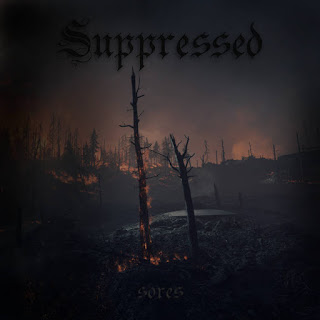 Suppressed  plays  a  musical  style  that  takes  black,  sludge,  funeral  doom  metal  and  harsh  noise  and  mixes  them  together  to  create  a  sound  of  their  own.  The  production  sounds  very  powerful  for  being  a  self  released  recording  while  the  lyrics  cover  nihilism  themes.