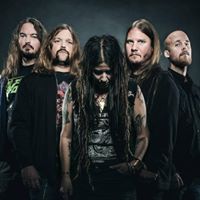 1.Can you give us an update on what has been going on with the band since the recording of the mew album?
Pontus: Since the recording, we haven't done so much musically. We did a few shows and spent time on the artwork and such. It's a limbo-like situation, having the new album recorded but not being able to present it to the world yet!

2.You have a new album coming out this month, how would you describe the musical sound that is presented on the recording and also how does it differ from the stuff you have released in the past?
Pontus: It's hard to describe your own music, but to put it simple: I think it's a very good sounding and epic metal album with progressive influences and a crusty backbone. Lots of dynamics and emotions. Words doesn't do it justice, however, as with all good music! Compared to our earlier stuff, I think this is our most fully realized album in terms of songwriting, emotional dynamics, and aural impact.

3.This is your first album in 5 years, can you tell us a little bit more about what has been going on during that time span?
Christina: I have opened a vegan restaurant with some friends, made songs and played a lot of shows with my other band Contorture. Most of us are busy with other bands when we dont do Agrimonia things.
Pontus: With Agrimonia, we've done a few tours and shows. Then we've been busy with other stuff, both musical and non-musical. The rollercoaster that is life!

Christina: I tend to write about injustices in the world, big and small things that happens around me and about things I think is wrong in the world. It can be social issues or mistreatment of the earth and the people living in it.

5.What is the meaning and inspiration behind the name 'Agrimonia''?
Christina: Agrimonia is a plant and has a long history of medicinal use. It has been know as an an "all-heal" and has been used to heal everything from wounds to liver problems and also as a witch's cure. When we started Agrimonia we just liked the name and didn´t really have a meaning behind it.

6.What are some of the best shows that the band has played over the years and also how would you describe your stage performance?
Christina: I get really into the songs when we play so I dont think I have a plan of my stage performance. I just go with the music and the words. I think we all have different ideas of the best shows we played and so much can be included in that question. It is hard to answer! I really like playing places where I have friends in the audience.
Pontus: I enjoyed the release show for the last album, where we played the whole album from start to finish live. To me, a great show is when the energy is shared between us and the audience. As for stage performance, that is something I don't think we've ever thought so much about. For me it's finding that energy and connection to the music.

7.Do you have any touring or show plans once the new album is released?
Christina: We have a release party planned here in Göteborg on March 23:rd.
Pontus: I will be on paternal leave until the fall so we won't tour until then. We'll see what happens!

8.On a worldwide level how has the feedback been to your music by fans of black, sludge and post metal?
Pontus: It's been good.  We've been fortunate enough to play a lot of places with great receptions. Reviews, especially for this new album, are really nice!

9.What is going on with some of the other bands or musical projects these days that some of the band members are a part of?
Christina: I play bass in a d-beat band called Contorture. We are currentle working on our second full lenght album and we are recoring it at Studio D-takt in Uppsala at the end of March. We are also heading out on a tour of eastern and south eastern Europe in March.
Pontus: Me and Björns other band Miasmal is slowly getting back on track since we got a new bass player a few months ago. Martin is very busy with At the Gates, they just recorded a new album and will probably do a lot of shows this summer when their new album is out.

Pontus: I'd like to think we will not stray far from our core sound, but rather evolve it.

11.What are some of the bands or musical styles that have had an influence on your music and also what are you listening to nowadays?
Christina: I think that a band that we all can agree on is Bolt Thrower. Personally as a singer my influences has been women who growls in bands, like Agnes from the polish band Lost. I listen a lot to Bolt Thrower, SubRosa, Misantropic, Windhand and JexThoth for example.
Pontus: Bolt Thrower, Sisters of Mercy, Dinosaur Jr, PJ Harvey, Neurosis, early Metallica. Both influences (however subconscious) and recent listening.

12.What are some of your non musical interests?
Christina: I am so busy with work right now so I do not really have so much spare time. When I am not at work I like to relax with a book or a tv-series, have beers with friends or watch a movie.
Pontus: Books, documentaries, family life and beer.

13.Before we wrap up this interview, do you have any final words or thoughts? Christina: Thanks for taking the time to interview us!

Pontus: Cheers and thanks! Check out Awaken!

Posted by OccultBlackMetal at 9:38 PM No comments: 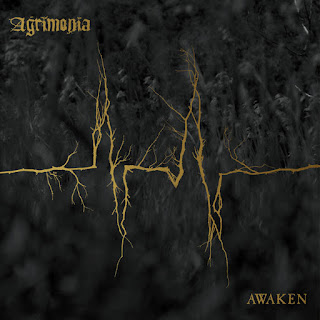 Agrimonia  plays  a  musical  style  that  takes  black,  sludge,  post  metal  and  grindcore  and  mixes  them  together  to  create  a  sound  of  their  own,  the  production  sounds  very  professional  while  the  lyrics  cover  dark  themes.

Posted by OccultBlackMetal at 11:48 PM No comments: