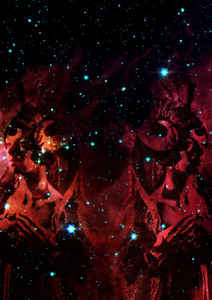 Wyrm are a 1 man band from Texas that plays a mixture of drone/doom metal and black metal and this is a review of their 2011 album "Paramount" which was released by Drowning Productions.

Drums and bass guitar are absent from the recording with the music being all guitar noises, while the keyboards bring a very dark and ambient sound to the music as well as some kraut rock and experimental influences.

Rhythm guitars are all riffs and distortion effects which are in the drone/doom metal vein mixed in with some darker black metal influences as well as shoegaze, in addition the songs are very long and epic sounding.

Vocals are absent from the music with all of the music being instrumental, while the song themes cover dark themes with one song having an alchemy approach, as for the production it has a very, dark, raw and primitive sound to it.

In my opinion Wyrm are a very great sounding drone/black/doom metal hybrid project and if you are a fan of this style, you should check out this recording. RECOMMENDED TRACKS INCLUDE "Cursed Ground Above Which Even A Murder Will Not Fly" and "Ouroborous Harpengnathos". RECOMMENDED BUY

https://drowningcc.bandcamp.com/album/paramount
Posted by OccultBlackMetal at 3:47 AM No comments: