1. Can you give us an update on what has been going on with the band since the recording and release of the new album? After we had finished recording “Urkraft“ we continued with the search of a label to publish the new album. Fortunately, we were lucky and got signed by MDD Records. Moreover, we have been playing a bunch of gigs and are looking forward to playing further gigs to promote “Urkraft“.

2. Recently you have released a new album, musically how does it differ from the stuff you have released in the past? Firstly and without a doubt, there has been a musical development in terms of playing our instruments as well as composing. In our opinion the songs sound much more mature than the previous ones. Secondly, we tried to include more catchy melodies and added clean vocals as well. But despite all progression we still try to stick to our own unique style.

3. This is your first release since 2014, can you tell us a little bit more about what has been going on during that time frame? Quite a lot has happened since 2014. Of course we have to mention the songwriting-process first which took quite lots of time due to private occurrences. Furthermore, we extended our live presence which culminated in our biggest show so far at Ragnarök Festival and our first gig abroad. Besides, we moved into another rehearsal room and switched to a new recording studio for “Urkraft“ (Soundbath Studio, owner: Travos/Thormesis).

4. Your lyrics cover Norse and Germanic Paganism, can you tell us a little bit more about your interest in this topic and also do you have an interest in other forms of paganism? Our singer Manuel who is responsible for the lyrics really feels connected to German neopaganism and developed an interest for old tales concerning this topic. That's why he's keen on handing this knowledge down to our listeners.

5. You also cover Franconian history with your lyrics, can you tell us a little bit more about this topic? Every member of Delirium is interested in the history/tales/sagas of our Franconian homeland.What contributes to this interest is the fact that on the one hand almost every Franconian village has its own history/tales/sagas and on the other hand these old customs are still present to some extent. What also contributes is a strong Franconian local patriotism ;) (meant in a positive way; not to be confused with any right-wing bullshit!). With our music we simply wish to counteract the oblivion of Franconian history.

6. What is the meaning and inspiration behind the name 'Delirium'? Believe it or not but our band's name doesn't have a specific, deep meaning. Actually the band was founded in a beery mood, in Delirium so to say. Nevertheless, this name fits us perfectly because we really enjoy partying intensely ;)

7. Can you tell us a little bit more about the artwork that is presented on the album cover? Well, there's really not that much to tell. The cover shows a Franconian warrior who occupies the “Urkraft“ (meaning elementary power or primal force by the way). We had some ideas concerning the cover and finally found an artist who implemented our ideas. That's it.

8. What are some of the best shows that the band has played over the years and also how would you describe your stage performance? To begin with, we had a lot of fantastic shows but there are two that really stuck out. The first one was our gig at the 2015 Ragnarök Festival. Playing there had always been a dream of us ever since our foundation so it absolutely was a dream come true. The show was totally insane because over 1,000 people showed up, something which we had never expected. The second one was our first gig abroad which took place in South Tyrol so we can say we actually played in Italy. The first gig in another country is very special for every band, isn't it? Describing our stage performance is something we have never been asked before. We would characterize it as a full power, straight-in-your-face kind of live performance, raw and direct. We always try to both have a good time on stage and party with the people in front of the stage. Come to one of our shows and see it for yourselves ;)

9. Do you have any touring or show plans for the future? In the future we want to extend our live presence and play more shows, especially at festivals. Due to private issues such as family or job it is unfortunately rather difficult to plan tours.

10. On a worldwide level how has the reaction been to your music by fans of pagan metal? To be honest, we have no clue at all. Really, we can't judge that. The only thing we can say on this topic is that we have shipped CDs worldwide, e.g. to Canada. Maybe that is a hint on whether we are appreciated by the worldwide (pagan) metal community?!

11. Where do you see the band heading into musically during the future? We always want to advance or enhance musically and establish our style. What also floats in our heads is a concept album sooner or later.

12. What are some of the bands or musical styles that have had an influence on your newer music and also what are you listening to nowadays? We get inspired by pretty much everything, may it be Black Metal or Classic Rock. Lots of inspiration comes from our circle of acquaintances, particularly by the people who also play music. Within the band everybody has his own preferences so we never lack new influences. What's also beneficial is the fact that we don't set any musical boundaries when it comes to composing our music.

13. What are some of your non musical interests? Family and friends, sports, enjoying nature and, as already mentioned, partying ;)

14. Before we wrap up this interview, do you have any final words or thoughts? Well, we would like to say thank you for this interview of course. We hope the people will like our
new album and hopefully we see some of you at one of our future shows.

Posted by OccultBlackMetal at 5:45 PM No comments: 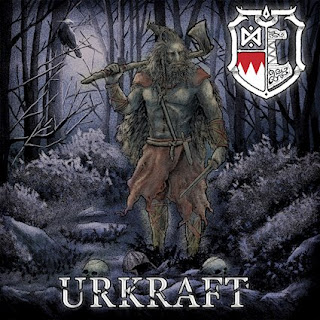 Clean  pagan  vocals  are  also  brought  into  some  parts  of  the  music  while  one  track  also  introduces  spoken  word  parts  onto  the  recording  and  as  the  album  progresses  a  brief  use  of  clean  guitars  can  also  be  heard.  The  production  sounds  very  professional  while  the  lyrics  are  written  in  German  and  cover  Franconian  History,  Nordic  and  Germanic  Paganism  and  Mythology  themes.

Posted by OccultBlackMetal at 5:10 PM No comments: