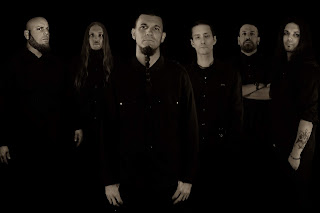 1.For those that have never heard of you before, can you tell us a little bit about the band?
1. Immanifest technically began conceptually in December of 06. Asgrim had I (Anton) had both been session members in a band (keyboards for Royal Anguish) and we grew to admire
each other's work. Asgrim was the mastermind of a band I basically worshiped in my teens known as Yeti. In 2006 I was working at Sam Ash Music and I remember listening to the
Revelations in Darkness demo in Asgrim’s truck and feeling inspired to start a band. From there we wrote 5 songs and named the band Immanifest in 08.

2.In November, you have your first full length coming out, musically how does it differ from the ep you had released in 2010?
2. Macrobial features some music that was originally supposed to appear on the Qliphotic EP and also tracks written afterwards. I'd say each song has its own identity. None of us would
consider the album any particular style other than Extreme Metal – an amalgamation of many different styles. Perhaps we just took some elements that we had began to experiment with
on Qliphotic even further this time around. We don’t rely on technique as a means to an end,but rather employ techniques in expressing the songs.

3.This is also your first release in 9 years, can you tell us a little bit more about what has been going on during that time frame?
3. Hiatus. Non – band related.

4.In the press release you mentioned that the lyrics are inspired by the works of Michael Tsarion whoe in turn is infleunced by the works of John Dee, can you tell us a little bit more about the songwrting that is presented on the new album?
4. Tsarion is most certainly a major influence. Basically, he describes how a 16 th century black magician Dr. John Dee (Mathematician, astronomer and council to Queen Elizabeth I)
established ritual contact with extra-dimensional beings. It’s a classic demonic evocation ritual story but gives it a ‘scientific’ depth when the nature of such entities are explored. Tsarion
called them “Macrobes”. Thus Macrobial is an exploration of this theme- a deal with devils –exchanging blood for power and knowledge. Some tracks, lyrically, explore the theme of
Global Wars acting as strategically planned mass blood rituals – the pain and horror released into the ether, siphoned off by Macrobial parasites.

5.Your also go into the concepts of ultraterrestial's and astral travel, can you tellus a little bit more about your interest in the paranormal and metaphysical topics?
5. The term Ultraterrestrial denotes the concept of a divergent timeline – for the concept of free will to be ultimately true, all possibilities of every infinite divergent timeline (or worldline)
must exist somehow in the universe – perhaps enfolded, and then unfolded when navigated or chosen. For a sci-fi example- Dinosaur-Humanoids evolving out of the Mesozoic era,
developing advanced space and time displacement technology and then exploring our timeline. We would meet as Ultraterrestrials.

In regards to Metaphysics, there is much that can be said of our interest in such a topic, but to quote the father of atomic theory Max Planck “I regard matter as derivative from
consciousness.” The key to connecting it all- the one thing that makes up the majority of the universe and even the atom – space. Within the seemingly empty space that constitutes the
fabric of existence might lay a multitude of dimensional realities.

6.Some of your other lyrics mention Nifelheim, Egypt and Jahbulon, a name that is mentioned in Freemasonry, how did you get interested in the various forms of occultism?
6. Interest in occultism was sparked by David Ickes work in the late 90s, specifically “The Biggest Secret”, and from there Jordan Maxwell whom took inspiration from his connection to
Manly P. Hall (writer of The Secret Teachings of All Ages). The term ‘Occult’ means hidden or obscured – and largely in my experience there is much to history and reality that is obscured
either purposely perpetuated by oligarchies or naturally lost to time. A burning desire to understand reality and existence therefor necessitates a study of the occult.

7.What is the meaning and inspiration behind the name 'Immanifest'?
7. The inspiration for our band name comes from Dr. David R. Hawkin’s work entitled ‘The Eye of the I’. Described as the “Unmanifest” formless ground of being in which all of dualistic
reality arises from.

8.Can you tell us a little bit more about the artwork that is presented on the new album cover?
8. The cover art for Macrobial is a nightmarish re-envisioning of the 6th Tarot Card – the Lovers. This card denotes many things, including the bond between flesh and lust – but also
of life, union and spirituality. Our interpretation is an inversion of that – what we feel represents the world more accurately in the age of Kali Yuga – the suns elliptical journey
furthest from galactic center – the galactic winter.

9.What are some of the best shows that the band has played over the years and also how would you describe your stage performance?
9. The most memorable shows were probably opening for Tyr and Korpiklani in Tampa and then in Ft. Lauderdale with Kult ov Azazel. The crowds were extremely enthusiastic and
supportive. We are a six piece so I think the size of the band brought a bigger presence – not to mention our front man Eric carries with him an ominous and foreboding vibe. We have not
yet performed with our second vocalist but we think that would bring things to the next level,for sure.

10.Do you have any touring or show plans once the new album is released?
10. No plans currently – but not ruling anything out.

11.On a worldwide level how has the reaction been to your music by fans of black, death and symphonic metal?
11. Any fan of extreme music is a friend of ours. We’ve made friends/listeners from Canada to Europe to South America to Malaysia. We all speak different languages but the music bonds
us. We flirt with different styles of metal but Symphonic Black/Death Metal is what we do – we feel like there are less rules there – which is critical in breaking limitations and exploring
creatively. Fans of that style tend to be cognizant of this, and we dig that.

12.What is going on with 'Shadow Society' these days, a band that shares a lot of the same members?

12. Shadow Society releases a new EP next year and will follow that up with live shows.
They are working on some cool multimedia content as well – 2020 definitely their year.

13.Where do you see the band heading into musically during the future?

12. Shadow Society releases a new EP next year and will follow that up with live shows.
They are working on some cool multimedia content as well – 2020 definitely their year.

14.What are some of the bands or musical styles that have had an influence on your music and also what are you listening to nowadays?
14. We are lovers of Metal in general – so many amazing bands from our home state and abroad. Without beating a dead horse – obvious influences are Late 90s/Early 00’s Cradle of
Filth and Dimmu Borgir (what we would call their “Nick Barker” era) Old Man’s Child, Dissection, At the Gates, Dark Funeral. Listening to Borknagar’s True North and revisiting my
Naglfar discography currently.

15.What are some of your non musical interests?
15. We are all nature lovers. A lot of boating and water sports here in sunny Florida. The winters are lovely with many forest excursions and bonfires. We also tend to voyage to
Tennessee yearly to experience the Appalachian mountains.

16.Before we wrap up this interview, do you have any final words or thoughts?
16. Thank you for the interest and thoughtful questions. Ave atque Vale!

Posted by OccultBlackMetal at 2:08 AM No comments: 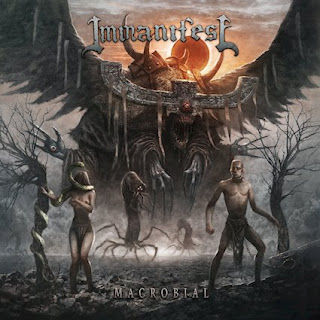 A  couple  of  the  tracks  are  long  and  epic  in  length  along  with  some  of  the  riffing  also  showing  an  influence  of  prog  metal  as  well  as  one  track  also  introducing  clean  vocals  onto  the  recording  and  as  the  album  progresses  a  brief  use  of  female  vocals  can  also  be  heard.  The  production  sounds  very  professional  while  the  lyrics  cover  occultism,  consciousness,  death,  astral  travel  advanced,  and  sequestered  technology,  and  it's  westernization  through  global war  as  a  sacrificial  blood  ritual.

Posted by OccultBlackMetal at 1:56 AM No comments: