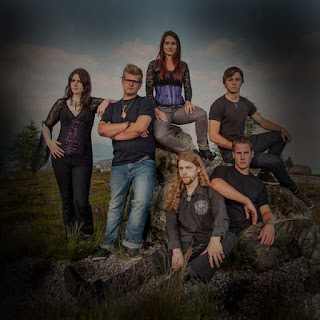 1. For those that have never heard of you before, can you tell us a little bit about the band?
We are a band from Carinthia, Austria, and we combine metal with acoustic instruments just like flutes, bagpipes, accordeon and mandolin. Our melodies are influenced by traditional celtic tunes.

2. Recently you have released and ep, how would you describe the musical sound that is presented on the recording?
While mixing the ep we tried to receive an intimate sound, especially for the acoustic instruments, for example a sound you might hear when you are sitting in a pub and listening to a gig of a folk band. A sound that creates a feeling as if the (flute)player sits direct in front of you. On the other hand we were looking for a big metal sound for drums and guitars with a powerful low end.

3. There is a concept in your lyrics, can you tell us a little bit more about it?
Yes, the ep is following a concept. Most of the songs are dealing with the legend of the germanic priest Veleda. She lived a few decades AD and was an important personality in the Batavian rebellion against the Roman Empire. Veleda predicted the victory of the Germanic people in that war. But finally the rebellion failed and Veleda got arrested. Our songs are dealing with the emotional involvement of different people in this uprising.

4. What is the meaning and inspiration behind the name 'Tagarot'?
“Tagarot” is Old High German and means dawn. When we were searching for a band name we soon decided to choose one in a really old language because we wanted a name that sounds totally different from most band names we usually know.

5. What are some of the best shows that the band has played so far and also how would you describe your stage performance?
Sadly we haven’t played any show yet. Our band formation crashed because of the occupational way some members devided to choose. Know we have a new formation and looking forward to play some shows
6. Do you have any touring or show plans for the future?

At the moment nothing is tangible.

8. On a worldwide level how has the feedback been to your music by fans of folk metal?
Tagarot isn´t very famous at the moment and we have a small fan base. So the world wide feedback keeps within a limit but we have already fans from over 40 countries and we received great personal feedbacks from some guys which makes us really happy.

9. When can we expect a full length and also where do you see the band heading into musically during the future?
Actually we are composing new songs but we haven’t decided until yet if there will be a full length album or a second EP but we can say that we are working hard and trying to improve our skills and learning new instruments to bring our music to the next step.

10. What are some of the bands or musical styles that have had an influence on your music and also what are you listening to nowadays?
Enisferum, Moonsorrow, Nightwish and Eluveitie but also a lot of folk bands such as The Bothy Band, Lúnasa, Caladh Nua and Grada. These are also the bands we are listening to nowadays and many more.

13. Before we wrap up this interview, do you have any final words or thoughts?

Posted by OccultBlackMetal at 11:49 AM No comments: 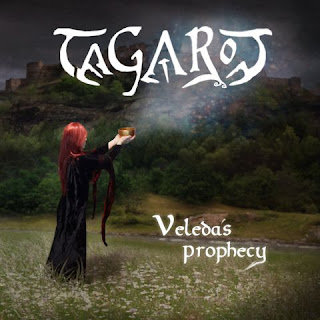 
Tagarot  plays  a  style  of  folk  metal  that  is  very  epic  and  melodic  while  also  bringing  in  the  heaviness  of  black  and  death  metal,  the  production  sounds  very  professional  for  being  a  self  released  recording  while  the  lyrics  involve  a  concept  with  a  Germanic  priestess  and  her  fight  against  imperium  Romanum.