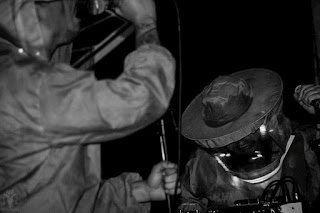 1.For those that have never heard of you before, can you tell us a little bit about the band?
T. This is a tough question to answer as we have tried so hard to keep the band somewhat of a mystery and an enigma. I think it's also an incredibly difficult given the nature of our band and music. I think aside from that we are an extreme metal band based in the south of the UK, it's best if we let the album speak for itself here.

2.In September you have your first full length coming out, can you tell us a little bit more about the musical style you went for on the recording?
T. This isn't only our first full length but our first recording entirely, bar an incredibly DIY live single track demo we put together with the help of our mate Sam. I think the beauty of that is, that there's no real style there whatsoever! Musically we write what we want to write and to play, and try not to box ourselves into genre or any other confining ideas, which is why you will find when listening to the record that (we like to think) the music is constantly changing and evolving to the overall themes within the piece. At heart we are entirely a prog band.


3.Your lyrics cover both science fiction and political themes, can you tell us a little bit more about your interest in those subjects?

T. What we tried to do with Planet Loss as a full piece, was try to highlight the current state of the planet through the use of Sci-fi metaphors and imagery as, if you really look at current world affairs it's ironic how close we are to your classic sci-fi dystopian tale. We have the oppressive, power-driven overlords (some even trying to build sky high monolithic walls), a huge imbalance of wealth and conflict of the people interests spanning the globe, a society so reliant on technology it's actually making us ill. Not to mention this is all happens in a reality where it is supposedly easier to give a huge chunk of the population a pill for their problems and send them on their way rather than work with them, despite the hollow numbness we experience thereafter.

Every so often you'll find a piece of media that does a great job of highlighting the issues half of us don’t even see. George Orwell's 1984 is a great example of this, and in more recent years as does the TV show black mirror. It's incredibly important in this day and age to keep your eyes open, read between the lines and think for yourself. Media such as those we have named do an incredible job of making this point and in a dream world hopefully people will see our album in a similar light.


4.You also mentioned some inspiration from George Orwell, can you tell us a little bit more about your interest in his works?

T. We enjoy a lot of Sci-fi literature such as the works of H.G Wells, Phillip K. Dick and James Herbert (The City is one of the best graphic novels of all time), but Orwell's ability to draw parallels between his writing and real-world political, social and economic issues was definitely an inspiration when writing Planet Loss. "1984" is a powerful piece of literature which resonates with us on several levels and we think that comes across in the lyrics and story we present.


5.What is the meaning and inspiration behind the name 'Wallowing'?

T. Planet Loss is a sentimental album to us for many reasons, but one of the biggest is because of how much truth there is behind the music. As we have said before, this album was made to highlight human errors that have failed society and the world in general, a world that we are a part of and have had to endure as much as anyone else. All of the topics we highlight on the album are things that have affected us as people, and in order to put that across effectively whilst writing the initial drafts for what eventually would become Planet Loss, our minds had to "wallow" in some horrible memories and experiences, so the name seemed natural from the start.

6.Can you tell us a little bit more about the artwork that is presented on the new album cover?
T. The artwork is a piece we commissioned from Luke Oram. His work has always stood out to us for his attention to detail, unique use of colour, contrast and overall style. Not to mention he has worked on cover art for some incredible bands such as Monolithian, Human Future, Iron Eagle & his own  band Atomck to name a few.
The idea behind the cover was to create an image with huge scale to mirror the music, whilst detailing the overall themes behind the story. The foreground shows a group of “Lizard Men” patrolling human slaves, whilst an evil overlord kind of figure looks down over the loading bay of his ship to see hoards of human slaves lined up by these ominous gigantic droid/robotic figures. The “overlord” has two curious, childlike and dependent droids on either side of him in a kind of metaphor to our views on the UK government. There are several metaphors within the piece which mimic metaphors within the music itself.
There is a real retro vibe to the piece which we really appreciate, from the Giger influenced spaceship-interior to the use of colour.

7.What are some of the best shows that the band has played so far and also how would you describe your stage performance?
T. We were fortunate enough to be a part of Cardiff Psych & Noise Fest alongside Ohhms, Cattle & Part Chimp as our first ever show, which was a great opportunity and awesome time  Although admittedly a daunting first ever show, we feel like it went incredibly well! Since then we have been lucky enough to play Dreadfest 2019 alongside WormRot, Rotten Sound - FukPig as well as Creeping Death Fest alongside BONG, & Riffmas Fest in Brighton alongside bands such as Telepathy and Diesel King. We have been very fortunate for a band with limited music and media available!

J. We’ll be doing a run of shows around the album launch. Exact dates & locations still to be confirmed, but we’ll be announcing them as soon as possible. We’ll be looking at sorting out more dates for 2020, obviously, too.

9.On a worldwide level how has the reaction been to your music by fans of underground metal?

J. It’s hard to tell on a worldwide level, yet. We put out a demo for Phosgene a few months ago, and it got a great reception - and things have been going down really well live… but only a select few have heard the album for now - so it’s hard to get an idea of what the reaction will be outside of that!

10.Where do you see the band heading into musically during the future?
T. Musically we are keeping that door wide open. We aren't ones to pigeon-hole ourselves and despite having some rough ideas for new music in the works, there's no telling which direction it'll take just yet. It will be heavy, it will be disgusting and 100% as out there as “Planet Loss”, but we aren't going in with any specific ideas for a specific sound. We are a band who 100% like to feel things out naturally and let our emotion do the talking, so it's all very dependent on where we are in our lives at that specific point. It's real exciting as we are just as clueless as everyone else.


11.What are some of the bands or musical styles that have had an influence on your music and also what are you listening to nowadays?
T. Our influences are incredibly varied but all tend to stem from heavier music. Although saying that, the main ideas behind "Planet Loss" were inspired by Rush's "2112". We wanted to create an album that was, at heart, a prog concept album but executed through our own medium. Bands such as Haasts Eagled and Space Witch also had a personal influence on me when playing with initial ideas for the record.

We all spend a lot of time playing and running events in the UK Heavy Scene, so naturally we love bands such as Torpor, Opium Lord, Pet Brick, Grim Existence, Calligram, Monolithian & Geist to name a few.

12.What are some of your non musical interests?
T. Hooning cars, eating beans, creating art and spending time (drinking beers) with loved ones.

13.Before we wrap up this interview, do you have any final words or thoughts?
T. Just thanks for taking the time to put these questions together. We enjoyed answering them. We hope you enjoy the record

https://www.facebook.com/wallowingnoise
Posted by OccultBlackMetal at 11:53 AM No comments: 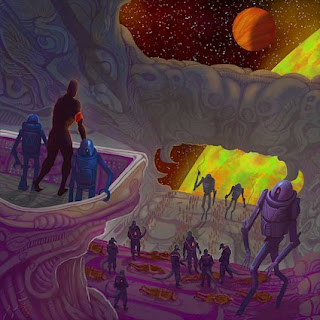 A  sci-fi  orientated  prologue  starts  off  the  album  along  with  a  brief  use  of  spoken  word  samples  before  going  into  a  heavier  musical  direction.  Vocals  are  mostly  high  pitched  black  metal  screams  while  the  slower  sections  of  the  songs  also  bring  in  elements  of  sludge  and  doom  metal.

Wallowing  plays  a  musical  style  that  takes  black,  sludge,  doom  metal,  grindcore  and  noise  and  mixes  them  together  to  create  a  sound  of  their  own.  The  production  sounds  very  professional  while  the  lyrics  cover  science  fiction  and  the  modern  political  climate  along  with  some  inspirations  from  the  writings  of  George  Orwell.

Posted by OccultBlackMetal at 8:04 PM No comments: