A  spoken  and  ritualistic  intro  starts  off  the  dvd  before  going  into  a  live  performance  which  starts  out  with  violins  and  an  introduction  which  also  shows  the  band  practicing  in  a  rehearsal  room  and  the  song  starts  out  with  an  avant  garde  vibe  along  with  some  spoken  word  parts  and  drum beats.

When  guitar  solos  and  leads  are  utilized  they  are  done  in  a  very  melodic  fashion  while  live  rituals  are  also  performed  at  times  and  after  awhile  grim  black  metal  screams  make  their presence  known  and  the  video  also  shows  a  Qabalistic  and  Hermetic  approach  to  rituals  in  some  parts  of  the  recording. 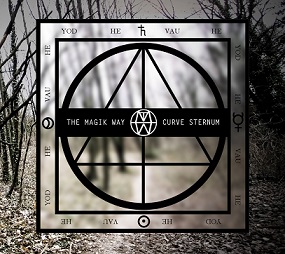 As  the  album  progresses the  music  starts  getting  more  experimental,  avant  garde  and ritualistic  sounding  while  also  adding  in  clean  yet  semi  distorted  guitars  at  times  and  the  songs  also  bring  in  a  good  amount  of  melodic  vocals  and  chants  and  none  of  the  songs  have  the  heaviness  or extreme  metal  elements  of  previous  recordings  but  you  can  hear  some  grim  elements  in  the  vocals  at  times that  are  very  close  to  black  metal..

The  Magik  Way  moves  away  from  the  black  metal  sound  of  previous  recordings  to create  an  album  that  is  more  in  ritualistic,  avant  garde  and  experimental direction  along  with  a  touch  of  neo  folk,  the  production  sound s very  professional  while the  lyrics  are  written  in  Italian  and  cover  Quabilistic,  Occult  and  Esoteric  themes.

1. Can you tell us a little bit about the project for those that have never heard of you before?


Well, The Magik Way was born in the 1996 as the result of an idea: to create a form of music totally linked to esoterism and magik, where sounds are influenced by our studies and our personal vision of music, as a mix between theatrical moods, applied music and experimental music.

Even if we started the project playing an obscure kind of black metal, after a couple of years we began to consider the music with new parameters, abandoning every kind of cliché.

The Magik Way is not a simple musical band, is even an order. Members of The Magik Way order are involved in the practise of Magik and principally spiritism and necromancy. As an esoterical order lot of members are not involved in music; inside the order operate philosophers, photographers, painters, psycologists, mediums, mathematics.

A mix between dark sounds and theatrical attitude. A sort of expressionist music, inspired by composers like Nino Rota, John Cage, Nicola Piovani, Bernard Hermann and a vocal attitude near to some conceptions of artists like Demetrio Stratos, Marina Abramovic, Diamanda Galas, Ettore Petrolini.

With our lyrics we want to explore the Man and the Nature, two macro-subjects. The Alchemy is the instrument we use to observe it, as a propagation of necromancy and spiritism.

Our effort is to find questions and not answers, is our conviction that “questions” generates knowledge.

La Via Magica Mistica (The Magik Way) is a term coined by Fulvio Rendhell, a great Italian spiritist, about a path divided in 4 phases (The Doubt, The Dizziness, The Sacrifice, The Knowledge).

The adept, is committed to overcoming and understanding of his condition, false before, wise after, through great suffering that will lead him to live different levels of emotion, annihilated first, then elated, until they reach a state of "Sacrifice" as renunciation of the Ego, to conquer a wider and dual vision of reality, dualism guaranteed by the presence, in the fourth phase, of the sign of Mercury which, as is known, is bipolar (Aurum et Argentum).

The reason we came out with a retrospective CD is about the passion that Marco Cavallini of Sad Sun Music put on the project as a dream come true: to present to people what The Magik Way played in the ’90.

Marco told me he still remember when The Magik Way demo tape was considered a “top demo” in the ’96 and after 13 years he purpose me to realize a work as a testimony of those years.

What Marco did not know is that The Magik Way created some other materials, and after heard it, he decided to publish the CD and start a collaboration.

6. On a worldwide level how has the feedback been to your music by fans of metal and occult music?

This is the first time we have the opportunity to communicate to the World our music, with the exception of some fans we have since the ’90 years. Even if we are involved in this project since the 1996 and we played in a great and famous band like Mortuary Drape, we always prefered to stay in a limited scene, in our country, working inside the theatre scene or the video-installation world, so far from the so called “market” of the music.

Simply we concentrated our energies to create something good for us.

7. What is going on with Mortuary Drape these days?

I really don’t know, unfortunately I’m not in contact with the band.

8. Can we expect future material from this music or is this only a one time thing?

As I explained, we are surprised that people deserve so much attention to our project. What can I say is that for the future we continue to work with Marco Cavallini (Sad Sun Music) and Francesco Palumbo (My Kingdom Music) in order to think about the publication of other material of the past (there are several works we have made in these last 10 years) or suddenly to focus our attention to new music we have composed in the 2012.

9. What are some of the bands and musical styles that have influenced your music and also what are you listening to nowadays?

We listen to all music with an open minded attitude, it is impossible to know which kind of music influenced us. Considering the fact we started every project by the lyrics we could say that probably is the Magik our favorite starting point.

10. What are some of the forms of Occultism and Satanism that have the most interest to you?

We are totally unreleated to all forms of religions, or pseudo-religious cults, especially the Christian cults or anti-Christian cults. We consider the atheism as a primacy to defend, a fact of freedom.

We practise the contemporary Magik, we observe the Nature and his duality, the Man and his role in the aureal space.

Recently the order of The Magik Way is doing study around the Water.

There are a couple of great passion in my life: contemporary art and the good red wine of my country.

Well, I just want to thank you. We hope you’ll enjoy the CD.

Please follow us on FB in order to know all the news about The Magik Way.

We need your inspiration. 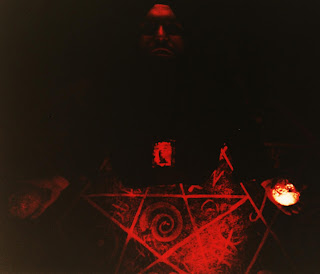 Posted by OccultBlackMetal at 1:24 PM No comments:

http://www.youtube.com/watch?v=6v7qvAiXc_Y
Posted by OccultBlackMetal at 10:51 PM No comments: