Well, quite a lot actually: we have four new band members, only two of the original members are left. The music will change in a way, we have added some other instruments and we have a female band member again: a permanent vocalist who also plays some folk instruments.
Our label, Witches Brew, made a restart a while back and provided us with the opportunity to release a new full-length compilation CD. Where also planning to release a new vinyl EP this summer and we're booking a lot of new gigs. Among them are several festivals of which Metaldays in Slovenia is the biggest.


2.How would you describe your musical sound for those that have yet to hear the music?

It's a form folk metal based on thrash metal instead of the more standard viking or power metal influences. There is also a big dose of punk and some black metal. The folk influences range from Irish Celtic through Finnish to Balkan or even medieval.
Basically we put in any music we like, as long as it's fast or heavy, and mix that with folk. Our music is fast and energetic, and also pretty blunt and raw. We don't try to make "pretty and shiny" epic folk metal and we're not a pagan metal band.


3.Can you tell us a little bit more about the compilation album that you have just released?

Over the past couple of years we self-released a demo and a couple EP's and one full length through Witches Brew. This album gives a pretty good view of what Chain of Dogs have been up to since the beginning. There's the songs from the EPs plus some demo-tracks, unreleased remixed tracks of the full length and a short song from a recording session we never used.

The part of our lyrics that's in the Limburgian dialect (which some people might confuse with Dutch or German) is mostly about the history, myths & sagas from our region, although from a different viewpoint than more traditional music from around here. Another important part and the main topic of our English lyrics is based on dark fantasy and horror, think of werewolves and the gruesome things you can do to hobbits!


5.What is the meaning and inspiration behind the name 'Chain of Dogs'?

"Chain of Dogs" is an event in one of the books of fantasy author Steven Erikson. He writes a pretty raw and dark form of fantasy that appeals to the roughness we like to have in our music. The lyrics from songs like Blood Follows and Bridgeburners are directly based on his work.

One of the highlights was definitely the Black Trolls Over Europe Tour we did in 2011 with bands like Suidakra and Waylander, especially Black Troll Winterfest and the date in Prague was cool. We also had some great regional gigs such as Skullyfest in Geleen or the smaller festivals we organised ourselves in Fenix in Sittard. The Sodom Metal Nights are always great gigs to play. We've had a couple of great gigs with Heidevolk too throughout the Netherlands.
Our stage performance is mostly very raw and energetic, with a touch of horror-fun. We don't try to reproduce the things you can do in a studio but try to build a powerful gig where people can have a party in the pit.


7.Do you have any touring or show plans for the future?

Of course! Very soon (March 22) we're going to celebrate the release of our cd. Furthermore we're looking forward to our gig at Metaldays in Slovenia.
We've just started booking more shows for the time to come as we wanted to focus on getting our new lineup ready to destroy! Nothing has been confirmed as yet but there's a lot in the pipeline.


8.On a worldwide level how has the feedback been to your music by fans of folk metal and thrash?

Up to now it's been very difficult to get into contact with people overseas, but we're getting there. In general, people are skeptical at first because of the mix of styles we use. Our deliberate lack of "Pagan" gives some doubt to the more basic folk-metal fans while the thrash-oriented side of our audience are usually a bit disturbed when they see our mandolin, flute and violin...
But once people have been listening for more than 1.5 minute they have a hard time standing still and weird things start to happen, like conga lines through a wall of death or square dancers in a circle pit.
No need to say that both the folk-lovers and thrashers are mostly positively surprised.


9.When can we expect another full length album and also where do you see the band heading into musically during the future?

We have started writing new songs for our upcoming EP. We expect to start recording the next full length around the beginning of 2015.
As far as the music itself is concerned; right now it is somewhat difficult to point to one direction. We hope the music will be rawer and grittier without losing the melodic element. A mix of unpolished Celtic folk and thrash metal will always be the basis of our music, but we'll probably explore some more influences like balkan folk or gypsy music.


10.What are some bands or musical styles that have had an influence on your music and also what are you listening to nowadays?

Our main influences are obviously thrash metal and various styles of folk music, with some polka and hummpa, quite a lot of punk and a bit of black metal.
We take some inspiration from classical music, also some country and blues.
This is basically the music we're listening to, but all band members have different preferences. For example, some members also regularly  listen to reggae, psychobilly or progressive rock/metal. Pretty much most existing music styles are acceptable except for R&B, Emo and breakcore.

This goes for the entire band: collecting toys like Playmobil & Lego, gaming, Carnival, barbecues and beer, epic movies, fantasy books, hanging around outside, either at a festival or in open nature, making campfires, hiking and hunting hobbits. Samana even likes sports.

Kloeëte, mie beer is leag (damn, my beer is empty).

Posted by OccultBlackMetal at 3:20 PM No comments: 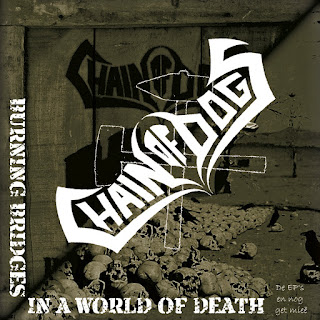 The  album  starts  out  with  an  intro  that  utilizes  traditional  folk  music  instruments  and  after  the  intro  the  music  goes  into  a  more  folk  metal  direction  while  the  guitars  and  vocals  are  more  closer  to  thrash  metal  while  they  also  bring  in  a  small  amount  of  clean  singing.

Song  lyrics  are  written  in  a  mixture  of  Dutch  and  English  and  cover  drinking  and  folklore  themes,  while  the  production  has  a  very  strong,  powerful,  heavy  and  professional  sound  where  you  can  hear  all  of  the  musical  instruments  that  are  present  on  this  recording.