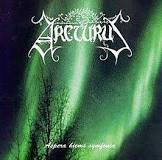 Arcturus are a band from Norway that consists of many Norwegian black metal legends that plays a very symphonic and avant garde form of black metal and this is a review of their 1995 album "Aspera Hiems Symfonia" which was released by Century Black Records.

Drums cover a lot of ground with a mixture of slow to mid paced drumming with some fast playing and brutal blast beats, while the synths have a very symphonic and avant garde feel to them that have some progressive rock influences with a small amount of violin, as for the bass playing it has a very powerful sound that follows the riffs coming out of the guitars.

Rhythm guitars contain a good amount of variety with some slow riffs that are very melodic with some mid paced black metal riffing and some occasional fast parts, while the lead guitars some very professional and melodic sound to them.

Vocals are a mixture of high pitched black metal screams and clean singing opera style of vocals, while the lyrics cover poetic, philosophy and cosmic style themes, as for the production on this recording, which was recorded during the 7th and 8th months of 1995 at Panser Studios sounds very professional and you can hear all of the musical instruments that are present on this album.

In my opinion Arcturus are a great band that recorded great album after one another and if you are a fan of avant garde chances are you already heard this band.RECOMMENDED TRACKS INCLUDE "Wintery Grey" "The Bodkin And The Quietus (..To Reach The Stars)" and "Fall Of Man". RECOMMENDED BUY.

Posted by OccultBlackMetal at 8:43 PM No comments: