1.For those that have never heard of you before, can you tell us a little bit about the band?
*Were from Newcastle, Australia. We blend Traditional World Folk Music with contemporary Metal, Mainly Death and Black Metal and Western Classical music.

2.You released in a new ep in March, can you tell us a little bit more about your musical sound?
*We try to experiment with cross cultural music to maximise the emotion required for each particular song. Thats why our music varies quite a lot from song to song. We don't like to limit the music to any particular sub-cultural "standard" etc, otherwise the writing process would be very boring for us. We all come from a wide background of musical styles so its great to be able to fuse all our styles together into something were all happy with.

3.I have noticed that when i listened to the ep, you had a sound that actually puts brutality in that genre and never use clean vocals, are you planning on adding cleaner vocals in the future or do you choose to remain on the heavier side of things?
* We like to play heavy because its such a great feeling. So whatever we write usually comes out fairly heavy. However, our new material delves into the darker sides of jazz and ambient traditional indigenous music from Central Asia and here in Australia. So you can expect to hear some more traditional styles of vocals such as overtone singing and shrill melodic vocalising. Theres some of this in the interlude of Golden Spirit but its not very prominent as there are so many layers.

4.What are some of the lyrical topics and subjects the band explores with the music?
*The songs we wrote early on focused on Scandinavian and Australian Folk-lore. Morning Burns Red is about the Viking Raid on Lindisfarne. In Our Honour is about the escapades of 19th Century AustralianBushrangers and Golden Spirit tries to give a first person account on the various rebellions that arose during the Christianisaton of Europe. They were ALWAYS written as historical fiction with no political or religious discourse intended. Thats part of the reason we chose not to release the lyrics with the EP as we didn't want anyone to get the wrong idea of what the songs, or us as a band are about. The lyrical content for the new material is more impressionistic with a philosophical basis. The goal is for the lyrics to be open tointerpretation. Therefore the reader can connect with the song in a more personal way.

5.I have noticed in the band's logo you have some of the lesser known and more obscure runes, does the band have a huge interest in Paganism?
*Absolutely. A big part of our philosophy is deeply connected with paganism. But it is not limited to only Nordic or Germanic Paganism. We wanted to use a range of symbols from varying cultures for our album layout for a few reasons. The main reason was to convey the fusion of cultures within the music, as well as our philosophical beliefs which are also very multi-cultural. Much can be learned fromthe ancient teachings, be they religious or philosophical. I contacted a local artist/tattoo artist named Nicolas Lissarrague, who I'veworked with before, to design the cover for us. Nick has a profound understanding of paganism and the beauty of all cultures so he was perfect. I told him our ideas and he painted the cover in water colours which we scanned and fitted to the template with the help of our good friend, Ben Bullivant who designed the layout. Both guys were great to work with and did an amazing job. Much respect!6.What is the meaning and inspiration behind the name 'Enviktas'?*When we started we focused on the battle element of folk metal. Turisas and Ensiferum were a big inspiration for this bands formation. We were brainstorming ideas for a name and one of us said "Victus"latin for "Victory". It was cool, but sounded to short. So to jump on the folk metal band-wagon of band names starting with "EN" we decided to put that in front and change the lettering haha! Not much else toit.

7.What are some of the best shows that the band has played so far and also how would you describe your stage performance?
*Some of our best shows have been local Newcastle ones. Theres some amazing sound men operating here at venues such as "The Cambridge" and "The Small Ballroom". We were lucky enough to play with Gloryhammer from the UK last month when they toured here. That was a lot of fun. We try make our shows flow like one big piece of music much the same as an orchestra. We have samples that tie the songs together to help paint a picture to the audience whats about to come in the next song. Also to keep up the momentum. Our live set up is 2x Guitar, Bass,Drums, Violin and orchestral samples so when its all together and mixedwell it can sound pretty huge! Good times!

8.Do you have any touring or show plans for the future?
Were currently planning to do a small tour of Melbourne, then follow up with an East coast of Australia tour. After that, wed like to hit up South East Asia and hopefully Japan. If all Goes well, Europe would be the next place. But small steps for now.

9.Currently you are unsigned,a re you looking for a label or have received any interest?
We haven't received any label interest as of yet. I think it would be a good move if the right company came along and offered a fair deal. A lot can be gained with a good partnership.

10.On a worldwide level how has the feedback been to your music by fans of folk metal?
Its been amazing so far! People seem to really dig it. We put the EP up for free on bandcamp, and I've been contacted by people in Lithuania, Peru, The Philippines, Finland and many more. I hope themusic gets shared to even more places!

11.When can we expect a full length album and also where do you see the band heading into musically during the future?
*We are starting to work on an Album now. We may release an EP with some acoustic covers and a few new songs in between hopefully. Musically i think it will become much more progressive a with regardto structure/rhythms etc. Also our themes and lyrical content will be much deeper. Ive got a few producers in mind that id like to work with to make it sound more organic. Like i said before, were going to keepon working at using remote cultural music to mix in with contemporary heavy music. Were looking at getting Indigenous and foreign musicians to collaborate with to make the music as effective as possible.

12.What are some of the bands or musical styles that have had an influence on your music and also what are you listening to nowadays?
* When it comes to folk metal, Turisas and Ensiferum were a huge influence. They really opened my ears to this genre and showed the variety you can get from it. These days we are listening to so many different styles and getting inspiration. Post-rock and post-metal Bands like "sleepmakeswaves", "Russian Circles" and "This will destroy you" are doing amazing work with the layers of texture within their music as well as using cutting edge technology to maximise the effectiveness of instrumental music. Behemoth have always been at thetop of the ladder in my opinion. They have a bad arse attitude and always punch out unique music. Their work ethic is very inspirational. Also Fleshgod Apocalypse and Septic Flesh do amazing work to blendclassical music with metal. Were big fans of all these guys.

13.Are any of the band members involved with any other musical projects these days?
* Definitely. Our Drummer is in the Post-Hardcore band "Tired Minds".They're progressive take on modern hardcore is really cool. Brendan our bass player is in the Viking Metal band "Pagans Realm. They'rereally rocky and sludgy! Kaden our guitarist plays melodica with the Funk Band "Strangers with Candy". Alex our Violinist is a great Electronic music producer under the name "5peed $nail" and is also corunner of the label "Murder is not a Crime". And i have an instrumental Post-Rock/Metal project. But we don't have a name as ofyet.

14.What are some of your non musical interests?
* Well for me personally, I love playing with my two Dogs. I enjoy studying History, Cosmology, Astro-Physics and various sciences such as Anthropology. Mainly focusing on traditional and early middle ageculture, Philosophy, Tattooing... That sums me up i guess.

15.Before we wrap up this interview, do you have any final words or thoughts?
* Thank you for taking the time to write up these great questions.They have been a pleasure to answer! Much Respect !Jordan :)

Posted by OccultBlackMetal at 1:34 PM No comments: 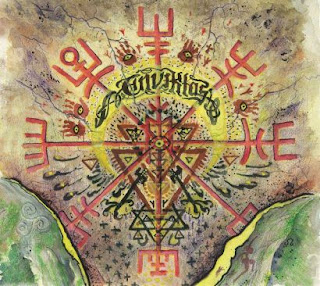 Enviktas  create  a  very  original  style  of  folk  metal  with  their  songs  only  using  growls  and  black  metal  screams  as  well  as  bringing  in  brutal  elements  and  traces  of  world  music,  ethic  and  classical  to  create  a  sound   of  their  own,  the  production  sounds  very  professional  sounding  without  the  backing  of  a  label  while  the  lyrics  cover  mythology,  paganism  and  folklore.

Posted by OccultBlackMetal at 5:53 PM No comments: