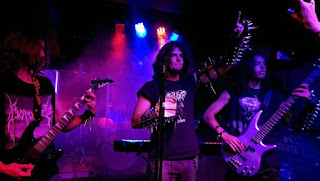 1.For those that have never heard of you before, can you tell us a little bit about the band?
1) We are a 2 pieces band, which play a kind of mixture of Black/Death Metal with some melodic stuff in it. We've had a few changes in our line-up and we're currently looking for a new singer which will also play the rythm guitar, and a bass player. We are 19 and 20 years old, but EP was recorded as we were 17 and 18. We are currently writing a new album, a full LP, which will be pretty daaaaaamm good.

2.Recently you have released an ep, how would you describe the musical sound that is presented on the recording?
2) It's pretty melodic, we wanted to have a melodic project but with more brutallity (blast beats, fast riffs etc...) as normal melodic death metal bands. Also there was a synth player which give us a kind of symphonic nuances, but she's no longer part of the band, so there won't be any synth in the future for this project.

3.So far all of the music has been instrumental, are you planning on using any vocals in the future?
3) Yes, actually we should have had vocals on the EP but we kicked out the vocalist because of musical divergency, so we removed the vocals, but there will be vocals on our future realeases.

4.What is the meaning and inspiration behind the name 'Waldensis'?
4) Waldensis is the ancient name for the region we live, in Switzerland the country is divided in what we call "canton" or "Kanton" in the german parts, and ours is called "Vaud". During the Middle Ages it was called Waldensis, that's why we choose that name.

5.What are some of the best shows that the band has played so far and also how would you describe your stage performance?
5) We actually haven't played that many, but the biggest one was at a small metal festival with the bands "Path of Desolation" and "Blasted". But as soon as we'll have a solid line-up we will surely do more of them!

6.Do you have any touring or show plans for the future?
6) Probably concerts plans with other local bands such as our friend from "Unholy Pagoda" and Tripping Tombstone"!

7.The ep was released on 'Sepulchral Silence Records', are you happy with the support that they have given yo so far?
7) Yes it's very good, they are doing everything needed, we couldn't hope more!

8.On a worldwide level how has the feedback been to your music by fans of melodic black and death metal?
8) We haven't had a lot of feedacks just because we're not that famous and because we haven't made a lot of advertising for it, but so far, they've been pretty good and thats very motivating!

9.When can we expect a full length album and also where do you see the band heading into musically during the future?
9) We are actually writing a new album at the moment, we are looking for some studios possibilities in Switzerland, and would record it next year if possible! It will probably be heavier, and more technicall for the most part !

10.What are some of the bands or musical styles that have had an influence on your music and also what are you listening to nowadays?
10) For the inspiration mostly:  Belphegor, Dark Funeral, Rose Funeral, Carnifex; what we enjoy listening to:  Beneath the Massacre, Brain Drill, Djent (vildhjarta, textures etc...), Origin, Thy Art Is Murder, Spawn of Possession, Rings of Saturn, Iron Maiden, Fallujah, Decapitated, Animals as leaders and many more!

11.What are some of your non musical interests?
11) We both study law, we both enjoy video games (Competitive Halo, Competitive Super Smash bros Melee, Pokemon, Zelda etc...) ; and hanging out with friends!

12.Before we wrap up this interview, do you have any final words or thoughts?
12) Thanks for interviewing us, we really enjoyed it, and stay tuned for our new musical releases!

Posted by OccultBlackMetal at 9:39 AM No comments: 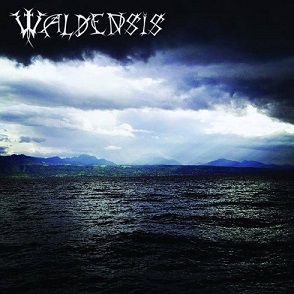 Waldensis  plays  a  musical  style  that  takes  the  more  melodic  sides  of  black  and  death  metal  and  mixes  them  together  without  any  vocals  or  songwriting  while  also  adding  in  some  symphonic  touches  to  create  a  sound  of  their  own  and  the  production  also  sounds  very  professional.

Posted by OccultBlackMetal at 11:31 PM No comments: