1.Can you give us an update on what has been going on with the band since the recording of the new ep?


We played a couple gigs, including two with Mayhem. Generally speaking we are preparing for the release of our new album.


2.You have a new ep coming out in May, how would you describe the musical sound that is presented on the recording and also how does it differ from the stuff you have released in the past?


It’s going to be a short but intensive stuff influenced by late Bathory and Crust Punk. A nice combination, isn’t it? The main difference is that the material has been recorded by the new drummer Pavulon. Our music got a solid kick thanks to his brilliant technique and feeling.


3, In your lyrics i have seen references to Slavic and Norse Paganism, Hindu, Aghori and other types of occultism, can you tell us a little bit more about your interest in those topics?


These are simply great topics for metal lyrics. To us the most important thing is to achieve harmony between the music and the subject of the lyrics -then it has a double effect. We like especially the Slavic mythology. It’s a fascinating topic that still is undiscovered.


4.What is the meaning and inspiration behind the name 'Thunderwar'?


In the very beginning the band was called Perun, the slavic god of thunder and war. To avoid potential pronunciation problems we decided to combine the two attributes and the result is Thunderwar


Regardless of stage size we want to play each concert better than the previous one. With the benefit of hindsight it’s difficult to say now which one was best because we’ve been trying to raise standards all the time. It would be easier to mention our worst gig 😊 When it comes to our gigs please don’t expect a theatre. The biggest fun for us is playing per se and watching people’s reaction to our music and not what we do on stage. Our weapons are instruments and not scenery.


6.Do you have any touring or show plans once the ep is released?


Yes, two concerts in Poland have been booked already. As for a full-featured tour we will think of it after the “Wolfpack” release


7.On the ep you had also covered a 'Darkthrone' song, what was the decision behind doing your own version of one of their songs?


We are big fans of Fenriz and Nocturno Culto. We played the song on our concerts even before the release of our first album “Black Storm”. We thought due to its punk rock character it would fit perfectly the concept of our new release.


8.The new ep is coming out on 'Lifeforce Records', how would you compare working with them to 'Witching Hour Productions'?


Currently we and Lifeforce Records are at an early stage of promoting “Wolfpack” so it’s too early to comment on that to the full but it is apparent they are acting efficiently and clearly.


9.On a worldwide level how has the feedback been to your music by fans of black and death metal?


We send our records to USA and Japan so it’s not that bad. More and more people are contacting us and asking about new stuff


Anything can happen. It’s difficult to predict how far we can go with our music.


11.What are some of the bands or musical styles that have had an influence on your current music and also what are you listening to nowadays?


The bands that influenced me most are Iron Maiden, Dissection and Bathory. But for some time now I’ve been listening to stuff like Wolfbrigade – Run With the Hunted, Bombus – Repeat Until Death or Judas Priest - Firepower


12.Outside of music, what are some of your interests?


Thank you for the interview and see you on our concerts! 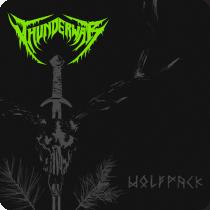 Thunderwar  plays  a  musical  style  that  takes  melodic  black  and  old  school  death  metal  and  mixes  them  together  to  create  a  sound  of  their  own,  the  production  sounds  very  professional  while  the  lyrics  cover  Paganism,  Occultism,  Mythology,  War  and  Psychology  themes.

THUNDERWAR Facebook
Posted by OccultBlackMetal at 9:18 PM No comments: