1.For those that have never heard of you before,can you tell us a little bit about the musical project?

V.XII was created in 2018 and was initially meant to be music for a new Deadwood album. But early on it became quite clear that this was something I wanted to have a moniker of its own, and a project that I will be able to invest more time in than Deadwood. The music itself is a mix of Death Industrial, Ambient, Doom and Black Metal with emphasis on Death Industrial. I have been involved in multiple bands and projects during my years in the sonic arts. Ranging prom primitive Black Metal in Blodulv and Doom/Death in Culted to more experimental industrial sounds in Keplers Odd and Black Ambient/Death Industrial in Deadwood to name a few. And V:XII is a combination of all.

I wanted to combine the elements of Death Industrial music with the atmosphere of Doom and Black Metal. Using a more beat oriented and structured approach to the tracks then I had done before. Without losing the atmosphere and intensity that I achieved in other projects before V:XII.

3.You are also involved with a few other musical projects, how does the music you do with 'V:XII' differ from the stuff you do with your other bands or groups?

V:XII is, as stated above a more structured and beat oriented creation then my previous efforts doing Death Industrial type of music. Something I think Deadwood lost along the way. And its not by any means Metal based music like Culted even if it draws some influence from genres like Doom and Black. So, it is a whole other entity. This will be my go-to project when doing solo albums from now on.

4.Some of your lyrics touch on Occultism, can you tell us a little bit more about your interest in this topic?

I have always been inspired by the occult and the symbolism that comes with it. In my youth I was experimenting with different types and branches of systems out there. Today not so much. But it keeps being a big influence on lyrics be it figurative or not.

5.You also have a few runes on your bandcamp page, how would you describe your interest in runology?

As mentioned above, that was one of the branches that I explored in my youth and it had a deep impact on me. Today its more it is more of a lyrical inspiration then anything else.

6.Can you tell us a little bit more about the artwork that is presented on the new album cover/

I had Max Winter (Teratogen) to do the artwork. He usually does designs for metal bands, but I think he did a great job with the layout. I sent him my tracks and the lyrics. And I let him come up with his interpretation of the music. The only part I played was to let him know my preferences and ideas. But he had, creative control over the layout.

7.With this project you record everything by yourself but also have experience working with other musicians, how would you compare the two?

It a whole other thing when one has complete control and don’t have to compromise about anything. Both has its pros and cons though. When recording with other people you get a direct feedback about what you need to re-work and record again, so you always have the opinions of others to fall back on. Good or bad.
But when you have 100% control and no one else’s opinion to take into consideration you get everything exactly the way you want. You can’t blame no one, but yourself if it doesn’t sound good. There´s a lot more pressure to perform at a higher level, there´s nowhere to hide. It´s just you.

8.On a worldwide level how has the reaction been to your music by fans of underground metal, experimental, noise and ambient?

The Rom, Rune and Ruin album was just released so I have yet to get proper feedback on that album. But in my opinion, it’s one of my best albums up to date, so I’m very eager to get some proper reviews. But other than that, I think I have had a good response in general for most of my albums. Reviews have been positive for both Culted and Deadwood in the past. Sure, there are always some people that dislike what you do but that’s inevitable. I create music that I myself want to listen to and its an outlet for me. If you don’t like it, don’t listen to it.

Culted is working on a new album, if things go according to plan it will be done in summer 2020. I will be recording vocals in the next fem months.

I have started to work on a new V:XII album but it’s on hold until the Culted album is done.

Deadwood is on ice but will most likely be an outlet for more Black Ambient music in the future.

Aum Arrhythmia is working on a new album, but I have no idea when that one will be finished.


10.Where do you see yourself heading into as a musician during the future?

11.What are some of the bands or musical styles that have had an influence on your music and also what are you listening to nowadays?
Too many to bands and genre´s to give you a list but here are three bands that have had a huge impact on me over the years:
Darkthrone
Tool
Brighter Death Now

Some of the records that I have been listening to the last few days are:
Kjellvandertonbruket – Doom Country
Blut Aus Nord-Hallucinogen
Wolfbrigade-The Enemy: Reality
Trepaneringsritualen-Kainskult
Human Impact-S/T 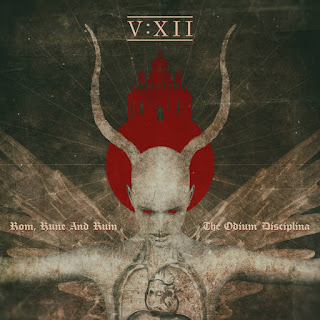 Posted by OccultBlackMetal at 6:14 PM No comments: