1. Can you give us an update on what has been going on with the band
since the recording and release of the new album?
As you all might have noticed there has been a while between them so
there has been happening quite a lot. First of all we were trying to get
the album done despite all the disappointments and bumps on the road
that delayed the actual release. At the same time we composed some new
material of course and threw several gigs. In the middle of everything
we have been studying and working like normal people and trying to spare
some time for our personal lives also.
2. Recently you have put out a new album, can you tell us a little bit
more about the musical direction it has taken and also how does it
differ from previous releases?
When we started making our music the goal was to make only folk metal
but during the whole ‘’making-the-album’’ process the musical direction
altered and got more depth towards other categories. We only released
one EP before this album which includes upgraded versions from the old
songs so it doesn’t differ that much.
3. Can you tell us a little bit more about the lyrical topics and
subjects the new release explores?
Lyrical topics are based around the nature and its unforgiving touch
towards the mankind. Of course there are other guidelines in those
lyrics which allow them to be seen for the listeners as they would like
them to be seen. There are also topics about the inner battle in a
feeble mind and of course from our little friend ‘’the hangover’’.
4. How would you describe your views on Paganism?
Well, I think it has a huge part in the Finnish history and it is a vast
source of great tales. So looking from that perspective it has numerous
ways to influence bands such as us. From the religious point of view I
don’t believe those stories or any other forms of religion. I’m just a
simple man trying to work to pay my bills and to make music.
5. What is the meaning and inspiration behind the name 'Thyrien'?
As much as I know Thyrien doesn’t mean anything specific. Inspiration
behind the name grew itself from the music we made and the name kind a
chose itself.  And it sounds right!
6. What are some of the best shows that the band has played over the
years and also how would you describe your stage performance?
2008 we were in the nostalgic Nosturi, Helsinki with bunch of other
bands and I think that is one. One pretty different but equally
enjoyable was in a barn during some guys birthday parties and the
audience went totally rampage, it was hilarious! In the year 2007 we
were playing (almost) in the St. Petersburg, Russia in the Club Arctica
and during our soundcheck the whole bar closed because of the national
restrictions and we didn’t have a chance to play even a single chord. It
was a major disappointment but the afterparty was crazy! And of course
we got lot of good pictures and stories to laugh about. On the stage we
try to give our fans an unforgettable show because they deserve it! We
try to be as energetic as we can and we change the setlist everytime.
7. Do you have any touring or show plans for the new album?
Yet there hasn’t been any tours planned but there will be.
8. On a worldwide level how has the feedback been to your music by fans
of black, death and folk metal?
Feedback has been surprisingly good and the welcome has been extremely
welcome. Even though the album has well aged songs, they still seem to
please the audience. The album reviews have given us a good feedback and
there has been lot of great points and stars etc. given to us. So we
have high hopes for the future.
9. What direction do you see your music heading into on future releases?
The basics are the same old Thyrien (if I can say like this at this
pointJ) but the whole concept will be a little darker from its nature.
What comes to the working as a band we will give extra account to the
planning and organizing the musical solutions we are going to make.
10. What are some bands or musical styles that have had an influence on
your newer music and also what are you listening to nowadays?
There are so many bands that have influenced us that the list would be
endless. Just to name a few: Wintersun, Ensiferum, Amon Amarth,
Insomnium, Dissection etc. Nowadays I listen more Symphonic Death Metal
because the bands from that genre have such a wide depth in their music.
11. Do you have any non-musical interests?
I like sports in its different forms. I play soccer and just started MMA
fighting to get my scarred face to look more beaten. And of course when
I have spare time I play with my computer or watch movies.
12. Before we wrap up this interview do you have any final words or
thoughts?
Thank you for the interview and all the best for you. I’d like to thank
our fans for the support they have given us to this point and hopefully
in the future!
-          Oskari Koivisto / Thyrien
Keep in touch
Oskari/Thyrien

Posted by OccultBlackMetal at 1:16 PM No comments: 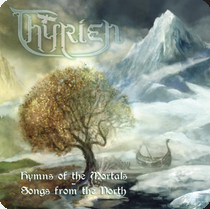 Song  lyrics  cover  Nose  Paganism  themes,  while  the  production  has  a  very  strong,  powerful,  heavy  and  professional  sound  where  you  can  hear  all  of  the  musical  instruments  that  are  present  on  this  recording.