1.Can you give us an update on what is going on with the band these days?
1. Stozhar Group welcomes readers' ... and the interviewer! At the moment the band is Stozhar in full combat readiness, rehearsals, preparing new material.

2.Recently you have released a new album, how would you describe the musical sound that is presented on the recording and also how does it differ from the stuff you have released in the past?
2. On the new album we tried to make the sound more powerful and dense, worked on the sound, as on the previous album, Ilya Morok and in our opinion the work he coped brilliantly.

3.Your lyrics cover Slavonic Paganism and Patriotism themes, can you tell us a little bit more about your interest in these subjects?
3. The pagan worldview is our life, we live it, that in fact is reflected in our music and creativity.

4.What is the meaning and inspiration behind the name 'Stojar'?
4. The Slavs believed that it rotates around Stozhar Perun Wheel of Time and the Universe. Stozhary - not just the center of the universe of the Milky Way, and even they patronize Russia.

5.What are some of the best shows that the band has played over the years and also how would you describe your stage performance?
5. Stozhar Group is quite active concert, one of the highlights of the show was held recently Folk Summer Fest.

6.Do you have any touring or show plans for the new album?
6. Of course we have the material for a new album, and we are already closely involved in the preparation of new songs. Most likely we will soon be releasing the single Internet.

7.The new album was released on 'Stygian Crypt Productions, are you happy with the support they have given you so far?
7. All of our albums come out, come out, and I hope will come out on Stygian Crupt prod. We like to work with this label, I want to emphasize the high level of professionalism of people who work there, for which they thank you very much.

8.On a worldwide level how has the feedback been to your music by fans of pagan and folk metal?
8. The new album, the audience perceived well, also quite high ratings given the resources that have made a review of the new album.

9.Where do you see the band heading into musically during the future?
9. What concerns the future of the group, we are not going to stop there, a lot of plans and we will bring them to life.

10.What are some of the bands or musical styles that have had an influence on your music and also what are you listening to nowadays?
10. Groups that have affected our work a lot, both Russian and foreign, but we tried not to be like no one of them, and to develop his own style. As for the groups that we are listening to right now they are also very much, mostly Russian metal scene.

11.What are some of your non musical interests?
11. Well, in fact, many members of the group have families and children, and free time is not much, so the main one hobby is music, many are involved in sports by music.

12.Before we wrap up this interview, do you have any final words or thoughts?
12. And finally I want to say, listen to metal, go to concerts, and support your favorite team.

Posted by OccultBlackMetal at 11:07 AM No comments: 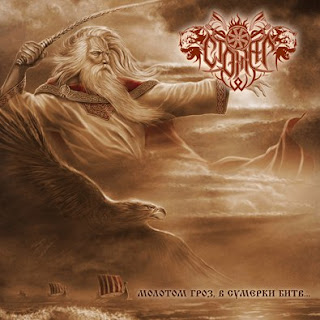 Stojar  plays  a  style  of  pagan/folk  metal  that  can  be  symphonic  at  times  while  also  mixing  in  elements  of  black  metal  which  also  gives  the  music  a  heavier  edge,  the  production  sounds  very  professional  while  the  lyrics  are  written  in  Russian  and  cover  Slavonic  Paganism  and  Patroitism  themes.