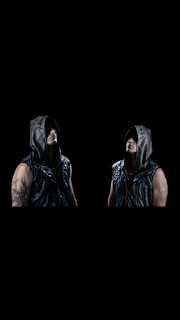 1.Can you give us an update on what has been going on with the musical project since the recording and release of the new album?
We have been very busy trying to promote the album. For the time being the album has only been digitally distributed, but we are planning to release it on cd and vinyl as well. Also working on getting  live gigs together. Further, we are already working on new material for the next album.

2. In July you had released a new album, can you tell us a little bit more about the musical style you went for on the recording?
We wanted a really ”solid" sound on this album, so we decided to work with Hertz studio in Poland, who are top professional and really know how to make a heavy solid sound. We wanted to make a great extreme metal album, with a lot of orchestral parts. So we focus a lot on getting the orchestral tracks match with the guitar/drums etc and vice versa. It took us time to find a good balance for that as its easy to overdo the orchestral parts. Also you can have a great guitar riff and a great orchestral part, but when put together it can sound awful. We really think we managed to find the balance we wanted on this album.

3.You refer to your music as 'dark matter', can you tell us a little bit more about this term?
Taken the name from cosmology (not the meaning) it suits our music perfectly. Its a balance between the extreme and the orchestral. However . Can argue that we play metal, but we try to perform with some kind of unique sound. It will only get more darker, harder and more epic. Come and hear for yourself..

4.What are some of the lyrical topics and subjects the band explores with the music?
Nero: My lyrics is deranged and utterly dark yet with compassion and erotic vibes. So I feel quite at home when I have completed a song. I draw my inspiration mostly through the occult, and other off world topics. written down and expressed in morbid poetry. Some things made up, some very real....
5.What is the meaning and inspiration behind the name 'Sinnrs'?
No purity! “love the sin, embrace transgression”. We all do it.. Also a notion to our nordic roots, by spelling it without an E.

6.Can you tell us a little bit more about the artwork that is presented on the album cover
Working on several ideas we came across this concept and idea. We had different hands on it, in the working process. The cover depict a picture of an archangel enthroned, forcing his surroundings into submission, with a great beast at his side. It transcends into a profound moment.

7.Currently there are only 2 members in the band, are you open to expanding your line up or do you prefer to remain a duo?
For the time being we will remain a duo, as it makes it very effective creating new music since be both agree on the musical direction. But if the right person/persons show up, we will be open to expand.

8.Currently you are unsigned, are you looking for a label or have received any interest?
Yes, we would like to be on a label, as a lot of labels have a very good platform for promoting and distributing music. With that said, it has to be a label that works with this genre of music, and know what audience to direct our music to. We contacted a few labels before releasing the album, but they were all busy, so in the end we decided to release it ourselves, as we wanted to get the music out ASAP, and hear people’s feedback.

9.On a worldwide level how has the reaction been to your music by fans of symphonic, black and death metal?
Very very positive. We have received great reviews from around the world, and gotten lots of comments and messages from people who gives us very positive feedback. We have been played on some metal radio stations where they were also positively surprised by our album. So all in all, we can definitely not complain about the reaction from people who have listened to our album.

10.Where do you see the band heading into musically during the future?
Evolving into even more orchestral mayhem and dark compositions. We have a lot of ideas on how to take our music to a further level. We are constantly making music and again evolving ideas and how to put it all together. Working on new material we´re using, I think 4-6 hours a day on one song. And its been now 2 months. So if we´re not satisfied we begin from the top until it lands in our laps.

11.What are some of the bands or musical styles that have had an influence on your music and also what are you listening to nowadays?
Well we could say mostly anything from the 60ties and 70ties, cause almost the best music originate from there, but.. Deeply inspired by some renowned composers of our time, Hans Zimmer Ennio Moricone. Also the written word by (in our opinion) some very talented authors, that also inspire us.
12.Before we wrap up this interview, do you have any final words or thoughts?
Thanks to all who have supported us. To the people who haven't heard the album yet, check it out on bandcamp and let us know what you think. We are very happy for all feedback. And we can´t wait to perform for people so we can show, what we´re made of. Thanks

Posted by OccultBlackMetal at 7:13 PM No comments: 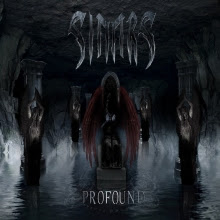 Sinnrs  plays  a  musical  style  that  takes  symphonic  and  orchestral  black  metal  and  mixes  it  with  melodic  death  metal  to  create  a  sound  of  their  own,  the  production  sounds  very  professional  while  the  lyrics  cover  dark  themes.