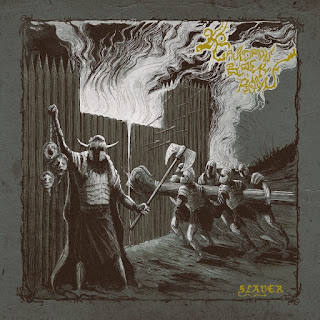 All  of  the  musical  instruments  on  the  recording  also  have  a  very  powerful  sound  to  them  and  as  the  album  progresses  a  couple  of  instrumentals   are  also  added  onto  the  recording,  semi  melodic  vocals  can  also  be  heard  briefly.  The  production  sounds  very  professional  while  the  lyrics  cover  darkness,  death  and  war  themes. 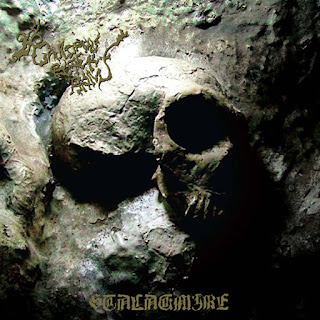 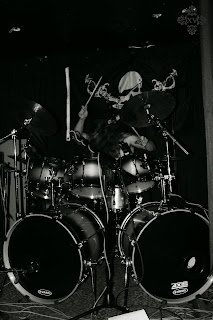 1. Can you give us an update on what  is going on with the band these days?

We play a patient waiting game for the vinyl release of the Poisoner Maxi EP through Parasitic Records! It's defining, as we mixed it down on a vintage 2-track machine, for the vinyl release! It sounds nuns-cunt sweet! CBR is finishing preparations to record the next album. An inhospitable location must be found yet to do this.
This next waxen abomination will be released by the unmerciful 20 Buck Spin Records. Perfect.

2. How would you describe the musical sound of the newer music and how it differs from previous recordings?

Rawer, driving, reverb and delay saturated, and I reckon my drumming is a little crazier. The whole production for the next album will sound unsound.

I thought a totemized animal that would best represent the sound and nature of the band was a giant, bestial, shaggy ram of the 'color' cauldron black.

The best was a show played in Adelaide/SA a couple years back at The Squatters Arms. The crowd were ravenous and inspiring. We thrive best on crowd banter and those South Australians are vocal! A very recent show in Melbourne/Victoria with Mongrels Cross and Spire also proved an illicit affair...crazy bastards packed into a tiny room, fucking great.

6. Do you have any touring plans for the  future?

Not as yet, just tentative plans to play a tour in the USA in 2013. That is provided the Anti-Christ or Christ does not return to end the world as we know it. Or the axis of the earth tilts, bombarded by comets, a shift in dimension or such. If none of that happens, then the tour is likely. Apocalypse pending. Obviously.

7. The new release came out on Abysmal Sounds, how did you get in contact with this label and how would you describe the support that they have given you so far?

Stuuuu has been a whore-friend in our whore-stables for many years. We respect him, his work, his penchant for supporting Australian bands and his tight pants that ever dwell below his waistline.
Granted Abysmal Sounds is not a large label, it has a good reputation and is direct. Abysmal Sounds is growing though and we will continue to work with them in some form in the future.

8. On a worldwide level how has the feedback been to your music by fans of undeground metal?

The best response is from the Men in the Underground Metal scene! We seem to illicit confusion and even a bit of ridicule from the modern-ites whom are grounded in metal of the past 5 years only. Calling us 'black metal', comparing us with the likes of Behemoth, Watain and such. The aged Men whom are grounded in all from hard rock, heavy metal, thrash metal, olde death metal and early black metal, they GET it! There are a school of younger folk who are schooled in such a way too, which is excellent!
You know, I have seemingly lied through my teeth regarding the 'black metal' label! We DO have black metal influences, but it is black metal like Masters Hammer, Root, Mortuary Drape and such! The overt obscurity can be heard most on our 'Slubberdegullion' album.

9. What is going on with the other projects these days?

More than one could imagine and less than one would expect.

10. What  direction do you see your music heading into on future releases?

The next album is near ready to record! It's much the same movement you would come to expect of CBR, but I reckon the new material is a little more driving, as opposed to The Poisoner, which had an injection of dirge. We have stepped back a little to the demo days in a few songs.

11. What are some bands or musical styles that have influenced your newer music and also what are you listening to nowadays?

12. How would you describe your views on Occultism?

I view it the only way it can be, with humor. Occultism is so mismatched, underscored, over-symbolised, misunderstood, overused, lost to time and the privy few that control its ancient truths. It's barely worth the bother!

Music is practically all encompassing! Asides that I enjoy strength and self defence training.

The latest Morbid Angel is not Morbid Angel. Do not be fooled, it is not the same band. Buy it to smash it against the rocks surrounding your cave entrance. 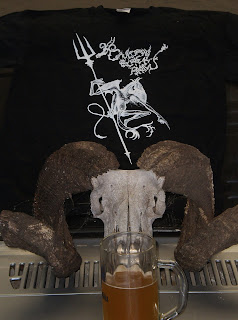 Posted by OccultBlackMetal at 7:33 PM No comments: 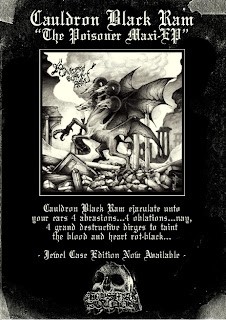 Cauldron Black Ram are a band from Australia that plays a mixture of black, doom, sludge and thrash metal and this is a review of their 2012 ep "The Poisoner" which was released by Abysmal Sounds.

Drums range from slow to mid paced to fast drumming with some blast beats being used at times, while the bass playing has a very dark tone with riffs that follow the riffing that is coming out of the guitars.

Rhythm guitars range from slow, mid paced to fast drumming that combines influences from black, sludge, doom, thrash and death metal to create a sound of their own along with some dark sounding melodies while the lead guitars are very primitive sounding black/death metal guitar solos and leads.

Vocals are a mixture of black/thrash style growls, high pitched screams and shouting gang vocals along with a brief use of spoken word ritualistic parts, while the lyrics cover occult, dark and horror themes, as for the production it has a very dark, rw and primitive sound to it.

In my opinion Cauldron Black Ram are a very great sounding mixture of black, sludge, doom, death and thrash metal and if you are a fan of this style, you should check out this band. RECOMMENDED TRACKS INCLUDE "The Poisoner" and "Infernal Interjections". RECOMMENDED BUY. 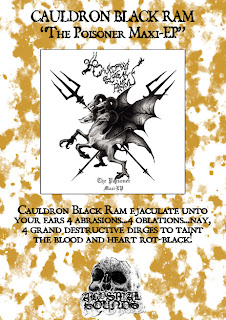 Posted by OccultBlackMetal at 11:26 PM No comments: