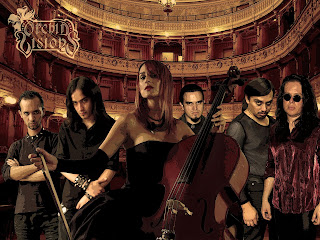 1. Can you tell us a little bit about the band for those that have never heard of you before?
The band was created in September of 2006, in the Heredia province by me as the lead guitar, since then we have self-released 2 Demo/EP's: "Orchid Visions" (2008) and "Dante's Inferno" (2011), and nowadays we're working in our first Full-length album, which is expecting to be released at the end of this year. We have been active since its creation and shared stage with many bands. Since September 2010, our drummer Nazgul, along with me, has become an important member with the leadership to explore and improve the goals of our band.

2. How would you describe your musical sound?
Our musical sound, during the years, has changed progressively. Nowadays we consider our music as a symphonic Goth metal band.

3. What are some of the lyrical topics and subjects the band explores with the music?
Basically, Nazgul and I are very influenced in fantasy and horror classical literature and with a mixture of surreal backgrounds and subjective experiences. So we create our lyrics inspired in Epic, Fantastic, Mythical, Horror and Legendary topics and related with personal experiences.

4. What is the meaning and inspiration behind the band’s name?
The inspiration comes from the characteristics of the orchid flower. The band’s name means that we can gather a lot of musical influences from all of our members, and then we can create something better as a team, that has been always the vision of our band.
The definition of our band's name is that, as well as the orchid, we always look for acquiring new features so we can be able to survive in the environment that we are related and demonstrate a greater impression with our music.

5. What are some of the best shows that the band has played so far and how would you describe your stage performance?
Our best shows have been: Fëte de la Musique Festival (2008), Veranos en el Cenac Festival (2008), Headbangers Panama Concert (2010) in Panama City, Noche de Mujeres Epicas Concert (2012), and our latest show as the support band of the Theatres Des Vampires Concert in Costa Rica (2013). Our Stage performances includes: Goth wearing or medieval disguises, fancy masks, cloth dancers and an instrumental intro to make the performance more theatrical.

6. Do you have any touring or show plans for the future?
Actually we are now waiting to finish our recordings of the new album, so we can continue playing our new songs at stage. So that means that our priorities on this moment are the studio recordings.

7. Currently you are unsigned are you looking for a label or received any interest?
Unfortunately no, and that is because is very though in our country to have success with any metal band. But we are always looking for any options to send our material all around the world.

8. On a worldwide level how has the feedback been to your music by fans of metal?
It has helped us a lot to keep improving our performances at stage and give them back what they are expecting from us in every show. It has increased our contacts in many communication media, and we're expecting to receive more in the future.

9. Are there any other musical projects these days?
Well, actually Nazgul and I are creating another band but for heavier and extreme metal fans, the band is called “Kerioth” and is a depressive Black Metal band, we are just using it as a recording band.

10. What direction do you see your music heading into on future releases?
In this country, the self-releases are not that well received by the metal fans, because the most of them will not pay for anything, they rather to download it than help the metal scene in this option, but anyway it always help to spread it online and receive good feedbacks from those who are interested in listen our recordings.

11. What are some bands or musical styles that have influenced your music and also what are you listening to nowadays?
We are always gathering the former and present influences from all of our band members through all of these years and we’ve evolved in several metal styles.
The most common influences in our band are: Theatres Des Vampires, Theatre Of Tragedy, Tristania, EverEve, Therion, Epica, Lacuna Coil, Nightwish, Vintersorg, Trail of Tears, Darkwell, Crematory, Stratovarius, Nightmare, DIO, Black Sabbath, Judas Priest, Manowar, Rhapsody of Fire, Batlelore, Lacrimas Profundere, Helloween, King Diamond,
Iron Maiden, Luca Turilli, Dream Theatre, Symphony X, among much other...
And of course we also use other culture or classical influences that are not related with the metal scene to make it much attractive to our fans…

12. Does Occultism play any role in your music?
Not at all, actually we don’t want to make any controversy in our lyrics, but it is always open to be interpreted in many ways. Many of our songs are related with some personal experiences but arranged with fantasy, epic or horror topics to make them more interesting.

13. Outside of music what are some of your interests?
Well, talking about myself, I am always interested in having the art besides me at all time, that’s why I have studied the graphic design and photography career and it had always helped me with the group as well in regards their band image.

14. Any final words or thoughts before we wrap up this interview?
Yeah! Don’t hesitate to join us on Facebook: http://www.facebook.com/orchidvisionsmetal also you can download our latest EP "Dante's Inferno": http://orchidvisions.bandcamp.com/ or you can always contact us through: orchidvisions@live.com and thanks to all of you guys for the support and STAY METAL, DUDES!!! lml 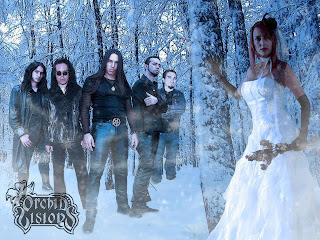 Posted by OccultBlackMetal at 7:56 PM No comments: 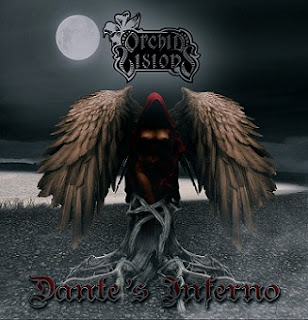 Rhythm  guitars  range  from  slow  to  mid  paced  tiffs  that  combine  melodic  black  metal,  gothic  and  traditional  metal  together  to  create  a  sound  of  their  own,  while  the  lead  guitars  are  very  melodic  sounding  heavy  metal  guitar  solos  and  leads.