Hello there, here is Ivan - the Singer and Guitarist of the Craving. Well, the band went on two weeks european tour the day after release called Hell Revisited Tour 2013 together with two other bands. Right now we are prepairing for the Ragnarök & Darktroll Festivals which are coming up in April and May plus starting to book shows for the end of the year.


2.Recently you have put out a new album, can you tell us a little bit more about the musical direction it has taken and also how does it differ from your previous recordings?

The music goes into a more grow up direction, the difference to our previous record is deffenetely the musical thickness of the album. The music it self is more thought-out but still full of energy and hooks. The production this time is really heavy but still clear and punchy, responsible for it was Christoph Brandes who also produced such bands as Necrophagist, Finsterforst, Unlight etc. in the past.

3.Can you tell us a little bit more about the lyrical topics and subjects the band explores with the new album?

There are different lyrical themes: from personal feelings, to nature worship over Russian silverage poetry to Philosophy. We use two poems by Nikolaj Stepanovich Gumilev the Russian silverage poet on track Mik and Olga. The song "Targaryen Wrath" is about Daenaries Targaryen of the House of Targaryen (Geordge J. J. Martin - A Song of Ice and Fire) starring Chris Caffery (Ex-Savatage) on the lead guitar. "Sons of the Rebellion" is about Luke Skywalker during the attack on the Deathstar. Olga is a poem by Gumilev based on Russian history about Olga of Kiew, its basically about her four revenges on the murderers of her husband. "Breath after Breath" is a song against the project 2045, which is crazy in our opinion. The lyrics for "In die Nacht hinein"(English: Into the Night) were written during a rainstorm. As you can see there is no particular topic, we write down our interests, thoughts and feelings on paper.

4.I have noticed that you write lyrics in English, German and Russian, what was it that motivated you to put 3 different languages on an album?

Im Russian native speaker, so it is easy for me to express myself in Russian language. The same goes with German and English, well we like English. The whole three language thing startet spontaniausly. At first with "Into the Forest" (Craving - s/t 2012) and "Wolfsherz" (The heart of the wolf), where the lyrics appered at first. Music is art and its about to express yourself, so we decided to put all the lyrics on the album. I really love Gumilevs poems, so we used them as lyrics. Finish bands like Amorphis are doing it with Kalevala all the time, why shouldn't we do that? Plus we do speak those tongues, so its comes for us pretty natural.

We were just kids back than searching fastly for a band name due to our first concert on 24.04.2006, so we decided to call the band "Erebos" on the run. (Erebos: Greek for Darkness or Greek God of Darkness). The name was already taken by quite a few bands so we decided to rename the band. We had the names Hybris and Craving to choice from, so we decided to name the band Craving. It represents perfectly our craving for music and the whole passion behind it.

Our stage performance is very energic and entertaining, we try to communicate as much as possible with the crowd and make them feel to be a part of the performance. Thats actually what they are for when they're going to see a show. Our best show so far? There were so many shows in the past years, the deffinetely best Show on the recent european tour was the last gig in Mlada Boleslav (CZ) in the Club called Fararova Sluj. It was located in an old wine basement with almost no light which created an amazing atmosphere on and off the stage. The crowd was amazing and interacted perfectly with us.

7.Do you have any touring or show plans for the new recording?

As I said before we were on tour last year and right now we are planing the autumn shows. Before that you can see us in Germany on the Ragnarök Festival 2014 and Darktroll Festival 2014 among bands like Finntroll, Satyricon, Manegarm etc.

8.On the new album you had some well known people in the metal genres doing session work, how did you get in contact with some of these well known musicians and also where you satisfied with the final results?

Yes we have some guest appeariences on the album! Chris Caffery, the guitarist of the infamious Prog Rock/Metal superstars Savatage has contributed a guitar solo on "Targaryen Wrath". I have contacted Chris via Email at the end of 2012 and suprisingly to myself he liked what he heard and contributed to the album. Niels Löffler is the Bassplayer (!) of the German Power Metal newcomers Orden Ogan, who is actually a really really great guitarist, so I asked him to contribute on "In die Nacht hinein" he is performing the epic guitar solo in the middle of the song. Agalaz is the front man of the German Pagan Metal band Obscurity, after some shows with them we became friends and I asked him if he would like to contribute already on our debut album unfortunately he has no time back in 2010, so he contributed the lead growls to the song "Schwarze Flügel". Andreas Möller is the man with the great voice and the front singer of Bremens local Power Metal band Dystopolis, we asked him to do the Choirs on "Dance with the Wind" due to my low voice range, he did an amazing job. The other musicians are our friends and we are very happy to have them on board.

9.On a worldwide level how has the feedback been to your music by fans of black, death and folk metal?

Suprisingly good. Resentlry I get tons of  requests from people from Brazil. We get very good response all over the world. We even have Fans in Japan, thats fantastically crazy!

10.Can you give us an update on what is going on with some of the  band members other musical projects these days?

They have only Craving as the main project. If you concentrate 100% on many musical projects (At least your name is Devin Townsend or Ayreon Lucassen)

11.Where direction do you see the music heading into during the future?

We hope the music will evolve in the positive way and be still as energic as now no matter which further musical direction we will choice.

12.What are some bands or musical styles that have had an influence on your music and also what are you listening to nowadays? Me and our guitarist Thorsten Flecken and Leonid Rubinstein are huge Iron Maiden fans. Thorsten had once a big vinyl/flag/cd collection of Maiden. Still we all have our particular taisted, our Drummer for example listens mostly to tech death metal/brutal death metal, you can guess why hehe

I have to many bands to mention, the list is just to big.

13.How would you describe your views on paganism?

Our views of paganism, well we are not following some pagan religion. What I think is important in live is to be yourself and do what thou wilt. Nature is sacred and we are a part of it, but unfortunately we do forget.

Thank you for this interview! Thanks to everyone who have made it so far!

Please support our Label and buy albums from the offcial webstore www.apostasy.de

Craving Will Rise!
Posted by OccultBlackMetal at 8:19 PM No comments: 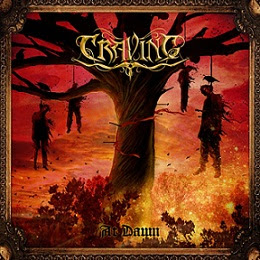 The  album  starts  out  with  a  very  heavy  and  brutal,  melodic  death  metal  sound  along  with  blast  beats  and  deep  growls  which  also  use  black  metal  screams  while  also  bringing  in  a  mixture  of  mid  paced  and  fast  parts  which  also  lead  up  to  melodic  guitar  solos  before  bringing  in  acoustic  guitars  and  more  folk  orientated  sound  along  with  clean  melodic  singing.