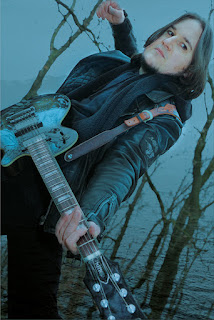 Skaldir: Hello! The release of our debut album was quite successful, so we're in a good mood and I have already started to write new songs for the follow-up album that hopefully will not take as much time as the debut.
We also wanna start rehearsing for live shows in 2019.

2. A few months back you had released your first album, can you tell us a little bit more about the musical style you went for on the recording?

Skaldir: It's a rather melodic metal style, rooting in Black Metal. We call our music “Epic Skaldic Metal”. You could also call it Pagan Metal, Viking Metal or Epic Metal, but since our music has this storyteller vibe, we wanted to have the word “skald” in there, too.

3. You label your music as 'epic skaldic metal', how would you say your music differs from bands that play more of a pagan metal style?

Skaldir: We surely aren't on the “funny” side music-wise. We don't play party or drinking music. We're rather on the path old bands like BATHORY took, when the whole thing started.

4. What are some of the lyrical topics and subjects you explore with your music?

Skaldir: It's a mixture between mythological, historical as well as tales and legends. We also have four songs on the album which are based on “The Lay of Wayland” – an old Germanic legend found in Anglo-Saxon, German and Scandinavian sources.

5. Can you tell us a little bit more about the artwork that is presented on the album cover?

Skaldir: The ship on the ocean scenery fits the title and leaves a lot open for imagination, because you don't see men on it, nor sails.

6. Currently there are only 2 members in the band, are you open to expanding the line up or do you prefer to remain a duo?

Skaldir: We'll see. Personally I like to work as a duo, and like to compose song on my own. It worked really well, so I don't think that for the albums the line-up will be expanded. But I surely want to have our drummer Dennis on the next album as well!

Skaldir: We’ve chosen to be without label on purpose. The music industry has changed, and I don't really know what an indie label could offer us. But it's also a lot of work to do everything on your own, so maybe in the future there will be collaborations with labels again.

8. On a worldwide level how has the reaction been to your music by fans of black metal?

Skaldir: For a newcomer band there is really nothing more we could ask for. The album was extremely well received. We got tons of great reviews and a lot of plays on Spotify. It was like a dream start.

9. What is going on with some of the other bands or musical projects these days that both of the band members are a part of?

Morten: I’ve been involved in four bands or projects for quite some time now: THULR, SKARDUS, HERNE and GRAVEHAMMER.
Skaldir: I'm in a few other bands as well. The most known might be ELANE, then I have an Irish Folk Project called OVER THE HILL and a Death Metal band ABSCESSION.

10. Where do you see the band heading into musically during the future?

Skaldir: The style will more or less stay the same. The songs on the debut are maybe a bit too simple, so maybe we will have some longer and more progressive songs in the future. But I'm not sure yet.

11. How would you describe your views on Paganism?

Morten: I guess it would take too long to describe my personal views on paganism in detail here. Also, I think, that religious - or better spiritual matters – should remain something personal, something private as far as ones daily life is concerned. As it is clear from the lyrics, northern European mythology and lore are things I feel a close connection to, yet I do find similarities and very interesting aspects in other “pagan” or animistic beliefs, e.g. in the mythology of the Native Americans of present day USA and Canada. In general, I think that there is far more to explore and to discover than the usual stories of the two Eddas.

12. What are some of your non-musical interests?

Skaldir: I'm a sound engineer, that's my job and also my passion besides music. In my free time I like to be outside hiking.
Morten: I like to be outside in the woods or on the beach and spend time with my friends and family. And I’m interested in history, so this offers lots of chances to visit interesting places.

13. Before we wrap up this interview, do you have any final words or thoughts?

Skaldir: As the year is ending and winter is near people naturally think about what happened in their lives this year and what might happens in the next year.
I just wanna say thanks to all the people interested in our music and hope we'll have some new tunes for them next year.

Posted by OccultBlackMetal at 8:06 PM No comments: 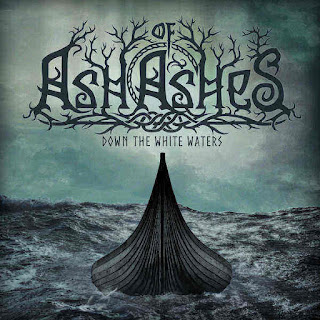 Ash  Of  Ashes  plays  a  musical  style  that  takes  pagan,  melodic  black  and  folk  metal  and  mixes  them  together  to  create  a  sound  of  their  own,  the  production  sounds  very  professional  fro  being  a  self  released  recording  while  the  lyrics  cover  Paganism and  Nature  themes  themes.

https://www.youtube.com/watch?v=1NyM2H9BgRU
Posted by OccultBlackMetal at 7:23 PM No comments: