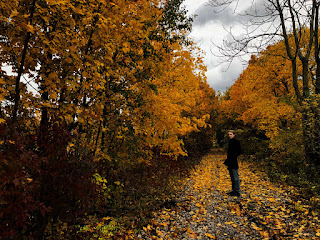 Epta Astera is a way to explore transcendence in music. Despite the wildly different timbres, atmospheric metal and polyphonic chant are both trying to evoke the same sort of feeling in the listener. In that respect, the fusion of the two is quite natural. Being able to anchor atmospheric metal in a tradition much older than it, and to bring polyphonic chant forward into a new medium, has been very rewarding, and fertile enough to keep my interest as a musician for 12 years now.

The main difference is that Feste Burg doesn't make compromises. In previous work I'd made a point of spending essentially no money. Everything through 2013's Semper Reformanda was recorded on the internal microphone of my 2007 laptop, for example, and most of my instruments were things I'd picked up for free at one point or another. Considering those limitations, it turned out pretty well. But for Feste Burg, I wanted to see how far I could get without those constraints. I invested in new instruments, new mics, new software – and all of these investments didn't just improve the sound quality; they also gave me the freedom to write and record more ambitious material than would have been feasible before, and to really envelop the listener in the Gregorian chant. I've also been able this time to mostly avoid the use of synths, which is a compromise that I'd been dissatisfied with on previous releases.

3.This is also your first album since 2013, can you tell us a little bit more about what has been going on during that time frame?

Besides honing the sound of Epta Astera, I started and finished a PhD in that time, so I've had to really take my time finishing Feste Burg. In a lot of ways that's been good: it's allowed me to be more thoughtful in the songwriting, to go through multiple revisions of older songs, and to put more polish on the sound overall. I believe the end result justifies the long wait, and I hope listeners will agree.

4.You label your music as being 'Gregorian Folk Metal', can you tell us a little bit more about that term?

I've talked already about the Gregorian and the Metal parts, so the Folk part is justified partly from convenience (these are the instruments I had to work with initially), and partly from principle (I rarely find the bare guitar/bass/drums ensemble compelling on its own).
The various folk instruments I use are useful tools besides the chanting to set the stage and transport the listener to another time and place.

5.The lyrics on the new recording are a concept album, can you tell us a little bit more about the story you covered with your songwriting/

This is an album I've wanted to write since the beginning of the project. I find Martin Luther personally compelling as someone who bore the weight of a civilizational tumult on his own shoulders without cracking or compromising. The first half of the album is about his journey to that point. And at the climax, he was able to maintain his integrity in the face of both tremendous opposition (the subject of "Exsurge Domine" and "Ich Kann Nicht Anders") and supposed allies who wanted to take his ideas too far (the subject of "Die Mordischen und Reubischen Rotten der Bawren"). In our era of populism and polarization, striking this balance – resisting the pull of both friends and enemies – is enormously difficult, but also crucial.

I'm also interested in the Reformation as a turning point in the history of Western Civilization. On the one hand, the break from medieval modes of thought and a rationalistic approach to religion made possible the Enlightenment, the Industrial Revolution, and eventually almost everything that we enjoy about the modern world. On the other hand, critics point to the iconoclasm of the Reformation as the ultimate source of things like populism today, where the primacy of conscience turns into kind of an anti-intellectualism. Both of these are true: much of what's worth celebrating about Western Civilization can be traced to the Reformation, and also the fruit of the Reformation might contain the seeds of its self-destruction. That ambiguous legacy is the subject of "Augsburg". Even if Luther himself had the strength and integrity to navigate the path between stagnant conservatism on the one side and suicidal radicalism on the other, the rest of us might not.

6.What is the meaning and inspiration behind the name 'Epta Astera'?

Epta Astera means "seven stars" in Greek, coming from Revelation 1:20. Unfortunately I mis-conjugated, and by the time I realized, it was too late to change the name. So with apologies to my Greek listeners, I've stuck with it.

First of all, the architectural theme reflects the title of the album. "Feste Burg" means "Mighty Fortress", which – along with the stone chamber on the cover – suggests something permanent and immovable.

Second, the oculus on the cover reflects Luther's own agony in arriving at his convictions (the subject of "Noche Oscura" and "Metanoia"), both physically (going through it in a chamber at his monastery) and emotionally (the torment of being able to see a light that remains unattainable).

Third, returning to the ambiguous legacy of the Reformation I mentioned earlier, it suggests our own striving for an unattainable light. We've seen over the past 500 years just what human society can be; how much people can do when their creative energies are channeled into value creation. This is a blinding and intoxicating light. And we're just starting to wake up to the possibility that it may turn out to have been a historical aberration. A civilization based on Reformation ideals burns brightly, but it may burn out, and that light may slip back out of our grasp forever.

8.On the recording you record most of the music by yourself , would you be open to expanding the line up on future releases?

For sure. In fact the guitar solo in the middle of "Noche Oscura" was played by a very talented friend of mine. I'm happy to draw on the talents of others for Epta Astera, though if creative control were to be shared, it would be the start of a different project.

9.On a worldwide level how has the reaction been to your music by fans of underground metal?

From the beginning Epta Astera has been distributed almost entirely online, so the audience has been small, but global. The reaction has been especially positive in Latin America, which I didn't expect from the outset. I speculate that the chant aspect resonates in an area where most people are still raised Catholic. It's also an area that's been deeply shaped by that double pull of conservatism and radicalism. But it may also be that there's a stronger culture of underground metal in Latin America. Either way I won't complain!

10.Where do you see yourself heading into as a musician during the future?

The releases to date have mostly explored historical themes. The next release, I think, will explore more current themes, especially as they relate to the double pull I mentioned earlier. I'd also like to expand the black metal aspect to make it as intense of an experience as possible.

My original three inspirations were Tenhi, Orplid, and Subway To Sally. Later on I was heavily influenced by Agalloch. Since I started in 2007, however, there's been a big renaissance in both atmospheric metal (I've been enjoying recent and upcoming releases from Alcest, The Great Old Ones, and Latitudes) well as atmospheric folk (like Wardruna or Heilung). The market for this kind of enveloping and transcendent sound seems a lot thicker now than it was at the outset, when I had to cobble it together from disparate influences.

My day job is as an economist; I'm interested in how money facilitates humans organizing themselves to accomplish big things without necessarily intending to do so, and how norms, institutions, and beliefs evolve over time. You probably picked up on some of the latter in my earlier answer about the Reformation. My approach there, like my approach to music, is eclectic. I enjoy being able to make connections that no one else has made before; to take disparate approaches and show how they can be used together to shine new light on a problem. Besides that, I also enjoy spending meditative time outdoors, hiking or kayaking.


Thanks for the thoughtful questions and for taking the time to do the interview. I'll just close by emphasizing the importance of transcendence. It's something that's crucial to a rich life, but it has to be pursued intentionally today. We don't get it automatically anymore, in part because of Reformation attitudes. Epta Astera is my small contribution to filling that void, and I hope others will take up the work as well.

Posted by OccultBlackMetal at 10:46 PM No comments: 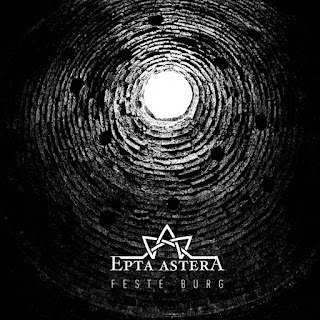 https://www.facebook.com/eptaastera/
Posted by OccultBlackMetal at 11:44 PM No comments: