1. Can you give us an update on what is going on with the band these days?
Hi there to everyone! At the moment we are preparing our live show for the upcoming Russian tour with Marduk, Vader & Kataklysm and, in addition to this, we are writing a lot of new material for our 4th album.

2. How would you describe the musical sound of the new album and how it differs from the older recordings?
Hmm, it’s quite complex. For me DARKEND are the pure expression of what I use to call “OBSCURE HORROR METAL”: there, you can find dark and melancholic extreme metal tightly combined with black metal patterns, classical symphonies and sulphur heavy riffs in the vein of Mercyful Fate/Angel Witch together with bleak ecclesiastic compositions, harmonies directly taken from the gloomy and dramatic theatrical representation of the XVIII century, straight melodic straight guitar solos and some atmospheric nocturne ambience.
Concerning “Grand Guignol – Book I”, well… it’s not a simple album but a real theatrical representation in which music, graphics, conceptual histories and lyrics complete themselves to create a whole parallel dimension: it’s more structured, more dramatic and more atmospheric than the previous albums. With it we tried to bring the most characteristic parts of our sound to their extreme point: so, what has to be aggressive is very aggressive, what has to be dark and melancholic is even more dark and melancholic, and so on.

3. What are some of the lyrical topics and subjects the band explores with the music?
The ideological substrate of DARKEND is deeply related to Philosophy, Magic, Psychology, Occultism... and on a more general level, I can say that all of our songs are strongly connected to everything that is mysterious, unknown, bleak and horrorific, topics through which we activate a profound inner-ritual to investigate and at the same time to express our Souls. Lyrically, this third opus takes its moves from a conscious and profound esoteric research exploring through a rich narrative plot the common roots of occultism and spiritualism, self-martyrdom and black magic ceremonies. There, behind the curtain, you will hear a conceptual tale of sanctified sins and loathed purity, of mercy and murder, of gentle wickedness and dismal virtue, where everything is melted with its contrary: a theatre of abominations in which humanity roams unconscious of the highest cosmos’ secrets.

4. What is the meaning and inspiration behind the bands name?
The name DARKEND incarnates everything that is occult and obscure, intended as a strong fascination that gives us strength and inspiration. The end wrapped in darkness, the abyss, the unknown that opens its doors on mystery, on fantasy and on a dreamlike dimension.
In addition, our name hides an esoteric anagram that will be probably revealed in the lyrics of our 5th album.

5. What are some of the best shows that the band has played so far and how would you describe your stage performance?
There has been a lot of great live shows, especially the ones during our European tours supporting Rotting Christ and then Samael, Melechesh & Keep Of Kalessin. In particular the fans from Poland, Czech Republic, Romania, Bulgaria and the other eastern countries were amazing and they directly contributed to render these  shows very special.
About our live performances I can say that concerts are one of the most important part of the DARKEND philosophy: we live them as genuine ceremonies of darkness and horror where every suggestion and feeling is amplified with the use of some scenic elements such as pentagrams, candles, bleak masks, incense and dead branches, all dropped in a strong theatrical and grand guignolesque interpretation. As you can see, it is not a simple show; it is a proper and real ritual.

6. Do you have any touring plans for the new release?
Yes, on May the 15th we will leave for Russia to start there the first part of the “Grand Guignol” tour, supporting great bands such as Marduk and Vader. Then we will probably take part to some Summer Festivals and then, at the beginning of Autumn, we will schedule the second part of the tour.

7. Currently you are signed to Crash And Burn Records, how did you get in contact with this label and how would you describe the support that they have given you so far?

8. On a worldwide level how has the feedback been to your music by fans of symphonic black metal?
The feedback has been fantastic thus far. We are collecting superb reviews (most of them are full rating) almost everywhere  and also the comments that we found on some forums are fantastic. This is really great, it goes beyond my best expectations!

9. Are there any other projects besides this band or is this a full time line up?
Some of the band members such as Valentz and Antarktica have some side projects, but of course DARKEND stand as a priority for all of us.

10. What direction do you see your music heading into on future releases?
It will be a natural progression of what DARKEND are today. Even from “Assassine” to “Grand Guignol” there has been the introduction of new element (such as Gregorian chants, clean vocals..) and I think that we will continue to experiment on that way, trying to render our music even more impressive, vivid and theatrical. We will work a lot on new atmospheres, in strict connection to the different conceptual themes that we will deal with, that’s for sure.

11. What are some bands or musical styles that have influenced your music and also what are you listening to nowadays?
Hmm, quite difficult to say because everyone of us listen to a lot of music and have different musical tastes. Among the genres that can be considered building block for DARKEND I would name black metal of bands such as Emperor, Burzum, Mayhem, Limbonic Art, the occult-oriented NWOBHM (with bands like Mercyful Fate, King Diamond, Angel Witch), classical music of the XIX century, dark/doom metal and obscure music (Sopor Aeternus And The Ensemble Of Shadows to name one of its maximum exponents).
Regarding my musical tastes, I listen to everything listen before plus a lot of progressive prom the ’70 (King Crimson, Yes, Genesis, Van Der Graaf Generator..), ambient/ritual music, classic and death metal..

12. How would you describe your views on Occultism?
I am a lot interested in it, I read a lot and I do a lot of researches, not only concerning  Magic but even Philosophy, Astronomy and Psychology, doctrines that I consider really related to the occult and esoteric side of existence. Magic as a way to see what not everyone can see, Magic as a way to express the greatness of your Soul in all its splendour.

13. Outside of music what are some of your interests?
Oh well, I can really be defined a music-addicted, so a lot of my time is dedicated to music, not only in relation with DARKEND: I love to search and discover new bands, buy and collect their CDs and stuff like that. Beside this I love literature (I read a lot) and cinema, especially concerning horror movies.

14. Any final words or thoughts before we wrap up this interview?
I thank you too for your strong support, for the space granted to DARKEND and for the beautiful words you spent on the “Grand Guignol” review… THANK YOU! I hope to see you soon, all of you! In the meanwhile… keep on spreading our obscure Cult of Horror!

Posted by OccultBlackMetal at 11:49 AM No comments: 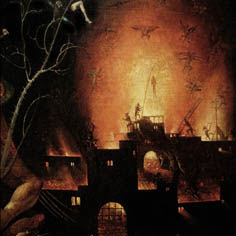 Vocals  are  mostly  high  pitched  black  metal  screams  in  the  more  mainstream  tradition  along  with  some  deep  growls,  whispers  and  a  good  amount  of  clean  signing , while  the  lyrics  cover  Occultism,  Esoteric,  Philosophy  and  Spirituality,  as  for  the  production  it  has  a  very  strong,  powerful,  heavy  and  professional  sound  where  you  can  hear  all  of  the  musical  instruments  that  are  present  on  this  recording.

http://www.facebook.com/darkendofficial
Posted by OccultBlackMetal at 12:19 AM No comments: